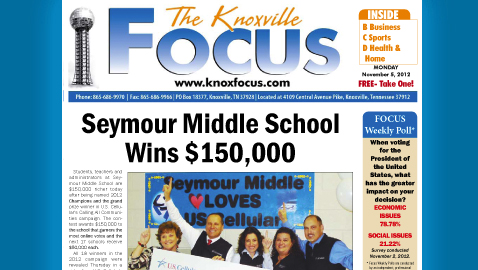 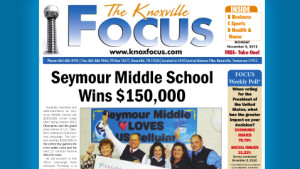 Students, teachers and administrators at Seymour Middle School are $150,000 richer today after being named 2012 Champions and the grand prize winner in U.S. Cellular’s Calling All Communities campaign. The contest awards $150,000 to the school that garners the most online votes and the next 17 schools receive $50,000 each.
All 18 winners in the 2012 campaign were revealed Thursday in a video from U.S. Cellular’s president and CEO, Mary N. Dillon, which was posted on the company’s website (uscellular.com).
For the third year in a row a school in Seymour, Tenn., a suburb of Knoxville with 11,000 residents, has captured the top prize in the wireless carrier’s $1 million nationwide campaign to support education. Seymour Middle School rallied the most votes to take home the $150,000. In 2011, Seymour Primary School was the big $150,000 winner, and Seymour High School won $100,000 the year before.
Seymour joins three other Tennessee schools in the Top 18, including Pickett County High School in Byrdstown as well as Algood Elementary School and Northeast Elementary School in Cookeville.
“It is exciting that Tennessee has four Calling All Communities winners including the grand prize winning school for the second year in a row,” Gov. Bill Haslam said.  “Each of these schools has done a great job of rallying their teachers, parents and communities to compete for this funding.  We appreciate U.S. Cellular and companies across our state and nation that are engaging local communities and making significant investments in education.”
Since U.S. Cellular’s Calling All Communities campaign began, a total of 11 Tennessee schools have a won a total of $950,000.
“We’re inspired by the tenacity and spirit of this year’s winners, who harnessed the support from their friends, families, PTAs, alumni and local businesses to encourage voting from the first day to the final weekend,” said Jack Brundige, director of sales for U.S. Cellular in Tennessee. “We can’t wait to hear about how the schools plan to use the winnings they worked so hard to earn.”