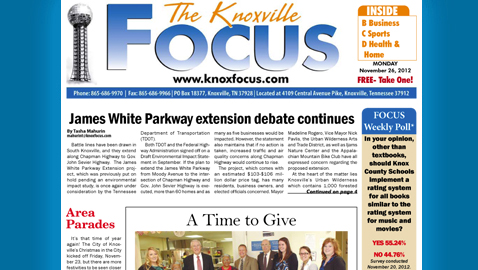 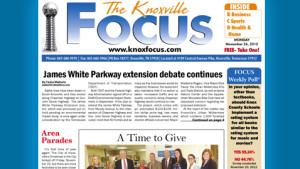 Battle lines have been drawn in South Knoxville, and they extend along Chapman Highway to Gov. John Sevier Highway.  The James White Parkway Extension project, which was previously put on hold pending an environmental impact study, is once again under consideration by the Tennessee Department of Transportation (TDOT).
Both TDOT and the Federal Highway Administration signed off on a Draft Environmental Impact Statement in September. If the plan to extend the James White Parkway from Moody Avenue to the intersection of Chapman Highway and Gov. John Sevier Highway is executed, more than 60 homes and as many as five businesses would be impacted. However, the statement also maintains that if no action is taken, increased traffic and air quality concerns along Chapman Highway would continue to rise.
The project, which comes with an estimated $103-$106 million dollar price tag, has many residents, business owners, and elected officials concerned. Mayor Madeline Rogero, Vice Mayor Nick Pavlis, the Urban Wilderness Arts and Trade District, as well as Ijams Nature Center and the Appalachian Mountain Bike Club have all expressed concern regarding the proposed extension.
At the heart of the matter lies Knoxville’s Urban Wilderness which contains 1,000 forested acres along Knoxville’s downtown riverfront, ten parks, and more than 40 miles of recreational trails. The Urban Wilderness project quickly gained momentum when South Knoxville residents and business faced dramatic consequences as a result of the consequently inconvenient but necessary closure of the Henley Street Bridge.
Since that time, a substantial amount of fundraising and volunteer hours have been contributed towards the realization of the project. The JWP extension could potentially threaten the 35 mile long “Urban Wilderness Trail” which is the centerpiece of the Urban Wilderness itself.
“The JWP extension project had merit in its conception, but since that time everything South has changed for the better with the Urban Wilderness theme and multi-use trail system, and for that reason I oppose the current plans,”  stated Vice Mayor Nick Pavlis, who represents South Knoxville on City Council.
Additionally business owners, who maintain they’ve suffered significant financial loss since the Henley Street Bridge closure, have expressed concern that the project would further isolate business along Chapman Highway.
This concern is echoed by Vice Mayor Pavlis: “I have seen firsthand the devastating effect that the diversion of traffic from Chapman highway has had on our merchants due to the Henley Bridge closure.”
However, TDOT maintains on its website that the project would improve access from the South Knoxville area to the central business district of Downtown Knoxville.
There are many who support the project. The Focus’s independent polling company polled 500 registered voters from within the 9th District, which is the entirety of South Knox County this month. Results indicated that 83% of those polled supported the extension of the project.  The greatest opposition to the extension came from within the city’s 29th Precinct, with just over 30% in support of the extension.
While many residents are appreciative of the Urban Wilderness project, they feel as though the extension would be a good thing for the area, adding to its accessibility, and alleviating some of the traffic concerns along the often fatal Chapman Highway. Proponents are further touting the extension as “the price of progress.”
“I understand the importance of the Urban Wilderness, but I also dread my morning commute along Chapman,” a South Knox County resident told The Focus. “As a mother, I’m very interested in a safer, more accessible route.”
Although TDOT has expressed commitment to the project through various media outlets, a “no build” option remains a part of the ongoing dialogue. A hearing next week will provide the public an opportunity for input on the project prior to selection of a preferred alternative and/or completion of the final environmental document. A brief presentation will be followed by a question and answer period. The public input meeting is scheduled for Thursday, December 6 at South-Doyle Middle School at 5:00 p.m.