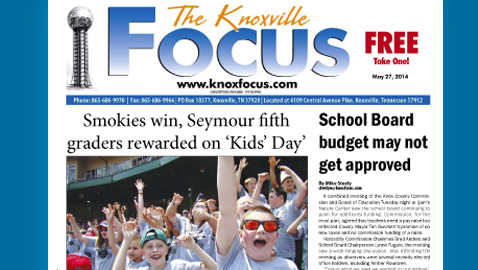 School Board budget may not get approved

A combined meeting of the Knox County Commission and Board of Education Tuesday night at Ijam’s Nature Center saw the school board continuing to push for additional funding. Commission, for the most part, agreed that teachers need a pay raise but reflected County Mayor Tim Burchett’s promise of no new taxes and no commission funding of a raise.

“This is what we said we wanted in our retreat,” Fugate said, with the idea of the two bodies meeting before the commission votes on the county budget.

Anders said the commission has raised per-pupil spending over the last several years but added, “We feel a little under the gun.”

“I don’t think we’d be having this (meeting) if the BEP money was there,” he said. BEP funding comes from the state and has been cut back this year. BEP is the state’s Basic Education Program that returns money to counties for school use, but was cut back for 2015. The school system seems to be asking the county commission to make up the difference and, within that, allot enough money for teacher raises. Mayor Burchett’s budget calls for no pay increase for county employees, including teachers, in order not to raise property taxes.

“The public asks how much more does the school system need and when do we stop?” he said.

“I don’t know if there’s a magic number,” Fugate said, adding  “We just want to be the best school system in the Southeast.”

Third District school board member Doug Harris handed out a per-pupil expenditure chart indicating that the county spends less that the Tennessee average and less per student than Roane and Sevier Counties and the cities of Lenoir City, Clinton or Maryville.

Over the next five years the school board wants about $30 million in additional money with half of it pledged for teacher pay raises. Anders said that over the past five years the commission has raised per-pupil spending every year.

The BOE is pushing the commission to not only approve Superintendant McIntyre’s budget request but make up the $2.5 million decrease from the state. The only way for that to happen would be for the county to raise sales or property taxes.

Commissioner Richard Briggs said that two-thirds of county residents no not favor a tax increase.

Fugate said that if the school board could explain what a tax increase would be used for, a referendum might pass.

McKenzie said our property tax is woefully low. “We’re not funding enough to get us where we want to be,” he said.

Outgoing Commissioner Mike Hammond reminded the two groups of the history of a promise to increase property taxes to build a justice center, which wasn’t built, and to authorize a wheel tax to support schools, but the majority did not got to schools.

Commissioner Amy Broyles, also a Joint Education Committee member, said much of the Wheel Tax went to libraries, which she sees as educational.

Hammond said that if the BOE wants a referendum to raise money for schools, “You’re going to have to see it.”

BOE Member Mike McMillan said that for the public to “buy into something, they have to know the specifics.”

Commissioner Jeff Ownby said raising the per-pupil funding isn’t going to solve the problem. He said the teacher revolt over the past several months “was never about raises, it was about testing.” He then asked McIntyre who pays for the in-class testing of students not mandated by the state.

McIntyre said the information of the testing referred to by Ownby has “some inaccuracies.”

McKenzie chimed in saying, “I thought this (meeting) was about the budget.”

“We give you money but it doesn’t go where it is supposed to go. $7 million was for Pond Gap School but it went to (the new school) at Pellissippi,” Ownby said.

McKenzie said the new school at Pellissippi State at Strawberry Plains was needed and will attract new businesses and then called the Ownby statement “nitpicking.”

“Perhaps the school board has not done a good job in explaining to the public,” Broyles said. She added that she was opposed to a sales tax increase because it would hurt the poorer citizens.

“If this is going to be a ‘nitpicking’ meeting I don’t see a need to be here,” she said.

Hammond told Fugate that the commission doesn’t have the assurance that money authorized would go where it should.

Commissioner Mike Brown, who had been halted several times in the meeting by Chairman Anders, said that some school system supervisors make $80 to $90 thousand per year and said any pay increase should go to the classroom teachers.

“People do not believe in this administration,” Brown said.

At the end of the meeting Fugate said “progress is being made.”

“If we can’t trust the school board to spend the money on what they say they will, I ain’t going to vote for it,” Brown said.

The meeting ended with no obvious change of minds on either side. The commission may vote in their meeting Tuesday on the county budget.