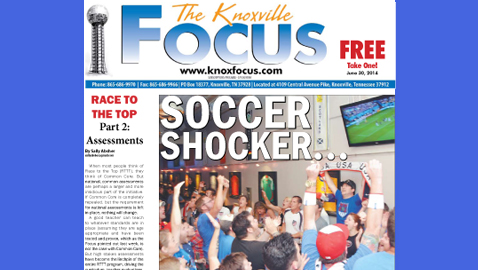 When most people think of Race to the Top (RTTT), they think of Common Core. But national, common assessments are perhaps a larger and more insidious part of the initiative. If Common Core is completely repealed, but the requirement for national assessments is left in place, nothing will change.

A good teacher can teach to whatever standards are in place (assuming they are age appropriate and have been tested and proven, which as the Focus pointed out last week, is not the case with Common Core). But high stakes assessments have become the linchpin of the entire RTTT program, driving the curriculum, teacher evaluations, providing gigabytes of data to share on each and every child, and being the very criteria on which a school succeeds or fails.

Student proficiency was determined by test scores, so an increasing amount of instructional time was spent covering material that was going to be on the test.

Although RTTT was promoted as the solution to the “teach to the test” mentality of NCLB, the assessments mandated as a requirement for grant money and NCLB waivers doubled down on teaching to the test.

Under RTTT, states agreed to evaluate all teachers in all subjects and grades. RTTT uses student test scores as part of the evaluation formula for teacher performance, putting more pressure on teachers to ensure their students “perform” well. (Part 3 will cover Teacher evaluations).

Another consequence of RTTT was that the assessments used by the states under NCLB needed to be revised, or “aligned,” to Common Core. The U.S. Department of Education earmarked $350 million in RTTT grants to develop new assessments for the Common Core Standards.

Two consortia were awarded grant money. The SMARTER Balanced Assessment Consortium (SBAC), the larger of the two, was comprised of 31 states. The other competitor, PARCC, was a consortium of 26 states. There are subtle differences, but both propose nationally uniform, online, computer-based assessments.

State resistance to both SBAC and PARCC has been building. With South Carolina pulling out in April, the number of states in SBAC fell to 22. Just 15 states remain in the PARCC consortia. And parents are increasingly refusing high stakes standardized tests for their kids.

In New York this spring, over 33,000 students opted out of the state required, Common Core-aligned PARCC assessment. That is the same test that students in Tennessee were scheduled to take next year.

But in May, Governor Haslam, Education Commissioner Kevin Huffman, and Fielding Rolston, the Chairman of the state board of education, sent notification that Tennessee was pulling out of PARCC.

What do standardized tests tell us about student proficiency? Kenneth Ye, recent Farragut High School graduate and National Merit Finalist, said in his speech to the BOE last December, “My largest concern is with the influx of high stakes testing and the effect it is having on our students. Ye, a Chinese-American student, refers to U.S. schools as “data run factories,” saying he knows another one of these factories personally.

Ye has been a student of both the American and Chinese systems, and says, “It is inarguable that we see a technical out-performance by the Chinese in standardized tests. But does their standardized victory communicate the creative and inquisitive mindset of our own culture? As someone who can perform on the tests you throw at us, I am not satisfied. I’ve taken your tests. I’ve aced them. I’ve pulled your state averages up. But what I show you on that test is not why I learn….I learn to ask questions, to develop opinions, and to make a difference.”

The KCS PR team has been working overtime to publicize the “all A’s in achievement,” “improved test scores,” and “increased graduation rate” in Knox County. Haslam and Huffman went on a speaking tour earlier this year to tout Tennessee’s improvements on the National Assessment of Educational Process (NAEP) tests.

But a May 2014 report indicates NAEP results for twelfth graders “underscore the failure of federal and state test-driven school policies,” according to the National Center for Fair & Open Testing (FairTest). The report shows “no NAEP score improvement for high school seniors in reading or math since 2009 and little progress over the past decade. Over the same period, performance gaps between racial groups have not narrowed significantly.”

The NAEP trend is consistent with results from the ACT and SAT college admissions tests, where average scores are flat and racial gaps remain. In fact, according to FairTest.org, “over 815 four-year colleges and universities across the U.S., acting on the belief that “test scores do not equal merit,” do not use the SAT or ACT to make admissions decisions about a substantial number of their incoming freshmen classes.”

Notable examples include American University, Arizona State, Brown, Denison, ETSU, Furman, LSU, Sewanee, Texas A&M, Wake Forest, Wheaton College, and many others. In fact, most colleges and universities have found that the best indicator of a student’s success in college is still high school grades, not standardized test scores.

But college-bound students are not the ones hurt most by high-stakes standardized tests. Students from low-income and minority backgrounds, English language learners, and students with disabilities are more likely to be held back, placed in a lower track, or unnecessarily put in remedial education programs. For all the promises of Common Core to close the “achievement gap,” the gap between poor and better off students widened between 2011 and 2013.

Susan DuFresne, Co-Author of Teachers Letters to Bill Gates, wrote “Ask any teacher or principal and we could predict the results of the assessment – students of color, students of poverty, students learning English, and students with special needs will have lower skills….If we can accurately predict the results, then why spend millions on testing and lose valuable time to assessment/data entry when we could put those millions into more teachers to provide more instructional time for the students we KNOW need intervention? Why not provide money for extra instruction to help the children who need it the most?”

And although research clearly shows that standardized tests for grades K-2 are notoriously unreliable, and assessments for these grades are not required under RTTT by either the federal government or the state, some districts, including Knox County, have made standardized tests mandatory for 5, 6, and 7 year olds.

At Dr. McIntyre’s direction, the SAT-10 is a mandatory assessment for grades K-2. The testing is conducted in over four days in May. Children as young as five are required to sit for an hour or more, four days in a row, filling in “bubbles” on an answer sheet. This is not developmentally appropriate.

The KCS Board will tell you that they put programs and initiatives in place to move Knox County towards being one of the best school systems in the country, and that the testing and assessments are necessary to provide citizens with answers about whether these things are effective. But children are not widgets on an assembly line, and the effectiveness of education cannot be measured the same way that factory productivity is measured.

Halls third grade teacher Lauren Hopson recently posted a blog in which she lists some things that “nobody, especially those “education experts” who have never set one foot in my classroom (much less one of their own), would ever know just from looking at my (TCAP) quick scores.” And she lists some of those crazy, zany, spontaneous things that 8 year old kids do and say and experience (speaktn.com/blog/).

She concludes, “None of these things will ever be measured on a standardized test, but when they are out of school, these are the lessons my kids will REMEMBER from being in my room. They will also be the things that will help my students with life more than ANY piece of paper that says “advanced” on it.