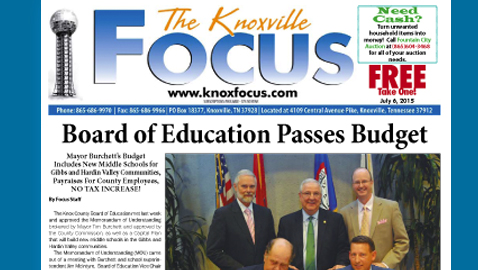 Board of Education Passes Budget

The Knox County Board of Education met last week and approved the Memorandum of Understanding brokered by Mayor Tim Burchett and approved by the County Commission, as well as a Capital Plan that will build new middle schools in the Gibbs and Hardin Valley communities.

The Memorandum of Understanding (MOU) came out of a meeting with Burchett and school superintendent Jim McIntyre.  Board of Education Vice Chair Doug Harris also went across the street to meet with Burchett and the mayor’s staff to help hammer out the agreement.  The end result was Burchett urged the County Commission to give the school system a one-time payment of $3 million, which would be used to keep the bonus fund for teachers solvent.  That allowed the school system to shift recurring dollars to give the teachers a 2% raise.  Burchett’s own budget gave county employees a 3% raise.  Some made much of the fact Governor Bill Haslam’s own state budget recommendation called for a 4% raise for teachers, but Knox County’s school system employs 60% more teachers and personnel than what the state will pay for, causing a reduction in the amount parceled out to teachers.

Knox County Law Director Bud Armstrong and Chief Deputy David Buuck spent a sweltering Sunday afternoon drafting the language in the City & County Building while the air conditioning was turned off.  Armstrong won kudos from just about everybody for his professionalism and working with legislative bodies and department heads frequently at odds.

Mayor Tim Burchett and McIntyre have frequently been at odds since Burchett’s election, usually over spending.  It has been rare that the school system has not asked for more and more funding, but this year the system faced a $6.5 million shortfall.  Burchett made it clear he did not intend to make up the difference and economic growth has been so sluggish that revenue has not come pouring in to the school system’s coffers.  The MOU set out guidelines agreed to by the County Commission and the Board of Education for better fiscal restraint.  The Commission quickly approved Burchett’s budget recommendation, as well as the MOU.  It was up to the Board of Education to either approve the MOU and Capital Plan or reject it and potentially have to implement $6.5 million worth of budget cuts.

The Capital Plan was also controversial with some members of the Board of Education as McIntyre had originally recommended a new Hardin Valley Middle School and a new Northwest Elementary School.  The recommendation for the Northwest Elementary School caught some Board members by surprise as there had been very little conversation about the project.  The Board voted 6 – 3 to add a new middle school for the Gibbs community to the Capital Plan.

The Northwest Elementary School didn’t make the cut in the negotiations between Mayor Burchett and McIntyre, which upset Board member Tracie Sanger.  Sanger has been a member of the Board of Education for just over six months, having won a special election to serve the balance of Indya Kincannon’s term after she resigned.  Sanger doesn’t seem to have the charm or intelligence of South Knox representative Amber Rountree or the passion of Patti Bounds.  At the regular meeting Sanger caught fire from both Karen Carson and Rountree.

Carson, the longest serving incumbent on the Board of Education and an announced candidate for the Tennessee House of Representatives, pointed out Sanger had voted to add a new middle school for the Gibbs community to the Capital Plan originally and was unhappy with the current plan.  Carson told Sanger bluntly that had Sanger not voted to add Gibbs to the Capital Plan, the Board would not likely have been put in the position it was in and told her it was not possible to have “things both ways.”

Sanger tried to imply the County Commission was coercing the Board, noting she had heard the word “fear” used twice and “bullying” once.  Amber Rountree clarified her remarks saying she did not intend to cast aspersions on the Commission, but felt the Board needed to realize the “reality” of its own situation.  Rountree said superintendent McIntyre and the Board had likely not been as fiscally responsible as it could have and should have been.  Rountree also said the Basic Education Plan designed by the State of Tennessee was treating Knox County unfairly.

The MOU and Capital Plan were hotly debated by the Board at both its workshop and regular meetings.  Board member Lynne Fugate groused that she could not support the plan as she felt the Board of Education was surrendering its independence.  Fugate said the Board had tried to cooperate with the Commission in the past but the Board’s pleas for more money and higher taxes had gone unheeded.  Fugate, a banker, noted the local economy was not likely to get better any time soon, which means the schools could not expect new cash infusions.

At the workshop meeting, Vice Chair Doug Harris did an exceptionally fine job of fielding questions and fending off attacks on both the MOU and Capital Plan.  Harris noted Knox County gives a higher percentage of its budget locally than most every other county in the state.

Karen Carson expressed the bottom line for many Board members that just about everybody on the Board of Education routinely said they were for teacher raises, that the Board would make teacher raises a priority, but voting against the MOU and Capital Plan would mean teachers got nothing.  Carson said she didn’t believe the County Commission would send back another budget with more money.  Carson made it very clear she did not believe the plan before the Board was perfect or even very good, but she said it was simply the best the Board could do for teachers, students, and the system.

Terry Hill made an impassioned plea to her colleagues, stating she understood the concerns of some of her colleagues who were not in favor of the MOU or the Capital Plan.  Patti Bounds said her own decision was a difficult one, but was eloquent in sharing with her fellow Board members the needs of her own district.

In the end, the MOU and Capital Plan were approved 6 – 3 with Mike McMillan, Amber Rountree, Patti Bounds, Terry Hill and Karen Carson supporting it.  Gloria Deathridge, Lynne Fugate, and Tracie Sanger voted against it.