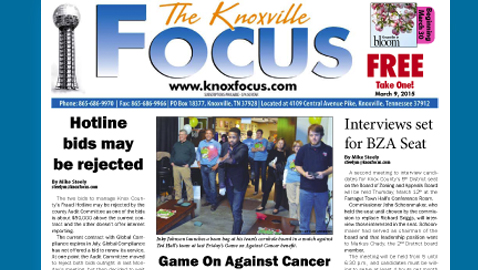 Game On Against Cancer

The fourth annual “Game On Against Cancer” benefit was held Friday at Games & Things with all the money raised going to the Thompson Cancer Survival Center. The event featured games, food, music, a silent auction and a big screen theater room to watch the Lady Vols game being broadcast live. The charity featured local celebrity appearances from all three local news stations, a wide variety of radio personalities, music personalities, and sports legends.

During the event, the celebrities challenged guests to take part in many different types of games. Some of the games played were darts, cornhole, billiards, shuffleboard, ping pong and card games. For those in attendance, this charity allows the community to see the fun and competitive side of local radio hosts, TV hosts, and local celebrities.

One of the many interesting battles that took place on the cornhole boards was between the teams of Inky Johnson and Ted Hall. This battle came all the way down to the wire as both teams made very impressive shots. Inky Johnson was on fire from start to finish as every bean bag he tossed landed on the board and propelled his team to victory. When I asked Inky if he plays Cornhole a lot, he said, “I will start playing more often now.”

As the event was ending, Inky stressed how great an impact this invent means to means to him.  He spoke about how he was attending the event in support of his best friend and former Tennessee Volunteer Eric Berry, who has cancer, along with everybody else who is courageously fighting the disease.

“Just when they thought the only thing I could play was Football. I showed up and beat everybody in cornhole in honor of everybody that is beating cancer,” said Johnson. “It was a true honor to play a small part of something so great with Thompson Cancer Survival Center/Covenant Health.”

The positivity that electrifies the room is what makes this event so great.  It is possibly the only time each year where you can see the off air glowing energy of WATE anchor Theresa Smith as she plays air hockey with a morning viewer. You can watch Hallerin Hilton Hill passionately compete in table tennis with his morning listeners, and then turn around and see Mayor Burchett pull off a trick shot at a pool table. It is an event that brings the stars in the sky back down to earth. Each year, this event becomes more impressive and is a must-go-to social event of the year.