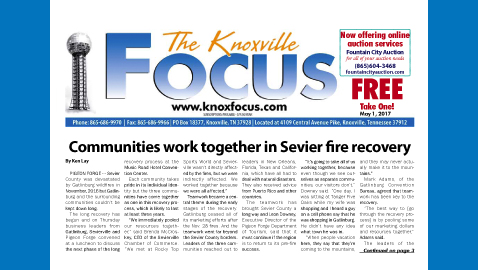 PIGEON FORGE — Sevier County was devastated by Gatlinburg wildfires in November, 2016 but Gatlinburg and the surrounding communities couldn’t be kept down long.

The long recovery has begun and on Thursday business leaders from Gatlinburg, Sevierville and Pigeon Forge convened at a luncheon to discuss the next phase of the long recovery process at the Music Road Hotel Convention Center.

Each community takes pride in its individual identity but the three communities have come together as one in this recovery process, which is likely to last at least three years.

“We immediately pooled our resources together,” said Brenda McCroskey, CEO of the Sevierville Chamber of Commerce. “We met at Rocky Top Sports World and Sevierville wasn’t directly affected by the fires, but we were indirectly affected. We worked together because we were all affected.”

Teamwork became a central theme during the early stages of the recovery. Gatlinburg ceased all of its marketing efforts after the Nov. 28 fires. And the teamwork went far beyond the Sevier County borders. Leaders of the three communities reached out to leaders in New Orleans, Florida, Texas and California, which have all had to deal with natural disasters. They also received advice from Puerto Rico and other countries.

The teamwork has brought Sevier County a long way and Leon Downey, Executive Director of the Pigeon Forge Department of Tourism, said that it must continue if the region is to return to its pre-fire success.

“It’s going to take all of us working together, because even though we see ourselves as separate communities, our visitors don’t,” Downey said. “One day, I was sitting at Tanger Five Oaks while my wife was shopping and I heard a guy on a cell phone say that he was shopping in Gatlinburg. He didn’t have any idea what town he was in.

Mark Adams, of the Gatlinburg Convention Bureau, agreed that teamwork has been key to the recovery.

“The best way to [go through the recovery process] is by pooling some of our marketing dollars and resources together,” Adams said.

The leaders of the three communities’ commerce departments were able to receive free television advertising and radio public service announcements from media outlets in Atlanta.

The event was hosted by Internet Marketing Expert Group and IMEG CEO Justin James said that businesses in Sevier County must now work to sell the Smoky Mountains as well as their attractions.

“Now, you have to sell the Smoky Mountains,” he said. “They used to sell themselves.

“I get calls all the time asking if Gatlinburg and Pigeon Forge are destroyed. I think the media takes a negative hit, but I blame the public because you have headline readers. I got a call from a woman on a military base and she asked if Gatlinburg is destroyed. She said that she read a headline, but she didn’t read the article.”

McCroskey said that the perception of mass destruction is also close to home.

“People in the Tri-Cities think that Gatlinburg and Pigeon Forge have been destroyed,” she said. “That’s two hours up the road, folks.”

McCroskey also noted that the city of Sevierville looks to move forward.

“For us, it’s business as usual,” she said. “We’re not mentioning anything about the fires.”