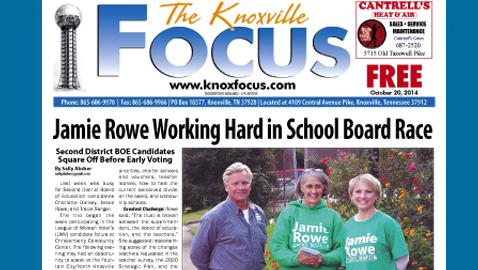 The trio began the week participating in the League of Women Voter’s (LWV) candidate forum at Christenberry Community Center. The following evening they had an opportunity to speak at the Fountain City/North Knoxville GOP meeting. Early voting began Wednesday October 15.

At Monday’s LWV Forum, candidates shared their views on the greatest challenge facing the school system, the teacher advisory council, funding priorities, charter schools and vouchers, teacher morale, how to heal the current perceived divide on the board, and community schools.

Greatest Challenge: Rowe said, “The trust is broken between the superintendent, the board of education, and the teachers.” She suggested implementing some of the changes teachers requested in the teacher survey, the 2020 Strategic Plan, and the teacher advisory committee.

Dorsey said communication and a lack of trust are serious problems. She added, “We are in a bad spot, and it has to do with changes in society, technology, cultural changes.” She said “Money is always a problem. There is never enough.”

Sanger said, “I think the biggest problem we have on the school board, and in the community is civility…in the way we deal with issues in our school system.”

Common core and teacher TVAAS scores being based on test scores:  Rowe said common core is a state issue, but pointed out the standards were written by people outside of the education community, and there was no field testing prior to implementation. She disagrees with linking teacher evaluation to student TVAAS (TN value added assessment) scores.

Dorsey said, “We need national standards or guidelines, but we do not need mandates from the federal government telling each state how to set up their curriculum and instruction.” She said the standards need to be aligned with the testing.

Priorities for school funding: Sanger mentioned teacher pay, and said she likes the strategic plan goal of “getting a personal learning device in every child’s hand.”

Rowe said, “We need to keep as much of the funds as we can in the classroom.” She supports instituting pre-K in priority schools. She said, “we need to repair existing school buildings so that every child has a safe healthy clean environment in which to learn,” and get the state to re-evaluate BEP funding so that “Knox County gets its fair share of state money for education.”

She also criticized the administration for spending nearly $400K on a study by Boston-based Parthenon Group which recommended increasing class size, firing librarians, school nurses, and custodians. (The total cost of the study was $1.2M but a Gates Foundation grant paid the remaining $800K).

Dorsey voiced concerns about keeping up with technology, adding that her grandson in the 8th grade has his own laptop. She said “I think every child should have that opportunity.” She said teacher pay needs to be increased, and that facilities need to be maintained and repaired in a “fair and equitable way.”

All three candidates are opposed to further efforts to outsource or privatize some services such as custodial and cafeteria services.

Charters and vouchers: None of the candidates currently support a voucher system, but two support charter schools.

Rowe said that vouchers can have an unintended consequence of closing neighborhood schools. She said she is similarly opposed to charter schools. She said the original concept was sound, but they have “become a money making venture.” She mentioned an AP story that the FBI is investigating charters in five states because of fraudulent use of funds.

She added, “There are 6000 charter schools in the US now, a 50% increase over 2008. In that same period, 4000 public schools have closed.” She said, “The strongest schools in the world are in Finland and Japan, and these are strong public schools. Privatization is not the answer.”

Dorsey, a retired principal, who has spent her entire career in public education, said, “Sometimes a charter school can have a unique environment that only serves certain kids. I think we have to take them one by one…Knox County has done a great job of looking at the applications…but the Emerald Academy that is coming to Knox County, I think is a good idea for those children.” She added that she would like to see very close monitoring.

Sanger said, “Charter schools can be a good thing, in theory…Charters can give an opportunity to try new things, new curriculums, new calendars. If something is not working they don’t have to go through all the red tape – they can change it over the weekend.”

She said “In theory, when a charter school finds something that works, they would filter it back to the low performing schools.” She added, “Emerald Youth has a charter that has been approved, and I’m going to support it. It is good in theory.”

Current Divide on School Board: Dorsey said “perceptions are reality,” but said she didn’t think the divisiveness was going to last, adding, “People are looking at the issues, and we all want what’s best for kids. Kids come first.”

Sanger said “We need to be more civil to one another. There has been a lot of finger pointing and bickering going on in the past year or so.”

Rowe concluded, “Everyone wants what is best for the children and education, but maybe we have different ways of looking at how we get there.”

Community Schools: All candidates support community schools, but only Rowe named the two community schools in the district (Christenberry and Inskip). She has visited and met with the administration and staff at the schools. She said this is one way to address and bridge the “achievement gap” by meeting the needs of the whole family. Dorsey worked at Sarah Moore Greene, one of the first Community Schools in the area.

The following evening the candidates met up again at the Fountain City/North Knoxville GOP meeting. The first question was the classic “would you have supported an extension of Dr. McIntyre’s contract?” All of the candidates agreed there was no need to extend his contract at that time.

One of the more interesting questions was from Rep. Bill Dunn, who asked, “Are the schools getting better than they were 10 years ago, are better things happening, are kids coming out better prepared?”

Charlotte Dorsey said “I think things have changed considerably since I was the principal of Bearden Elementary…Teachers are given mandates on how to teach, rather than being creative and spontaneous. Schooling has changed. How we use technology has changed. Lap tops …smartboards…You are seeing a lot of pop. But I’m not sure kids are coming out any better… Kids can’t make change at the register if the computer is down.”

Tracie Sanger said, “I think they’re better. Tennessee was recognized as having the fastest academic growth in the country.” She said we still have a long way to go, with our ACT goals “in the 90s for the next five years. We’re in the 20s now.” She said now you see more teachers teaching all the time. I definitely think we are on the right track.”

Jamie Rowe disagreed, and had the facts and figures to back up her statements. “Right now, 53% of our third graders do not read at grade level…Graduation rates are going up, but they are inflated by adding the certificate of attendance in, padding the grades, “blitzing” and credit recovery, where a student gets credit for repeating a class and an additional credit in “skills for success,” so you are actually rewarding them for failing the course.”

“But at the same time, only 21% of children graduating are meeting the ACT benchmarks for college and career readiness in all four subjects: math, science, reading, and English…Those rates have stayed steady for three years.  I don’t think we’re doing as well.”

No one in either venue asked the $43,000 question regarding the huge amount of money that has flooded into the Sanger campaign from outside of the Second District, primarily from 10 members of the Haslam family ($15,000 total) and other chamber members.