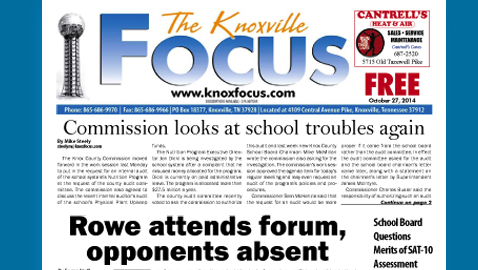 The idea came from a conference attended last spring by the two commissioners. The conference was the annual National Association of County Officials in Washington, D.C.

Ownby said the idea came to him and Broyles by another county commissioner from another state. “He told me about how Democrats and Republicans worked together, and I thought it was good idea to do. Amy and I don’t always agree on everything politically but we have a good friendship and I thought we could work together on this,” said Ownby.

All candidates outlined their platforms. Education and employment underline Johnson’s main platform. She has concerns about teachers “losing a seat at the table,” jobs, and wants to broaden the discussion about domestic violence.

The candidates were asked a multitude of questions, but the majority of them were about some matter of education, either on the state or local level.

Perhaps the most interesting question from the audience was, “What’s the biggest untrue thing that’s been said about you during the campaign?”

Jamie Rowe said that she’s been referred to as a politician. She said, “I’m not a politician, but if being involved and working for good government make me a politician, then I suppose I am one.”

Johnson said the biggest untruth about her is that, “I’m in the pocket of special interests.”

Siler’s untruth is her position on Amendment 1 to the state constitution. “I will vote no on Amendment 1, but I’m not pro-abortion. I support privacy.”

Rowe was asked if she believed the school board needed more money from Knox County on the local level. Her response was, “Until it’s proven that the school system can spend efficiently, no!”

In response to another question, Rowe said, “Central Office employees salaries are too high.”

The next “Town Hall Meeting” will be Nov. 13, somewhere in the Second District, where Broyles represents. West High School is in the Fourth District, represented by Ownby.