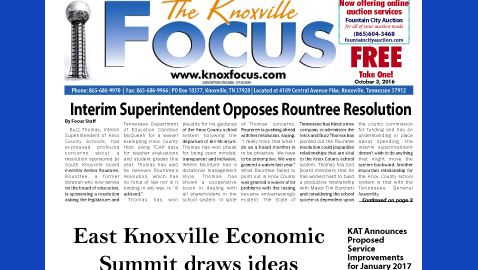 Buzz Thomas, Interim Superintendent of Knox County Schools, has expressed profound concerns about a resolution sponsored by South Knoxville board member Amber Rountree. Rountree, a former librarian who now serves on the board of education, is sponsoring a resolution asking the legislature and Tennessee Department of Education Candace McQueen for a waiver exempting Knox County from using TCAP data for teacher evaluations and student grades this year. Thomas has said he believes Rountree’s resolution, which has no force of law nor is it binding in any way, is “ill advised.”

Thomas has won plaudits for his guidance of the Knox County school system following the departure of Jim McIntyre. Thomas has won praise for being open minded, transparent and inclusive. Where McIntyre had a dictatorial management style, Thomas has shown a cooperative touch in dealing with all shareholders in the school system. In spite of Thomas’ concerns, Rountree is pushing ahead with her resolution, saying, “I really think that what I do as a board member is to be proactive. We have to be preemptive. We were granted a waiver last year.” What Rountree failed to point out is Knox County was granted a waiver after problems with the testing became embarrassingly evident. The State of Tennessee has hired a new company to administer the tests and Buzz Thomas has pointed out the Rountree resolution could jeopardize relationships that are vital to the Knox County school system. Thomas has told Board members that he has worked hard to build a productive relationship with Mayor Tim Burchett and considering the school system is dependent upon the county commission for funding and has an understanding in place about spending, the interim superintendent doesn’t wish to do anything that might move the system backward. Another important relationship for the Knox County school system is that with the Tennessee General Assembly.

Many of the concerns expressed in Rountree’s resolution were addressed by Buzz Thomas in an email to all board members. Thomas pointed out cut scores are always set after a standardized test is administered. Thomas also assured board members that local teachers would be participating in the process by serving on the review committees for the test. Thomas also noted the American Educational Research Association’s recent report, a report cited by Rountree in a communication sent to board members, has eight recommendations, all of which Thomas says Tennessee has met.

Buzz Thomas has urged board members to remember that the school system can ask for a waiver at any time, especially if there was a problem with the test. Thomas reminded board members when the difficulties with the test occurred last year, Governor Haslam, legislators and Commissioner McQueen were all helpful and the interim superintendent believes that would be the case again if there should be the slightest trouble with the new statewide test.