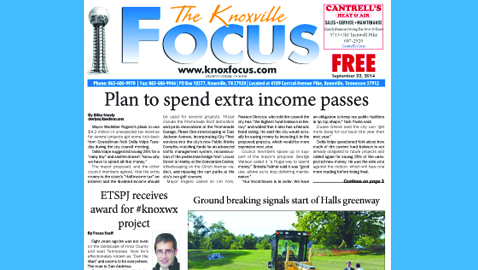 Mayor Madeline Rogero’s plans to use $4.3 million in unexpected tax revenue for several projects got some kick-back from Councilman Nick Della Volpe Tuesday during the city council meeting.

Della Volpe suggested saving 25% for a “rainy day” and said he doesn’t “know why we have to spend all that money.”

The mayor proposed, and the other council members agreed, that the extra money is the state’s “Hall income tax” on interest and the dividend income should be used for several projects. Those include the Promenade Roof demolition and patio renovations at the Promenade Garage, Phase One streetscaping at East Jackson Avenue, incorporating City Fleet services into the city’s new Public Works Complex, matching funds for an advanced traffic management system, reconstruction of the pedestrian bridge from Locust Street to Henley at the Convention Center, streetscaping on the Clinch Avenue viaduct, and repaving the cart paths at the city’s two golf courses.

Mayor Rogero called on Jim York, Finance Director, who told the council the city has “the highest fund balance in history” and added that it also has a historic bond rating. He said the city would actually be saving money by investing it in the proposed projects, which would be more expensive next year.

Council members spoke up in support of the mayor’s proposal. George Wallace called it “a frugal way to spend money.” Brenda Palmer said it was “good use, allows us to stop deferring maintenance.”

“Our fiscal house is in order. We have an obligation to keep our public facilities in tip top shape,” Nick Pavlis said.

Duane Grieve said the city can “get more bang for our buck this year than next year.”

Della Volpe questioned York about how much of the current fund balance is not already obligated to future projects and called again for saving 25% of the unexpected new money. He was the sole vote against the motion, which will face one more reading before being final.

A future city parking garage in the Cumberland Avenue development saw some discussion as the council voted to approve a redevelopment and urban renewal plan there. The idea of declaring Cumberland Avenue a blighted area in order to request federal or state funding came up but the motion passed. Nick Pavlis said that Cumberland Avenue is an “extension of downtown” and that there are few places for non-UT citizens to park there.

He said a parking garage, which has no site selected yet, is “critical for the success” of the project.

After a few questions about the public being permitted to use the Carl Cowan Pool inside the Dr. E.V. Davidson Recreation Center, the council voted to permit the Emerald Youth Foundation to lease the pool for one year. The public will still be permitted to use the pool, where the foundation is planning to offer swimming lessons for adults and children.

An ordinance to amend the city code regarding small child day care in homes was tabled by Pavlis who told the council that the prior action by that body in denying an application will go to litigation November 13th. The Metropolitan Planning Commission had worked to revamp the city’s codes to allow daycare for up to 4 non-related children in all residential areas as a right without a permit or license.

The council also passed a motion allowing the mayor to work with the county mayor toward hiring a new director for MPC. A search committee will apparently be appointed when the Knox County Commission passes a similar motion in its meeting today. After applicants are accepted and interviews conducted, Mayors Rogero and Tim Burchett would choose a replacement for retiring director Mark Donaldson.

The council voted to pass a resolution asking the state department of transportation to permit logo signs in the area of Knoxville City Mall and also to authorize the mayor to enter into an agreement with the state to repair, update and modernize the city’s traffic control system at an estimated cost of $7 million, with the city’s share to be $1.4 million.