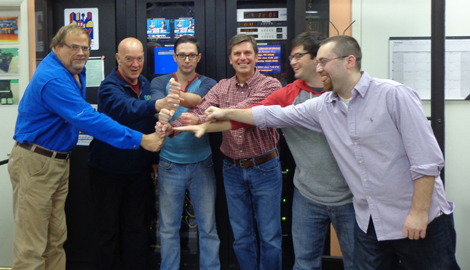 In less than a month Community Television of Knoxville (CTV) will begin its 40th year of service with a long history of providing local programming that started on Christmas Eve in 1975. The station has changed drastically since those early days and now provides a wide variety of content to the viewers on our four cable systems.

Every week, viewers of CTV on Comcast, Charter, WOW and AT&T U-verse can tune in and see local programs ranging from various church services and wrestling to city council meetings and partisan political call-in shows.

CTV is a non-profit 501c3 corporation, funded by the city and county with fees derived from the cable franchises. The cable companies pay 5% of their revenue for the franchise and CTV gets 1.5% of that, using no tax dollars from sales tax or property tax.

“We don’t look like commercial television. Our viewers don’t expect that.  We don’t have $100,000 cameras,” says David Vogel, General Manager. “It’s the content people are interested in watching.”

Vogel said many of the programs at CTV are produced in people’s homes or churches and are submitted to the station. “We used to do a lot of studio training and community residents would come in to record their shows.  Nowadays, many just drop by the station to deliver their shows.  Some even submit them online.”

If you are a community resident and want to go to the station to learn, shoot or edit your own show (or shows) you can do that for just $24 per year – not per show, but per year.  So, you can submit a show for every week, occasionally, or just one time, all for one annual payment of $24.   This year, more than 150 locally produced video projects have generated nearly 2,800 different episodes.

When a program airs on CTV is determined by a random drawing held twice a year.  This was started 15 years ago, Vogel explained, to give everyone an equal opportunity for whatever might be considered the “best” time slot.  Rotating the time slots also allows each project to expand its audience.  Loyal viewers will record programs whenever they air to view them when it is most convenient for them.

“Christmas Eve at St. John’s Church in 1975 was our first program. When the cable company first came in and the channel was allocated by the city.  St. John’s offered space in their basement and we aired their church services,” he said.

As Vogel left his desk to take care of a matter Kevin Jeske, Assistant General Manager, was busy scanning clips of archived programs from over the years, looking for shows he could feature in a CTV documentary that is being created to air later in the year closer to the anniversary.   “We’ll have a special event on the first Friday in October,” he said “to kick off our 40th anniversary.”

Jeske ushered The Focus around the facilities, located at 808 State Street in downtown Knoxville, which include three studios, two edit suites and a new Internet “radio” studio. This new concept has not been officially announced yet. www.RadioKnox.org  is a place where people will be able to voice family history, tell stories, etc, for preservation purposes.

Some of the shows on CTV are produced in the studios at CTV, like the Republican and Democrat shows that air live each week.  Others, like the various government meetings, are covered using permanently installed cameras. “We do balanced programming and that’s what we strive for: to build dialog in the community,” Vogel said.

“When I started here in 1987 it took 4 people to produce a program. Now the cameras are robotic and you can produce a show with one production person and edit it on a computer,” he said.

This year community residents associated with 41 active video projects regularly used the CTV studios to record their programs.  Residents associated with 10 other projects regularly used the studios to air “live” programs.  Community residents filming at home or remotely produced many more programs for 72 other active video projects.  In addition, the very busy staff at CTV regularly produced programs for more than 30 government video projects in the assembly rooms at the City/County Building.

“The $24 per year covers your training, airtime and everything,” Vogel explains, “and you get to use our facilities for a year.” He said if you want to air a regular series you must have produced at least 4 before any of the shows air.  People who produce shows that air on CTV all must sign a form declaring they are completely responsible for the content.

“CTV is not responsible for the content of programs produced by community residents.  Neither is the CTV board, nor is the city or county – only the residents who produce them,” Vogel explained.

Potentially controversial programs air in overnight slots, which Vogel says balances freedom of expression with the right to protect children from potentially offensive content.  He further explains that worldwide exposure on YouTube has removed the appeal of shock and controversy that used to be an incentive for some to produce programs for community television.

Vogel said CTV has a potential viewing audience of 110,000 cable subscribers in Knox County, but since the system doesn’t subscribe to Neilson Rating, CTV has no idea how many viewers are watching.

In addition to providing live gavel to gavel coverage of local government meetings, CTV also records them to air on other days, (late at night, etc.) so viewers can watch them whenever their work schedule will permit.  CTV also provides a live stream of the channel at their web site www.ctvknox.org and posts recordings of some of the recent local government meetings.  So, in that sense, you don’t actually need a TV to watch CTV.