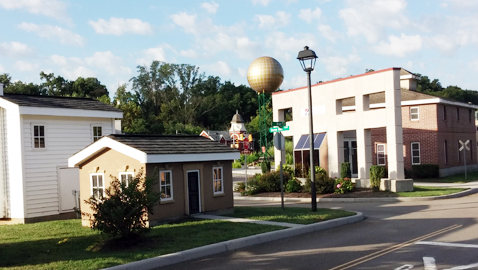 Photo by Mike Steely.
Knoxville’s Safety City has child-size replicas of area landmarks as well as a miniature residential neighborhood.

Knoxville is the only city in Tennessee with a special “Safety City” that teaches children, especially 2nd graders, about traffic and fire safety. The facility, at 165 South Concord Street between Sutherland Avenue and Kingston Pike, is a city in miniature and hosts more than 15,000 children, parents, teachers and groups each year.

Within the complex are miniature replicas of many Knoxville buildings, including a residential replica, downtown section, the Sunphere, and many other buildings. Some were built from donations by companies, like Shoney’s Restaurant, and some duplicate public buildings.

In between the many buildings are striped city streets with stop signs, pedestrian crossings, direction signs and even railroad crossings.

During the school year various county second graders arrive by bus to attend a four- or five-hour visit that starts with some classroom traffic and fire safety lessons and then the children are taken into the miniature city streets and allowed to drive the little cars or bicycles along the streets. The visit also includes a visit to a house that has been prepared with examples of fire hazards the children can identify and two bedrooms where the children are taught how to crawl to safety or use an emergency escape latter from a second story window.

“Some children have said a visit here is better than Dollywood or Disneyland,” said Vicki Dagnan, Safety City Director. She and a full time staff of three, along with volunteers, see about 7,000 second graders each year and about 8,000 other visitors for special events.

The City Council recently allocated more than $600,000 for the construction of eight more buildings which will, according to Dagnan, will include a downtown Yogurt Shop, a hospital heliport, a gas station, car wash, town clock, post office, the Southern Railroad Depot,  and a replica of Neyland Stadium.