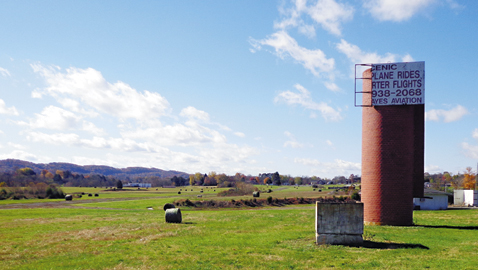 Photo by Mike Steely
The former Powell Airfield may eventually become a large Kroger Shopping Center but for now the project has been postponed as the company revises its plans, originally calling for completion in 2015.

Kroger has asked for a postponement on its proposed store and shopping complex as the corporation changes its plans and redesigns the entry and exits at the site, located at the former airfield on Emory Road near Interstate 75.

Tom Brechko of the Metropolitan Planning Commission’s Subdivision and Development Plan Review section told The Focus that Kroger gets an automatic postponement of its request while a traffic plan is conducted.

He said the original plans called for one entrance on Emory and one on Central Avenue Pike but the new plans call for two entrances from Emory. Originally, in 2013, Kroger planned to open the shopping complex in 2015 but now plans will probably be delayed. The MPC approved the original plans, granted a PC-1 zoning and Kroger purchased the property.

There’s some fill that will be needed there because part of the 18.7 acres is in the flood plain. When finally completed, according to the new proposal which includes some parking and circulation changes, the shopping center will increase about 15,000 square feet. Originally the plans called for an 83,351 Kroger Store and about 20,000 square feet of retail shops.

The airfield, long noted as a landmark in Powell, was built in 1951 by Norman Mayes and eventually offered airplane rides, charter service, and pilot lessons. It has been closed for several years.

Kroger will probably revisit the MPC with an updated traffic study and request approval of the revised shopping complex plans. Brechko said the first postponement on the new plans is automatic but the MPC would need to approve a second postponement.

The MPC will also consider a request by the Arlington Baptist Church for its Meridian Assisted Living at Arlington Place. The facility is located at Lifespring Lane and McCampbell Drive and the church is asking to add 4 beds to the proposed facility without changing the master plan.

In this week’s meeting, the planners will also take nominations for its officers for next year, consider educational uses in three zones including shopping centers, and look at private clubs within general industrial zone districts.

They will take up amendments to ordinances regarding signs, pet services, two requests for street closures including part of Forest Avenue near the World’s Fair Park, and review final subdivision plans for 24 locations. Those plans include the Greenway resubdivision of 7 lots west of Old Broadway on Tazewell Pike.

They will also look at 6 rezoning requests and 7 use-on-review requests.

The MPC’s agenda review meeting is at 11:45 Tuesday and the regular meeting is at 1:30 Thursday in the main assembly room of the City-County Building.