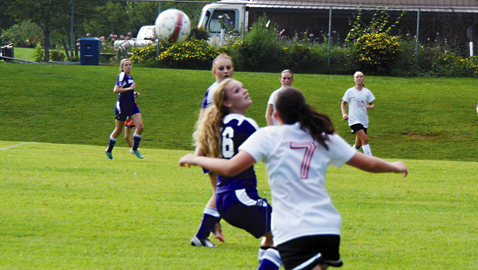 Horner saw the Lady Devils pepper Sevier County’s defense with 21 shots in a 2-1 victory at Halls.

The Lady Devils (1-0) won the match by the narrowest of margins but the outcome could’ve been worse for the Bearettes if not for the play of goalkeeper Emily Lavoie. Who stopped 19 shots, many of which were point-blank scoring chances for the host Lady Devils.

“She did a good job,” Horner said of Lavoie. “She was pretty fearless and that’s how she has to be and that’s what you have to have.”

Halls outshot Sevier County 9-6 in the first half but didn’t get on the board until the 34th minute when Simone Horner made a pass to Mackenzie Brantley, who promptly banged a long shot past Lavoie an into the back of the Sevier County net.

Halls was more dominant in the second half as its defense surrendered just three shots after the break.

Lady Devils’ netminder Taylor Stephens made eight saves and lost her shutout in the 89th minute of the match when Lily Wyatt scored on a long shot.

Halls picked up its second marker in the 74th minute when Daniela Jones scored an unassisted goal.

Horner was especially pleased that every player who dressed got an opportunity to play. The coach was also happy that his squad took some shots.

“At least we’re getting shots,” Horner said. “That’s more than we did last year.

“We did well and we got everybody off the bench and that was very valuable to me.”