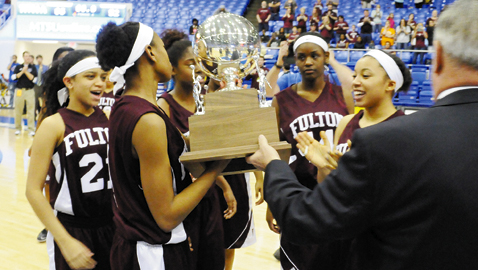 After becoming the first in school history to make it to the TSSAA state tournament, the Lady Falcons advanced to the championship game before falling to Elizabethton 66-52 on Saturday night, March 8, at Middle Tennessee State University in Murfreesboro.

“I felt like we did something that nobody expected,” said Coach John Fisher back in his office at Fulton last week.

Still, a lot of teams across the state would have liked to have been in the Lady Falcons’ place at Murphy Center when they were awarded the Silver basketball for placing second.

Fulton upset No. 5 Gatlinburg-Pittman in the district finals and ousted No. 1 Grainger in overtime in the state sectionals. No. 2 Cannon County, a rock’s throw from The Boro, bowed in the state quarterfinals, even though the Lionettes boasted Abbey Sissom, the eventual Miss Basketball Class AA winner. No. 4 Creek Wood was an overtime victim in the semifinals.

“We did a poor job on the defensive glass and shot 18 percent,” said Fisher in a television interview at halftime. “You can’t win shooting 18 percent.”

Fulton warmed up after intermission, but the hole was too deep. A fourth period rally got the Lady Falcons as close as 11 (59-48) with 2:10 left.

Fulton was led by their two freshmen standouts. Quay Hines, a guard, poured in 26 points and had nine rebounds. Six-foot-one post player KeKe McKinney, who sat out most of the third period in foul trouble, tallied 14 and claimed eight rebounds.

Elizabethton made 49 percent of its field goal attempts and connected on 6 of 10 from 3-point range. Fulton’s first-half shooting woes: 5 for 27 from the field, 0 for 6 outside the arc and 5 for 10 at the free throw line.

In its semifinal win, Fulton relied on the outside shooting of Moneisha Thomas and Brittani Whiteside, who combined for seven 3-pointers, as McKinney managed only five points. Senior Tyanna Castle chipped in 10 points and 10 rebounds. McKinney also snatched 10 boards as Fulton won the backboard battle 39-23.

Hines, McKinney and Castle represented Fulton on the all-tournament team.

Looking back on the season, Coach Fisher knew right from the start the two freshmen were going to be “really good.” His team went 12-0 in summer ball. Even though Kay Kay Fain, an athletic junior guard, went down with a season-ending knee injury in the last preseason scrimmage, “I knew this team had the potential to be very good,” said Fisher.

“We had a renewed focus after we lost to Gatlinburg-Pittman a second time.” pointed out Fisher. “We got a little bit tougher . . . We didn’t lose again until the state championship game.”

Fisher also called his kids “tough-minded,” for surviving in overtime “four or five times” during that stretch.

The future of the program is “extremely bright,” said Fisher, “(but) we’ve got to work like every team in the state. You start off 0-0. You can’t show up and win – we know that.

“Is the talent there? The talent’s there. But it’s what you do with your talent.