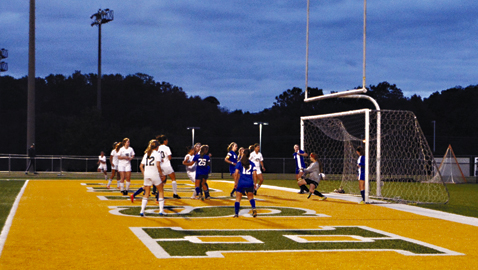 “We started a little slow and we woke up a little late tonight,” Lady Irish coach Mark Leader said after his team came from behind to win the district championship with a 3-1 victory over Christian Academy of Knoxville on a chilly evening at Blaine Stadium.

Catholic, the tournament’s top seed, fell behind the Lady Warriors 1-0 in the fifth minute when junior midfielder Emily Threatt scored for the visitors.

“This was a good game and it’s always great to play them,” Leader said. “We’ll probably see them again.”

Catholic missed a pair of early opportunities to score the equalizer but CAK freshman goalkeeper Skyler Woidtke made some early saves and was aided by several Catholic shots that either hit the crossbar or the goalposts.

Woidtke put up a stellar first-half effort before Catholic’s Ashley Hickman scored the tying goal with just over five minutes left before halftime.

“She’s come a long way,” Estus said of Woidtke. “She’s a freshman and she’s been starting for about six weeks now and she’s really worked hard. “We competed hard tonight and these girls are going to bang heads.

The game was different from the regular-season meeting between the two Cedar Bluff rivals. Catholic routed the Lady Warriors that night.

Catholic took the lead for good when Hickman headed in a throw-in from freshman Vanessa Belanger in the 46th minute.

“We came out a little too cocky,” said Hickman, the University of Cincinnati commitment who completed her hat trick when she closed out the scoring in the 64th minute. “We have a long road ahead and it’s going to be tough.

“We knew that this one wasn’t going to be easy.”

Both the Lady Irish and CAK advance to the Region 2-A/AA Tournament, which opens Tuesday night. Catholic will host Grace Christian Academy while CAK travels to play Rockwood.

Kickoff times were not set at press time. The winners of Tuesday’s region semifinals will advance to the title game Thursday and to the sectionals on Saturday, Oct. 25.