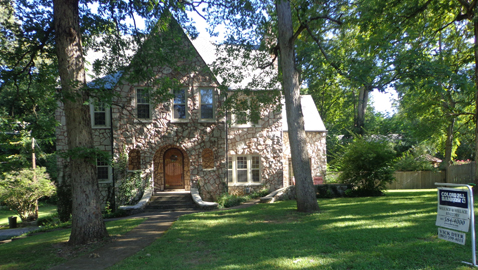 Photo by mike steely.
Want a historic home in Lindbergh Forest? This home, at 229 Chamberlain Boulevard, is a 2-story Tudor Revival built in the 1930s using East Tennessee Marble and is for sale.

It has taken a while for the  Lindbergh Forest neighborhood to get organized, but, now under new officers they are ready to kick-start their efforts and revitalize their territory.

“It’s been several years,” the new President of the Lindbergh Forest Neighborhood Association, Kelley DeLuca, told The Focus. She explained that the new group initially began last January and initially decided to include people living on both sides of Woodlawn Avenue and in the vicinity of Dogwood School.

Other officers include Amanda Morris as Vice President, Heather Ream as Secretary, Stephanie Greene as Treasurer, and Jewell Minnich as Neighborhood Watch Coordinator.

The historic neighborhood includes that portion east of Chapman Highway, enclosed by Moody Avenue, Woodlawn Pike and Chapman and including the streets of Chamberlain, Southwood, Glenhurst, Druid, Tall Oaks, Ellis, Tipton and Tiliwa. It includes a portion within the Historic District, which is on the National Register of Historic Places.

Developed in the 1920s Lindbergh Forest was one of Knoxville’s first “automobile” suburbs and is noted for the use of East Tennessee Marble on many homes. Several dozen homes there were added to the National Register in 1998. Although the neighborhood is just off Chapman Highway it has lots of trees, nice streets, and is quiet and peaceful.

It was the completion of the Henley Street Bridge and the creation of the Great Smoky Mountain National Park that really boosted the neighborhood. Residents there have since fought off commercial development.

The historic district has 38 houses and 10 garages so recognized. Streetscapes there and lamp posts have added to the historic designation. Many homes are Tudor Style along with Colonial Revival, Bungalow, and Modern. Two of the homes are “Lustrom” houses that were pre-fabricated and built to meet the growing housing shortage after World War II.

She said the association has named a committee to look at an entrance sign and funds from the former association, raised from Christmas Home Tours there, are ear-marked for a sign. Another project involved “Painting the Pavement” there to identify the special neighborhood. Holiday socials are being discussed for Halloween and Christmas as well as getting some connection to nearby greenways and parks.

“We’ve expanded the former neighborhood boundary in order to get more people involved, including renters, landlords, the school or anybody who is interested,” DeLuca said.

The Lindbergh Forest group meets at 6:30 p.m. on the third Wednesday of each month at Graystone Presbyterian Church at 139 Woodlawn Pike. You can reach Kelley DeLuca at (865)660-4728 or email her at kelleydeluca@gmail.com.

The neighborhood watch meets in conjunction with the new association and shares members.

“We have open meetings and everyone is invited. We have a policeman there who keeps us informed about any crime, but there’s very little crime here,” she said.

The effort of the new association is recognized by the Knoxville Office of Neighborhoods and the historic region South of the River is once again vital and moving forward.