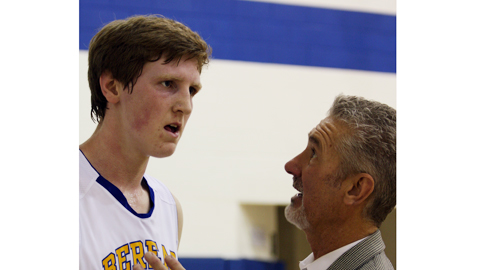 Veteran Coach Chris Lindsay gives instructions to Berean Christian School’s 6-8 Nathan Hastings. The Eagles also have two 6’6 players, making them one of the tallest Class A teams in the state.

A while back, a curious Chris Lindsay figured up the number of high school boys varsity basketball games he had coached in his long career.

That number, which included 611 games in 22 seasons at West, reached the 700-plateau recently in his fourth season at Berean Christian School.

“I’ve never counted wins and losses, just the games,” said Lindsay, who was recognized by Berean on the milestone occasion Jan. 6 when his Eagles hosted The King’s Academy.

“When you talk about – Oh I won so many games – to me that kind of shines the light on you, and that’s not what I’m happy about. I’m happy that the good Lord has given me the strength to work with kids this long, and had a family that’s supported me to do that.”

It started with the 1981-82 season and continued through 2002-03 before Lindsay moved into administration as assistant principal and athletic director at West.

He also stepped in and coached the freshmen team in 2006-07 and was the varsity baseball coach for some 500 games at West.

Game No. 700 was momentous but had some issues.

“It turned out to be kind of a disastrous night,” said Lindsay. “I lost two players during the game (to injuries) and one for the season. Even one of the officials asked me if anything else could go wrong that night. I said, Yeah I guess it could, but I just hope it doesn’t.”

In some ways, Lindsay’s coaching career has been much like Game No. 700, filled with joy and frustration. But that’s to be expected in a career that’s spanned over 25 seasons.

Lindsay has rolled with the punches and embraced the good times.

In 2008, he stayed retired only seven weeks. There’s no hint of burnout. His competitive fire still burns.

Even after the five-point loss to The King’s Academy, Lindsay’s Eagles, minus the two key starters, bounced back with a 64-54 district win at Hancock County. His team is 12-8 after a 70-52 loss last Friday night at Cosby, the District 2-A frontrunner.

“When I first went to West in 1981-82, we were a Class AAA school and had some really tremendous kids and good seasons,” recalled Lindsay. “I think back to Scott Childress, who I called the ‘Slim Man,’ a first-team All-KIL player. I get to see Scott all the time and his kids, and that’s what makes coaching special.”

Having such relationships and reunions with former players means a lot to Lindsay.

“We dropped down to Class AA when they opened the new Karns High, and had a pretty rough go of it,” said Lindsay. “In the eight years we were in Class AA, I think four times we had a team from our district in the state finals.”

Lindsay reflected on coaching against Clifford Ross and John Foster at Austin-East, Vernon Osborne at Alcoa, Howard Rash at Holston and Johnny Darden at Rule, and all of the great players from those powerhouse teams.

“Really, it’s been a privilege to coach against those caliber of players and teams,” he said.

West’s enrollment grew and the Rebels moved back up to Class AAA, and Lindsay recalled coaching against Bearden’s George Pitts, another one of the state’s top coaches, and once getting “a special win” over the Bulldogs’ John Johnson, a former state Player of the Year who went on to play at the University of Maryland.

Because of school renovation, West had to practice and play much of the 1991-92 season without a home gym. Practices were held off campus at the Knoxville Adult Education Center.

“We played 16 straight road games to open that season,” said Lindsay. “We went 14-2. When we moved into our new gym, we had 10 games left and we went 5-5. We didn’t know how to play in that gym. It was way too big for us and wasn’t what we were used to. But it was a great season.”

Bussell once poured in 37 points as West eliminated Oak Ridge on its home floor. In the finals, Bussell scored 41, but the Rebels lost. Lindsay still remembers one of his players, with tears in his eyes, coming up after the game and saying, “Coach, we just didn’t get the ball to Marlon enough.”

It wasn’t funny that night, but Lindsay can’t help but laugh about that comment now, and said he’ll never forget it.

“The 1999-2000 season was a special one,” continued Lindsay. “Michael Maddox – I’ll call him Dr. Maddox now – made a last second tip-in in the semifinals to beat Maryville and my old buddy Rodney Nelson 50-49.”

West followed up with a win over Sevier County to take the title.

“That was a big thrill for us to win that championship, because the school was about 50 years old and to my knowledge had never won a a district tournament championship.”

Looking back at the start of his career, Lindsay said he was like most young coaches.

“I got the basketball head coach’s job at West when I was 25 or 26 years old. You’re full of vim and vigor. You dream of all these things you want to do and stuff you want to accomplish. But the more I got into it, the more I got to appreciate just the opportunity to be there and the excitement.

“I wouldn’t trade anything for the kids I’ve coached, the people that I’ve met – from school administrators to officials. It’s been a blessing. It’s been a gift, and I just try to enjoy every game, especially now that I’m a little older.”