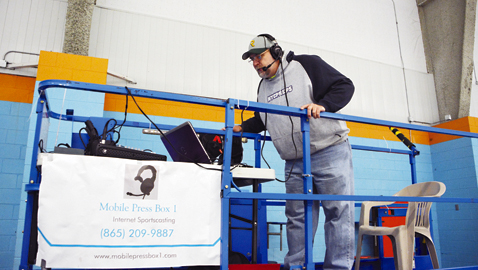 Broadcasting is a labor of love for Chuck Sebastian and he’s had a long career behind the microphone.

He’s a longtime veteran of radio and he’s seen the business change and now, he’s looking to take advantage of advances in technology.

“I started in radio in 1989,” said Sebastian, who recently moved to Knoxville after a long stint as a sports director in Wyoming. “I moved here in July to be closer to family.”

He’s no longer in terrestrial radio but he’s still in the sports broadcasting business. Upon moving to East Tennessee, Sebastian started his own business, Mobile Press Box 1, where he broadcasts sports over the internet.

Sebastian admits that it’s been a struggle thus far as he attempts to find his niche in the Knoxville market. But he recently picked up his biggest gig in Knoxville as his internet streaming network is broadcasting Knoxville Amateur Hockey Association High School games on Thursday nights at Cool Shots at the Icearium.

He’s also seeking other work with other high school programs and he’s also looking for sponsors for the hockey games.

“I’m looking for sponsors,” Sebastian said. “I’ll probably take a loss on the season but this is my passion. I love sports.”

Sebastian, a native of Toledo, Ohio, became enamored with broadcasting in 1968 when he followed the Detroit Tigers during their run to a World Series Championship. It was then that he became a fan of Ernie Harwell, Detroit’s legendary play-by-play man, who was later inducted into the Baseball Hall of Fame.

“I was a Tiger fan and I remember the 1968 World Series and my mom was a Cardinal fan,” Sebastian recalled. “I’ve heard all the legends like Al Michaels, Joe Garagiola and others.”

As a radio veteran, Sebastian has done it all. He’s been a disc jockey at weddings and for karaoke nights. He’s been a play-by-play man, a color commentator, a public address announcer and he’s played music.

He’s won awards as a sportscaster. For Sebastian, however, life is not about personal achievement.

“I like being recognized by my peers, but for me, it’s not about the accolades,” Sebastian said. “What means the most to me is when a parent or a player comes up and thanks me and tells me how much they enjoy the broadcasts.

“It’s my job to paint the picture of the game for someone who can’t be there for whatever reason. They may live far away or they may be sick but I want them to feel like they’re there.”

He’s broadcasted most sports and he loves them all.

“When there’s a microphone and sticks, balls or pucks, I’ll do it,” he said. “I want people to know that I want to cover them if they’re not being covered.”

Sebastian said that a typical broadcast costs approximately $130. He also noted that the client will get a percentage of the revenue at the end of the season.

Sebastian’s broadcasts can be heard atwww.mobilepressbox1.com. Potential clients and sponsors can reach him at (865) 209-9887 or at mobilepressbox1@gmail.com.