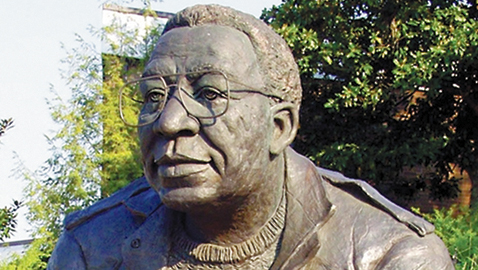 The statue of Alex Haley sits looking out over Morningside Park, taken before someone stole his glasses.

Ever been surprised by something you didn’t expect but it made you happy to find it?

So, I’m watching one of my favorite movies, “The African Queen,” and at the end I watched the credits and saw that Knoxville’s James Agee wrote the screenplay.

I thought, “Wow, I didn’t know that.” I knew Agee wound up in Hollywood and wrote for the movie studios, but that one caught me by surprise. When I Googled “Agee” I also discovered that he wrote “Night of the Hunter,” one of the scariest movies I have ever seen.

Although Agee died in New York City in 1955 and is buried on the Agee family farm in Hillsdale, New York, there just might be places in Knoxville that still recall the noted writer.

I remember that his relatives had lived in Lafollette and I’ve read a bit of his novels but I’m not that familiar with his life in Knoxville.

I found out that Knoxville has a James Agee Street and a James Agee Park along that route in Fort Sanders, near his childhood home on Highland Avenue and 15th Street. Agee drew from that childhood to write “A Death in the Family” and mentions various places including the Deaf School, which became the City Hall before the City-County Building was constructed.

After his father died when Agee was six years old, his mother remarried and Agee’s life changed a lot. Agee attended the Old Knoxville High School briefly, from 1924 to 1925. He was admitted to Harvard University in 1932 and after graduation wrote for several national magazines. During the depression he continued to write and lived with sharecroppers in Alabama where he wrote “Let Us Now Praise Famous Men.”

By the 1950s he was in California writing movie scripts. He was married several times and had several children.

“A Death in the Family” received the 1958 Pulitzer Price, three years after his death.

The oversized statue of author Alex Haley sits just off of Dandridge Avenue and overlooks Morningside Park. The statue recalls when the author of “Roots” made his home in Knoxville.

Cast in bronze, the 12-foot statue was created by sculptress Tina Allen and dedicated in 1998 during Black History Month. The little park that the statue sits in has a playground, a water fountain and green space.

What the park, or the statue, doesn’t have now is Haley’s glasses. The bronze glasses were taken last fall and no one has returned them.

“We are working with Preston Farebow to re-create the glasses. We are trying to create them in such a way that they will be more resistant to vandalism,” Joe Walsh, Director of Parks and Recreation told the Focus.

“We have been in contact with the sculpture house where Tina Allen worked. We hope to get this done by May,” he said.

Born in Ithaca, New York, the son of a World War I veteran was raised by his grandparents in Henning, Tennessee. He graduated high school early and entered college, but quit at 17 years old to join the U.S. Coast Guard.

Starting as a mess cook Haley wrote stories and became a journalist, retiring from the military in 1959.

In his later years he moved to Knoxville, bought a home near Clinton, and spent much time in our city.

Haley died in Seattle, Washington in 1992 and is buried beside his childhood home in Henning, Tennessee.