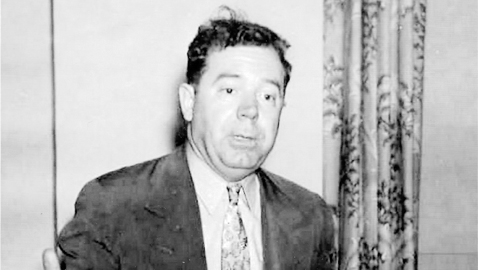 From the author’s personal collection.
Senator Huey Long of Louisiana.

Huey Long’s rise to power began with his election to the Louisiana Public Service Commission.  He ran a surprisingly strong race for the gubernatorial nomination in 1924 when only thirty years old, but lost to Henry Fuqua.  Governor Fuqua died two years into his four-year term, leaving O. H. Simpson as Louisiana’s chief executive.

The political power structure in Louisiana was comprised of a combination of political bosses and special interests, including oil and utility companies.  The New Orleans machine oftentimes held the key to gubernatorial and senatorial nominations.  The Choctaw Club was the headquarters for the New Orleans “Old Regulars”, who gathered a block from the mayor’s office in their clubhouse to smoke cigars, drink adult beverages, and discuss politics and business.  When it became apparent Huey Long would seek the Democratic nomination for governor once again in 1928, the Choctaws gathered to pick a candidate who could beat him.  They considered the incumbent, Oramel Hinckley Simpson, who had inherited the office upon the death of Henry Fuqua.  Simpson had been the long-time Secretary of the Louisiana State Senate until he was elected lieutenant governor in 1924.  Simpson was no activist as governor and evidently had something of a drinking problem.  Governor Simpson was a listless speaker and no match for the fiery Huey Long on the stump.  The Choctaws quickly discarded the notion of backing O. H. Simpson.

Another political gathering occurred in Alexandria, Louisiana where a group of power brokers included three former governors, Ruffin Pleasant, John M. Parker, and Jared Y. Sanders, as well as a contingent of the Choctaws from New Orleans.

Governor Pleasant had actually supported Huey Long in his failed 1924 campaign and had broken with his successor, John Parker, over taxes.  Sanders was perhaps the most prolific office seeker amongst the gubernatorial trio and had enjoyed a long political career in Louisiana.  Sanders had been a member of the Louisiana House of Representatives and lieutenant governor before being elected governor in 1908.  The legislature elected Sanders to the United States Senate in 1910 when Senator S. D. McEnery died in office.  Sanders turned down the appointment, as he wanted to complete his term as governor.  It was a mistake on his part, as he tried to get himself elected to the United States Senate repeatedly.  Sanders made bids for the senatorial nomination in 1912, 1920 and 1926.  When former governor Sanders had challenged Senator Edwin Broussard in 1926, the incumbent had received the unexpected aid of Huey Long.  Louisiana politics was also divided by religion; north Louisiana was heavily Baptist and protestant, while south Louisiana was heavily Catholic.  Broussard, a Catholic of French descent, was hard pressed by J. Y. Sanders and only won the nomination by a scant 3,000 votes.  Huey Long’s support had been crucial to Broussard’s victory.

Long expected both Senator Broussard and Senator Joseph E. Ransdell, whom Huey had also strongly supported in his 1924 reelection campaign, to endorse his gubernatorial bid in 1928.  The senators did provide Huey with endorsements, but they were tepid at best.  Huey would remember their faint hearted endorsements and both would pay a fearful price.

Governor Ruffin Pleasant denounced Huey at the Alexandria conference, saying, Long was “a coward with the conduct of an egg-sucking yellow dog, and a man who lies with a craven heart like a white-livered popinjay.”

Governor Pleasant was married to a very outspoken woman, Anne Ector, who would later become one of Huey Long’s loudest critics.  Huey had her arrested while Mrs. Pleasant was visiting the Capitol in Baton Rouge, ostensibly to view public records.  The former governor’s wife was highly indignant as she claimed she had been arrested on false charges and was scandalized as she had been accused of having been drunk and cursing violently.

Mrs. Pleasant would die in a bizarre accident years later, going into her darkened bathroom and mistakenly drinking a poisonous substance instead of her medicine.

The mayor of Alexandria, Lee M. Thomas, who had won the unfortunate nickname of “Wet Jug” due to his large bald head and protruding ears, pressed his own gubernatorial ambitions at the conference, but the leaders knew he was no match for Huey Long.

Their final choice was curious was in light of their reasoning to dump Governor Simpson.  They chose Fifth District Congressman Riley Joe Wilson.  Riley J. Wilson had come up through the political ranks having served as a district attorney, the Louisiana State House of Representatives, and a judge.  Like Simpson, Riley Wilson was no orator and somewhat colorless, but he hailed from north Louisiana where Huey Long was expected to run strong.  In fact, Wilson was from Huey’s own Winn Parish.

Once the Choctaws settled upon Congressman Wilson as their candidate, they may have expected Governor Simpson to drop out, but he stubbornly persisted in his candidacy.

Huey Long was not impressed and proceeded to take the hide off both of his opponents, something that was relatively new to Louisiana politics.  According to author Bill Dodd, a former lieutenant governor of Louisiana, in his book Peapatch Politics, Long told audiences Wilson was supported by “a bunch of stuffed shirts” while Governor Simpson was being promoted by “a gang of cutthroats and liars from Bourbon Street brothels and those moth-eaten aristocrats sipping their booze and branch water on rich plantations.”

One of Huey’s biographers, Richard D. White, Jr., recalls an incident where Huey Long caught Governor O. H. Simpson campaigning in Eunice at the fair and made his way to the platform.  Huey used the opportunity to profoundly embarrass the governor, who supposedly had a fondness for the racetrack.  Huey told the audience he had never been to a horse race, never bet on a horse, nor had he ever requested a single favor from the racing industry.  He then whirled around to look at a shocked Governor Simpson and demanded, “How about you?”

During the campaign, Huey Long had a memorable encounter with former governor J. Y. Sanders at the elegant New Orleans Roosevelt Hotel.  Huey was meandering through the lavish lobby when Sanders emerged from the hotel’s dining room.  As Richard White recounts in his book, Kingfish: The Reign of Huey P. Long, Sanders bellowed across the lobby that Huey was a liar.  Long charged the sixty year old former governor and punched him.  The much younger Huey then darted for the elevator, pursued by the obese Sanders, who was quite nearly out of breath.  Sanders made it to the elevator just before the doors closed and the scuffle continued.  Neither was the worse for wear, but Huey triumphantly carried the torn cuff from Sanders’ shirt for the rest of the afternoon.

Huey Long’s 1928 gubernatorial campaign set convention on its head.  Huey was the first candidate to extensively utilize radio and his 1928 effort was much better funded than his 1924 race.  Long was also better organized and made overtures to the New Orleans machine.  Huey realized he could not win statewide without making a decent showing in New Orleans.  Long managed to swallow his pride and approach some former enemies to secure their support.  As always, most of the press was quite hostile to Huey’s candidacy.  Newspaper publisher Robert Ewing, who did not personally like Huey, was an exception and his papers in various sections of the state supported Long editorially.

As his opponents charged, Huey Long never allowed the truth to stand in the way of a good story or his own political ambitions.  As recounted, by author Richard White, Huey spoke movingly of having awakened early during his childhood to hitch up the horse to the family wagon so he could take his Catholic grandparents to mass and returning home to take his Baptist grandparents to church.  When one awed supporter exclaimed he never knew Huey had a set of Catholic grandparents, Huey snapped, “Don’t be a damned fool.  We didn’t even have a horse!”

Long stressed education, as well as public building projects, in his 1928 campaign.  Huey lamented that Louisiana had the highest illiteracy rate in the country; some 22% of Louisianans were illiterate.  Long’s frenzied attacks on the utility and oil companies were popular with audiences.  Congressman Riley Wilson took the unusual stand of opposing the idea of providing free textbooks to school children as Huey proposed.  Wilson said he was against increasing taxes to pay for such things and when he ran into Huey at the Rice Carnival in Crowley, he stoutly defended the state of education in Louisiana.

When Huey heard that Wilson supporters were touting the Congressman as a poor boy and that he had gone barefoot as a boy, Long retorted, “I can go Mr. Wilson one better.  I was born barefoot.”

The Choctaws remained supremely confident as Election Day arrived.  Riley Wilson carried New Orleans, while Huey ran third once again.  They remained confident as the northern Louisiana parishes reported large majorities for Huey Long.  The Choctaws felt sure the election results from the French parishes in south Louisiana would bring Congressman Wilson victory.  They were stunned when the French parishes reported majorities for Huey Long.  Long’s strategy had worked to perfection and he won 126,842 votes statewide, while Riley Wilson trailed with 81,747 votes.  Governor O. H. Simpson was close behind Wilson with 80,326 votes.  Huey had carried six of Louisiana’s eight congressional districts.  While Huey did not win an outright majority of the votes statewide, his margin of victory was so large Congressman Wilson refused to contest the run off election.

Perhaps no political figure in the history of the United States has ever dominated the politics and government of a state as did Huey P. Long.  Betty Carter, the widow of newspaper publisher Hodding Carter, a violent opponent of Huey Long, recalled the janitor at the local school in Hammond, Louisiana had to go to Baton Rouge to be approved.  While some senators established a viable and strong personal organization inside their home states, none ever dominated just about every aspect of life as Huey Long did in Louisiana.

Even Long’s political opponents praised his vision for the State of Louisiana, but they deplored his methods.  Huey scoffed, “You sometimes fight fire with fire.  The end justifies the means.  I would do it some other way if there was time or if it wasn’t necessary to do it this way.”

When pressed, Huey snarled, “Id’ rather violate every one of the damn conventions and see my bills passed, than sit back in my office, all nice and proper, and watch ‘em die.”

Huey P. Long was never one to sit in his office, all nice and proper.

Virtually no governor of Louisiana prior to Huey Long had ever run promising to do much of anything.  Most were content to enjoy their office and allow the status quo to be as it had always been.  Huey Long intended to change things and while he oftentimes employed questionable tactics, he meant to carry out his legislative agenda.