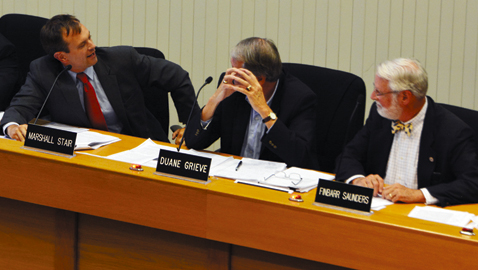 Photo by Dan Andrews.
Marshal Stair’s maneuvers at Tuesday’s City Council meeting managed to cut the proposed sign heights down considerably from what the Sign Task Force had requested. Stair is seen discussing the sign ordinance with Duane Grieve who was a proponent of taller signs.

When it gets a split vote — which is what happened during the Knoxville City Council meeting Tuesday when the new sign ordinance finally came up for discussion. After four years of work by a special Sign Task Force, numerous public hearings, and a push by the Knoxville Chamber to keep taller signs, the council passed on first reading a much more restrictive sign height rule.

While the new ordinance would not affect existing business signs inside the city unless a sign is abandoned or unless the business changes hands, the new ordinance calls for heights of 35, 30, 20 and 10 feet depending on the location of the signs. The “compromise” coming to the council had passed in a split vote by the Task Force, called for sign heights of 40, 30, 30, and 30 but was opposed by Scenic Knoxville and several other citizens.

“Signs can be helpful,” Murphy said, but added that larger pole signs erode the view. His video presentation gave Colorado Springs, Colorado, as an example of how smaller signs work better.

Malone spoke of her concerns about enforcement of the new ordinance and Feld reminded the council that more than 400 emails were sent by those people opposing taller signs.

“This issue may not be revisited for many years,” Feld, president of Scenic Knoxville, said, adding, “Knoxville has evolved to a forward-looking city and it’s time we looked like one.”

Supporters of the 40-30 change arrived at the City-County Building and wore “YES” stickers. Proponents of the 40-30 height said it would be a “40% reduction” from currently allowed heights.

John King, Mike Edwards and Gary Douglas spoke in support of the Task Force’s “higher” sign recommendation. Attorney King, speaking for the Chamber, hinted of possible litigation by saying, “Those legitimate concerns will be dealt with in subsequent action.”

Edwards, President of the Knoxville Chamber, said the organization supports the Task Force recommendation but called the 40-30 size “a major hit.”

Douglas, owner of Douglas Outdoor Media, urged better definitions of the various sign ordinances and said enforcement would be difficult.

In the end it was a parliamentary maneuver by Councilman Marshall Stair that prevailed, lowering the overall height and ending about 90 minutes of “height” debate. Stair originally moved to further restrict sign heights to 25, 25, 15 and 10 feet, but then Councilman Finbarr Saunders suggested 40, 30, 30 and 20.  Stair said he’d vote “No” on the Saunders motion so he could bring his lower sign heights back up at the meeting.

“The 40-30 foot was too bold,” Wallace said. “Yes, we have to be fair to business but the community wants to see a better sign ordinance. I have to support Stair,” he said.

Grieve said that as long as he’s on the Council amendments to the sign ordinance will be made and added, “Business folks are neighborhood folks.” He called changing the ordinance an “ongoing process.”

Councilman Nick Pavlis, in support of the 40-30 heights, said, “I’m afraid we are going to throw away the hard work of the Task Force.”

Both sides applauded the Task Force and Councilwoman Brenda Palmer said the ordinance is “always a work in progress.”

Councilman Nick Della Volpe said that citizens look to the Council to speak on their behalf and added, “The buck stops here.”

Five votes were taken on the issue with Stair amending Saunders motion to the 35-30-20-10 heights and that portion of the sign ordinance passed 6-3 with Grieve, Palmer and Pavlis voting “NO.”

The council then moved on to a lengthy session looking at other changes to the Task Force recommendations. Much of the discussion dealt with changes in wordage and the council was asked to get those changes to the law director to be considered during a second and final reading.

The marathon meeting of the Knoxville City Council had some moments of levity Tuesday evening. The meeting, mostly about changing the sign ordinance, stretched from 7 p.m. until about 10 p.m. with a lively discussion, debate, various motions and maneuvers, public comment, and occasionally confusion about what portions of the new ordinance was being considered.

City Recorder Cindy Mitchell, who is retiring, was joined by William Johnson who will replace her and was selected at the beginning of the meeting. Mitchell’s retirement was noted, and regretted, by the mayor, the council, and citizens. Several spoke of how easy it has been to work with the Recorder.

Also new to the proceedings, and introduced by Mayor Madeline Rogero, was the new Metropolitan Planning Commission Director Gerald Green. Rogero said Green, who was a planning director in North Carolina, is a University of Tennessee graduate and has moved his family to Knoxville to assume the position.

He replaces retiring MPC Director Mark Donaldson, whose years as the head of that department became contentious. Green’s first day on the job was July 1st and he joined interim director Jeff Welch at the table during the meeting.

After an hour or so of rancor by both sides in the Sign Ordinance discussion the mayor broke the meeting for five minutes. Mayor Rogero addressed both the new Recorder and MPC Director and said, kiddingly, “This is a typical meeting!”