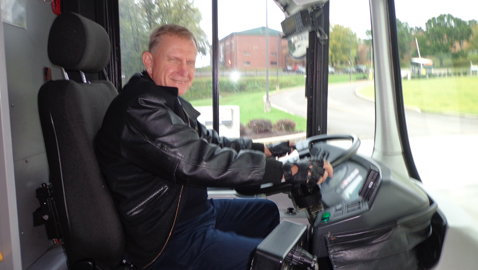 Luke Johnson, retiring after 36 years as a Knoxville bus driver, is behind the wheel last week during one of his last runs. Photo by Mike Steely.

Bus Route 42, from the downtown transit center to UT Hospital by way of Fort Sanders along Clinch Avenue, won’t be the same without longtime bus driver Luther “Luke” Johnson. His riders, many of whom he knows by name, wished him well last week as they entered and exited the bus.

After more than 36 years with the City of Knoxville, Johnson retired this month after having driven every route in town except the two new routes that were added this year.

“My first route, back in 1978, was Dandridge Avenue,” he said. He said that many interesting things have happened on and around the buses he’s driven, including being stuck out on the west end of Kingston Pike for five hours in traffic during a snow storm. He said a woman on the bus was in labor and, eventually, he got her downtown where she had the baby in a hospital.

“I have two blind people who ride the bus and I’ve promised to go walking with them when I retire,” he said.

In addition to walking daily, Johnson said he plans to read all the books he’s accumulated over the years and catch more sporting events. He’s a UT and Smokies fan and hopes to attend more games.

“Maybe when my wife retires in a year or two we may travel some,” he said. Isabell Johnson works at the UT Library and the couple have three dogs.

“We dated years before we got married,” he said, adding, “We had a telephone marriage. When I’d go home I’d call her or she’d call me!”

Johnson’s history with Knoxville transit began well before his employment there.

“We used to ride the bus when I was a little boy, over in South Knoxville on Number 4. My grandmother lived in Lonsdale at the time. I’d ride the bus downtown to the Tennessee Theater and pay 25 cents to see a movie,” he said. “I got interested in the bus then.”

He said a bus driver helped him get the job, explaining that he was working in Atlanta at the time and came back to Knoxville on vacation when he heard a position was open driving a city bus. He applied and, in 1978, began his career.

Johnson has seen a lot of changes in the buses in Knoxville. He said that the money changers were already gone on the buses when he started. He recalls when the buses were packed with passengers as maids and housekeepers headed to West Knoxville to work.

“They used to fill the buses to the hilt when I first started,” he said.

Johnson recalled that when he first started driving, the Dry Gap road was dirt and very narrow and that passing busses had to stop or slow in order to get by each other. He also recalled driving the TVA express routes which have since been discontinued.

The city carried more than 3 million fares each year and Johnson has carried many of them. On his current route, to and from several hospitals, he’s got to know a lot of people. Some rode his bus five days a week on their way for treatment.

On his last trip on Friday, October 17, he was joined by his wife, his brother, KAT employees and his regular passengers. He said the passengers had air horns which they sounded while pulling into the terminal. That Saturday he was honored with a dinner at Chop House by fellow bus drivers and was invited to the KAT meeting last Thursday to be recognized.

Aside from catching up on his reading, walking and sports, Johnson wants to get more involved with his church, Holy Ghost Catholic, and play a little golf. He said that retired driver Darrell Henry “showed me how to retire.” He said to just set a date and stick to it.

“I’ve had a great time, haven’t had much of a problem at all during my time,” he said, adding, “Knoxville is a great place to work.”