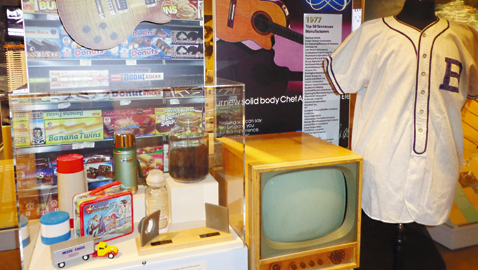 Photo by Mike Steely
A large collection of “Made in Tennessee” products are on exhibit at the Museum of East Tennessee on Gay Street downtown. The exhibit is there through February 1st and then travels around the state.

You may think of our state as mostly rural and producing mainly agriculture, beef, and country music. But the Volunteer State, and especially East Tennessee, has come of age in the 20th and 21st century to become a major manufacturing center. The Knoxville area has been a birthplace of well known brands like JFG Coffee, Sea Ray Boats, Kern’s Bread, and the Cas Walker Supermarkets.

Granted that while some of these brands have disappeared or been reborn under different manufacturers, there’s lots of Knoxville area and East Tennessee products that have “gone Nationwide.”

Did you know that Lebanon is the home of Cracker Barrel Restaurants or that Shoney’s and Captain D’s are headquartered in Nashville? Chattanooga is the birthplace of Krystal Restaurants, Retro TV, Olan Mills and The Family Channel. Memphis has Auto Zone, Fed Ex, Fred’s, Service Master and First Tennessee Bank. Athens is the home of Mayfield Dairy and Collegedale, near Chattanooga, is the home of Little Debbie snacks.

Those iconic Tennessee-founded or Tennessee-based products and companies make up a special “Made in Tennessee” display at the Museum of East Tennessee History on Gay Street. The soon-to-be traveling exhibit remains there until February 1st.

The museum staff explains that the exhibit is funded with an Alcoa Foundation grant and is made up of items from the museum’s collection and several loaned items. On display is early furniture and textiles, Krystal burgers, Moon Pies, colas, VW products, Gibson guitars, Little Debbie products, Goo Goo Cluters, Dr. Enuf soft drinks, Maxwell House Coffee, and much more.

Walking through the display brings lots of “I didn’t know that” comments.