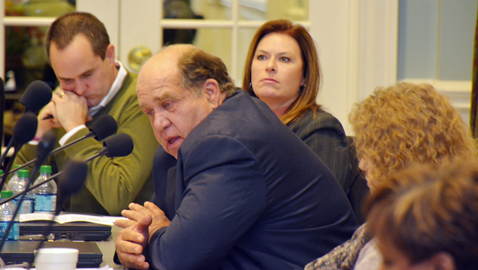 Mike McMillan, center, was the only School Board member to voted against the superintendent’s contract extension. Photo by Dan Andrews.

By Mike Steely
steelym@knoxfocus.com
By an 8-1 vote, the Knox County School Board voted last Monday to extend Superintendent James McIntyre’s contract for another year, despite objections from some teachers and parents. Forty-five speakers addressed the packed house; many county and county officials and some citizens and teachers praised the superintendent and some teachers and parents called on the elected board to either postpone a decision or vote against extending the agreement.

Indya Kincannon, who had raised many of the questions that concern teachers in previous meetings, said their mass appearance at the board meetings “has been a huge positive” but went on to say “I thank them everyone, they’re not going to like how I vote tonight.”

“(McIntyre’s) done what the Board asked him to do. We’re not where we want to be but we’ve made progress. The Board has not made it a priority to support teachers,” she said.
She said teachers are “tired and stressed and we need to do something about that. My vote is not against teachers.”

The public forum took up some four hours, with speaker after speaker taking five minutes or so to address the board. McIntyre spoke following the forum and said, “I think the teachers do a terrific job. I need to make sure the teachers feel supported.”

In the days preceding the Board of Education decision, McIntyre and Board Chairperson Lynne Fugate announced they would work to create an advisory group that would include teachers. Fugate said at the meeting the group would meet three times before the end of December but would not continue. McIntyre told a Joint Education Committee meeting the week before the Board meeting that teacher surveys were mailed and announced at the Board meeting that he would give up more than $5,000 in a cost-of-living increase to the Board to create a teacher appreciation fund.

Karen Carson said that McIntyre has done this every year, noting that this year is the first time it has become public knowledge.

Several of the Board members recognized the communication problem between the superintendent and the teachers and pointed to the advisory group as a good step, although one board member suggested that the group be made permanent instead of being active for less than one month.

Pam Trainor said the conflict has caused “the entire Board to be attacked and mentioned an internet posting that portrayed them and the superintendent as ‘Hitler and the 3rd Reich.’” She aimed a comment at fellow Board member Mike McMillan for passing on the posting, saying that she had received it, passed it to the Board but wanted the sender to her to remain unidentified.

McMillan, the only member to vote against the extension, responded by saying that if Trainor had wanted the sender to remain unidentified she should have deleted the name.
Trainor said, “My vote tonight could end my friendship with teachers. This is not just about McIntyre.” She went on to add that she had heard that there may be opponents in the election primary, a threat by opponents of the Board’s decision.

“He is listening, we’re all listening. Don’t judge us because we make a decision you don’t like,” said Board member Gloria Deathridge. “It may be a surprise to some, but I support the extension.”

“I’m impressed by the number of people who spoke on Dr. McIntyre’s behalf,” McMillan said. Noting that most of the supporters were administrative colleagues, he added, “It’s like asking the mayor’s staff to testify for him.”

“I will not vote for the extension. We’re not voting to fire Dr. McIntyre. The biggest thing now is the anxiety level of the teachers. Maybe there will be something done in the next 60 days to alleviate that,” McMillan said.

“Our job is to help guide and direct, to hire a leader to execute our plan, and we’ve done that,” said Chair Lynne Fugate. “We live in a sports town. If Butch Jones asked for an extension (and it was turned down) what does that say?”