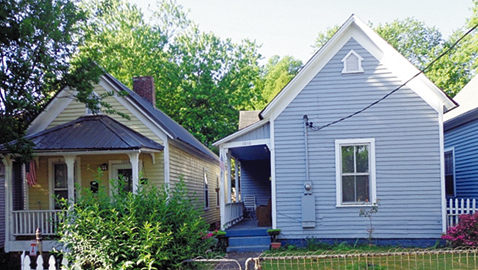 Photo by Mike Steely
Shotgun houses sit next to each other and are so named because folklore says you can stand at the front door and fire a shotgun at the back door without hitting the inside of the house. The houses sit along streets with Victorian, Queen Anne, and other historic houses.

It’s one of those neighborhoods that, at first, appears to a small village, with clusters of businesses, older large and small homes, and people outside on porches, tending flower gardens, or chatting with neighbors.

Originally known as McGhee’s Addition, Mechanicsville was so named because of all of the mechanics and workers that moved to the area after 1850. They were employees of an iron company, the various mills, and later the railroad. Because of their trade the community took on the name.

Many of the homes in the older section of the neighborhood still have the iron fences made at the iron works. Many of the new residences before and after the Civil War were Welch and some claim that Mechanicsville is the only successful Welch Colony in Tennessee.

In 1883 the neighborhood petitioned Knoxville for annexation and, reluctantly, the city took them inside city limits. By 1883 there were several stores there along with a greenhouse, high school, and several churches.

After 1900 many residents began moving further into Knox County, and later into subdivisions. The African-American population increased, drawn to jobs and less expensive houses. The neighborhood today has a mixed population and is proud of its past. Several homes and buildings there are on the National Registry of Historic Places.

The former Bradley’s Food Market, at 501 Arthur, was built in 1910 and more recently used as a restaurant, still stands among some of the nicer old homes in the neighborhood. It now houses the  Britton Art Gallery, where artist Ken Britton displays his assortment of paintings.

Several homes built just after the turn of last century exist on Western, Keaderick, Clark, McGhee and Boyd Street. Some houses in Mechanicsville  are two story Queen Anne style, some Gothic, some Victorian, and many are small “shotgun” houses.

Mechanicsville is just across Interstate 40 from downtown. A large Food City serves the area and from the neighborhood it’s an easy drive just about anywhere in Knoxville.

A walking tour of Historic Mechanicsville hosted by Adrian Gonzalez, husband of OMNI’s president Cathy Gonzalez, took The Focus around the neighborhood last Thursday. Within that part of Mechanicsville, protected by a Historic Zoning Overlay, were many houses dating from 1880 through about 1910 and some surprises. Several of the houses, built to match the neighborhood, were relatively new but you’d never know it by the carefully built exteriors.

OMNI has about 25 active members. Within the Old section are a few homes occupied by long-time residents, some homes that are rentals, and many homes that were bought and restored by more recent home owners. The Gonzalez family came from a large city and was looking for something similar in feel and chose Mechanicsville.

Here and there the walk found several of the original old iron fences. Many of the homes are painted similar to coastal homes, with different colors and trim. Some of the business buildings between the neighborhood and Western Avenue have also been restored and are in use.

Knoxville Heritage, Inc. has bestowed at least 10 awards on these restoration efforts in the historic section.  In 2004 OMNI, Rohm and Haas, East TN Foundation and many other community businesses and organizations developed green space in Old Mechanicsville, from the City of Knoxville in 1995, into a beautiful garden oasis called Olde Mechanicsville Park.

The walking tour passed by only a couple vacant lots where new, but traditional looking homes, could be built. There were two historic homes for sale. Most properties were well kept and maintained.

OMNI meets the second Thursday of each month in the Odle & Young Architects Office building on Western Avenue between Carrick and College Streets, one of the restored business buildings in Mechanicsville.

You can reach OMNI by calling Cathy Gonzalez at 673-4820 or Google “Old Mechanicsville Neighborhood Interest.”

There are two neighborhood associations in Mechanicsville, both working to preserve and protect their unique Knoxville section.

Charles H. Wright, President of the Mechanicsville Community Association (MCA), told The Focus that the group was formed in 1998 in order to rally community support in saving Maynard Elementary. He said so far they have done just that and saved local children from being bused across town to East Knoxville.

The group has been involved with traffic calming and beautification projects as well as boosting community pride.

The MCA has about 25 active members representing the African-American residents in Mechanicsville and more members who attend meetings and special events. Normally the Association meets at the Fairview Recreation Center on Dora Street, but last week they met at the Clinton Chapel to accommodate the larger crowd to hear Knoxville College’s President speak. He said the Fairview Center was once a one-room school house.

He said many people who were born in Mechanicsville return to their the area for special events and each year in September the group sponsors a Home Coming.  “We haven’t forgotten them, they are still a part of our community,” he added. He said the destruction of public housing, the creation of I-40 and I-75, and other factors displaced many long time residents.

Wedged in between the two interstates and Western Avenue Wright said there’s little room in Mechanicsville for new homes.

The MCA meets every first Tuesday of each month and the public is invited. You can contact the association at 637-1802 or Google them.

The new president of Knoxville College came “down from the hill” Tuesday to talk to the Mechanicville Community Association and seek their help in getting enrollment up and rebuilding the reputation and physical plant of the historic African-American institution.

“With the University of Tennessee why would you need Knoxville College?” President Dr. Evelyn Hallman asked the audience at Clinton Chapel Church.

She went over several points, adding that right now the teacher-student ratio is 8 students for each facility and low tuition. She said Knoxville College is changing its focus from a liberal arts college to become more career focused. Each student is on a “work program” and required to work in their first year at the college, like grounds keeping, and in their second year as community non-paid volunteers.

Juniors and seniors work outside in internships or externships. The college owns 51% of the nearby Pilot station and the filling station serves as a training ground for the upper classes.

The historic college, founded in 1875 and overlooking Mechanicsville and Knoxville, is struggling with many things, including funding and accreditation.

Dr. Hallman said that the college received a $25,000 “Retool Your School” grant last year from Home Depot and, this last week, learned it won first place and will receive $50,000.

Dr. Hallman said she realizes that the campus buildings are in bad shape and “We’re addressing that.” She said that James Chesney has been hired as director of the physical plant.

“We realize that for too long we’ve been isolated up on the hill and want to get involved with the community,” she said.

Despite the poor building conditions she said that no one ever complains about the education students receive there.

“We’re in the process (of accreditation) and making steps. It will open up federal funds and student loans,” she said.

Several of those present were Knoxville College graduates and asked Dr. Hallman several questions and made suggestions, including the idea of devoting a day or weekend to repairing buildings one floor at a time. Many said there is a need for the smaller African-American colleges.