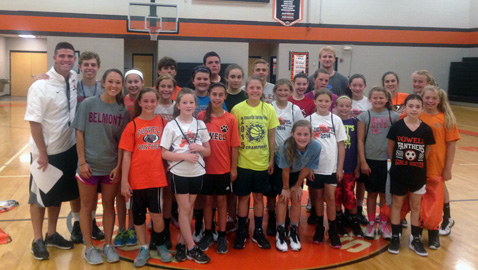 Her college playing days may be behind her but that doesn’t mean that Taylor Mills is finished with basketball — the sport that has dominated her life.

“Basketball has opened so many doors for me and it gives me a platform to share my faith,” said Mills, who was a standout for Holston Middle and Gibbs High School. “Basketball has been such a blessing for me.”

Mills first played college basketball at Kennesaw State in Georgia before transferring to Belmont University, where she recently graduated with a degree in biochemistry and molecular biology. She plans on attending optometry school.

That was an opportunity she relished and the chance came after she spoke at another girls basketball camp hosted by Farragut Middle School and Knoxville Christian School with her boyfriend Ty Greene, who was a prep star at Bearden High School, where his retired number hangs in the rafters.

“We’re thankful for these opportunities,” Mills said. “I will always coach basketball, whether it be with my kids someday, or with other kids.

“I don’t know if I would ever coach for a career but basketball will always be part of my life. It has opened so many doors for me and it has blessed me with so many relationships with teammates and coaches.”

One of those coaches is Belmont men’s basketball coach Rick Byrd, who has turned the Bruins into a perennial Ohio Valley Conference contender and mid-major powerhouse. Under Byrd’s guidance, Belmont has always made noise in the NCAA Men’s Basketball Tournament.

“Coach Byrd is one of those people that I’m talking about,” Mills said. “He’s a great Christian man and he’s outstanding. I went to Kennesaw State first and at Belmont I played for Cameron Newbauer, who has 700 wins on his record.”

“I have so many relationships because of basketball,” she said. “I met my best friends through basketball and those will be the people who are in my wedding.”

“Those people have been great,” Mills said. “Coach Bray and coach Greene let me be an extension of them on the floor and when I came home in the summer, coach Bray would always be there for me if I wanted to work out in the gym at Gibbs.

“I still help Mike Capps whenever I can.”

Mills left Knoxville after graduating from Gibbs in 2010. She left as one of the most decorated players in Lady Eagles’ history. She was an all-state performer as both a junior and a senior. She was a four-time all-District 3-AA and all-KIL standout at Gibbs and as a senior; she was the KIL’s Most Valuable Player in 2009-10.

At Belmont as a junior, she played for a Belmont team that finished second in the OVC and lost by one point to Indiana in the Women’s NIT.

As a senior, she was injured and was forced to watch her teammates from the sideline during the second half of the season.

“During my junior year, we went to the Women’s NIT and we finished second in the conference and during my senior year, we had everybody coming back and then I ruptured my intestine and missed the first month of school,” Mills said. “They said it was a freak accident but my career was over and it was tough.

“It gave me a new perspective and it showed me that I could still be involved but it was tough but I’m at peace with it.”

It was those hard times that she spoke about at Powell recently.

“The theme of the FCA camp is ‘undefeated,’” she said. “We may not go undefeated on the court. But God is always undefeated. I basically told them my story and I told them that through Jesus, we can always be undefeated.”

Mills said that her college workload and basketball commitments didn’t leave her much spare time. But she’s an avid fan of University of Tennessee athletics. She also noted that she’ll be rooting for the Golden State Warriors and Stephen Curry during the NBA Finals.

She also enjoys the atmosphere in Nashville.