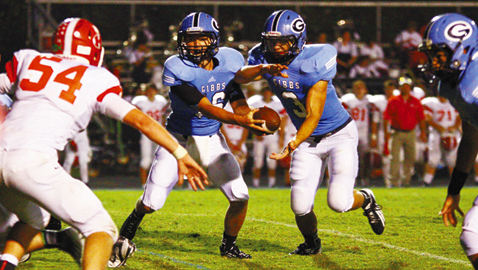 Photo by James Spears/SpearsPhoto
Gibbs junior quarterback Preston Booth hands the ball off to junior running back Silas Joiner in the Eagles’ historic win over visiting Halls Friday night. Joiner and Booth were Gibbs’ leading rushers and Booth also had a hand in all five Gibbs touchdowns in the 36-0 victory.

It was payback time in Corryton.

After years and years of being on the other end of the score, Gibbs beat Halls 36-0 in football Friday night at Ernest Whited Stadium.

It was a historic win for the Eagles, just what their coach wanted.

“We went from the lowest of lows last week at Clinton (38-19 loss) to the highest of highs,” said Gibbs Coach Brad Conley. “I know a lot of people around Knoxville probably are not going to think this is a big deal because you had a 1-3 Gibbs team and a 0-3 Halls team, but Gibbs has beaten Halls twice in 55 years, 1958 and 1991. We impressed upon our kids that it didn’t matter – the situation or the records.

“Our kids came out and had a great week of practice. I give all the credit to our kids. The coaching staff did a great job. It was just a team effort from start to finish.”

Junior quarterback Preston Booth ran for four touchdowns and threw for another to lead Gibbs, which notched its first win in three tries as a new member in District 3-AAA and is 2-3 overall.

“He did an outstanding job of running our offense,” said Conley.

“We wanted it (the win) really bad,” said Booth. “I can’t tell you how hard we practiced this week. We worked as twice as hard as we ever have. I think we were really prepared for this game.”

“Our offensive line kicked some butt tonight,” said Booth. “Without them, we couldn’t have done anything.”

Gibbs got the upper hand early when Brandon Williams and Hunter Lane teamed up to stop workhorse Garrett Moyers for no gain on third-and-one. On the first play after Halls’ punt, Silas Joiner roared around right end for a 53-yard gain to the Red Devils’ 7-yard line. Booth scored two plays later from the 3. Buck Hawkins’ first point-after-touchdown kick made it 7-0.

Joiner did not play in the Clinton game due to an upper leg injury.

“I told him before the game, ‘You’ve got to be the horse tonight, the guy we lean on’ . . . He got us rolling tonight, and he gets a lot of tough yardage inside,” said Conley.

Halls answered with three first downs and moved to the Gibbs 40, but the Eagles defense, getting minus-yardage tackles from Brandon Norton, Westen Lakins and Dallas Day, forced another punt.

Halls got the ball back at the Gibbs 37 but still couldn’t capitalize on the good field position. Spencer Herd’s fourth-and-four pass was just out of Christian Glenn’s grasp.

Back-to-back penalties foiled a Gibbs drive, but the Eagles got the ball back at the Halls 35 midway into the second quarter. Booth completed a 13-yard pass to Joiner, then scored on a 20-yard run to make it 14-0.

A running-into-punter penalty kept a Halls possession alive, but the ball was popped out of Moyers’ hands and recovered by Gibbs’ Davis.

Gibbs’ Brendon Wilson returned the second half kickoff 62 yards to the Halls 37 to set up Booth’s third TD run from the 7. The Red Devils lined up off sides on the PAT, and Conley chose to go for two. Booth converted up the middle to make it 22-0.

Colby Jones took a bubble pass from Herd 51 yards to the Gibbs 27, but the Red Devils could get no closer than the 20.

Gibbs drove 85 yards in eight plays to go up 29-0. Booth’s 42-yard pass to Wilson was the big play. Booth’s 11-yard aerial to Ethan Warden on a bootleg produced the points.

Halls went with freshman quarterback Caden Harbin the rest of the way.

Lakins stuck Moyers for a 3-yard loss on third-and-two to get the ball back and the Eagles still had another TD drive in their bag, going 55 yards in 10 plays. A 29-yard gallop by Joiner highlighted the march. Booth sneaked in from the 1 with 1:26 remaining.

“I think we’ll have a lot of momentum going into next week,” said Booth. “This win is great, but we’ve got to put it behind us after Sunday and get ready for Oak Ridge. I think we’re going to have a great season. We’re definitely not done.”

“We’ve got to quit self-destructing,” said Halls Coach J.D. Overton. “We move the ball, then we turn it over, we blow a formation . . We’re not finishing what we started.”

“We lost option responsibilities from time to time and didn’t do what we were supposed to do,” said Overton. “We didn’t play very disciplined on defense, which will hurt you against an option team like this.”

Does Harbin’s debut mean there could be an ensuing battle for the starting QB position at Halls?

“Every job we’ve got is open week to week,” answered Overton. “Who knows?

“He has a very bright future. He’s a good young kid, a very good football player. We’ll see where he goes.”