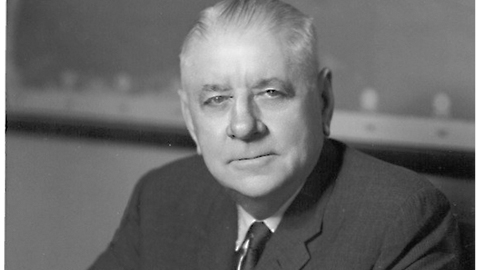 Herbert Sanford Walters was a successful businessman and by the appointment of Governor Frank Clement, United States senator from Tennessee. A reminder of Herbert Walters to many East Tennesseans is Walters State Community College.

Born November 17, 1891 in Jefferson County, Walters attended both Carson-Newman College and the University of Tennessee. UT would remain one of Herbert Walters’ prime interests for the remainder of his life and the Walters Science Life Building is named in his honor.

A more conservative Democrat, Hub Walters would go on to be closely aligned with many of Tennessee’s most prominent officeholders. Walters was quite close to Senator K. D. McKellar and Senator Tom Stewart, as well as Governors Prentice Cooper and Frank Clement. Walters would also play a part in national Democratic Party politics and was a big supporter of Texan Lyndon B. Johnson.

Herbert Walters won election to the Tennessee House of Representatives in 1932 and served only the one term before becoming Commissioner of Highways under Governor Hill McAlister. In time, Walters would become one of the most respected and powerful Democrats in Tennessee. Closely aligned with Tennessee’s senior United States senator, Kenneth D. McKellar, Walters would hold prominent positions inside the state and national Democratic Parties.

Walters headed a construction firm, Walters and Prater, which received many contracts under the New Deal administration of President Franklin D. Roosevelt. Being close to Senator McKellar, who doled out the projects in Tennessee, Walters became a wealthy man. Walters entered the banking business with the old Hamilton Bank. Walters had interests in several other businesses and proved to be a generous benefactor to many people and institutions in East Tennessee.

While Walters loved politics and was deeply involved in elections, he turned down the opportunity to run for governor more than once. Living in Morristown, Walters became an integral part of Senator McKellar’s organization, which spanned the length of Tennessee. McKellar was quite popular in East Tennessee and with the advent of the New Deal, the senator controlled most of the federal patronage for the state. Herbert “Hub” Walters became one of several Democrats in East Tennessee who made the recommendations for various jobs. Judge Thad Cox in Johnson City, former District Attorney General W. T. Kennerly in Knoxville, and “Hub” Walters in Morristown were the conduit for much of the patronage available to Senator McKellar in the First and Second Congressional districts.

Walters did duty as Chairman of Tennessee’s Democratic Party and when E. H. Crump, leader of the Shelby County machine, decided to relinquish his post as Democratic National Committeeman, it was “Hub” Walters who succeeded him.

Walters joined the McKellar – Crump alliance in the brutal 1938 primary elections to defeat Governor Gordon Browning and Senator George L. Berry. Walters helped to raise money and used whatever influence he wielded to support Prentice Cooper for governor and Tom Stewart for the United States Senate. Walters was close to Governor Cooper and Senator Stewart, but especially so to Senator McKellar.

Walters dabbled heavily in politics throughout the decade of the 1940s while continuing to prosper economically. In 1948 when Senator Tom Stewart was challenged by Chattanooga Congressman Estes Kefauver, Walters strongly backed Senator Stewart. Stewart sought reelection despite having lost the support of E. H. Crump and the Memphis machine. Prodded by Crump, Senator McKellar had endorsed Crump’s candidate, Cookeville Judge John A. Mitchell. Walters, like most of the McKellar organization simply ignored the old senator and worked hard for Tom Stewart. Kefauver, although an East Tennessean himself, was likely a bit too liberal for Mr. Hub’s taste and Walters liked Tom Stewart personally.

Walters was disappointed by Stewart’s loss to Kefauver and the senator sent Mr. Hub a letter thanking him for sticking with him to the end. Walters promptly hired Stewart to represent some of his business interests when Stewart left the Senate and returned to the practice of law. Stewart returned to Washington, D. C. on behalf of Hub Walters frequently and sometimes the two traveled together to further Mr. Hub’s business agenda. Tom Stewart approached former Senator Scott Lucas, who had been Majority Leader of the United States Senate until his defeat in 1950, about accepting employment from Herbert Walters.

When Senator K. D. McKellar insisted upon running for an unprecedented seventh term in 1952, Hub Walters remained staunchly loyal to his old friend, despite his belief McKellar could not win again. Both E. H. Crump and Hub Walters gently tried to dissuade Senator McKellar from seeking reelection, but McKellar stubbornly believed he could defeat his challenger, young Congressman Albert Gore from Tennessee’s Fourth District. Mr. Crump and Hub Walters raised money for the McKellar campaign and worked hard for the old senator, but McKellar, then eighty-three years old, lost.

Walters kept in touch with McKellar after the senator’s loss and his retirement to the Gayoso Hotel in Memphis. Walters sent the old political warrior flowers on his birthday and came to visit McKellar at his apartment, once bringing a gift of a special reclining chair designed to help with McKellar’s rheumatic legs.

Hub Walters was steadfastly loyal and never forgot his friends. That attitude and trait in turn was recognized by fellow Democrats, big and small. Walters himself had a legion of friends and was held in high esteem by most who knew him.

The 1952 election saw Senator McKellar defeated, but Hub Walters’ own influence was increased with the election of thirty-two year old Frank Clement as governor. Walters had strongly supported Clement in his 1952 campaign to unseat incumbent Gordon Browning and would remain highly influential in the Clement administrations.

In fact, Clement would come to think of Walters almost as a second father and Walters’ own opinion of the governor as the son he never had. Walters and his wife Sarah had no children, although they doted on the children of their Prater nephews.

Walters supported Clement’s Commissioner of Agriculture, Buford Ellington, in the heated 1958 gubernatorial primary. The primary field was crowded that year and Ellington only narrowly eked out a victory and having the personal and financial support of Hub Walters was crucial to Ellington’s election.

In 1962, Frank Clement was seeking a return to the governor’s mansion, a continuation of Tennessee’s “leap frog” government of Clement and Ellington. There was no question as to whom Herbert Walters would support and he threw everything he had into the campaign to return Frank Clement to the governorship.

Clement won and had been in office for only about eight months when Tennessee politics was altered by the sudden death of Senator Estes Kefauver. Kefauver had put off surgery to await the return of his wife, Nancy, and his aorta burst. It was up to Governor Frank Clement to appoint a successor to Kefauver.

Frank Clement’s choice to succeed Estes Kefauver was Herbert S. Walters. Clement’s choice of Walters sent signals the governor was interested in serving in the United States Senate himself, as Walters was then seventy-one years old and had recovered from throat cancer surgery. Still, Hub Walters was a natural choice for the distinction of serving in the United States Senate, having been considered by many as Tennessee’s “Mr. Democrat.”

The John F. Kennedy Presidential Library contains a recording of a telephone conversation between Governor Frank Clement and Herbert Walters. The conversation occurred just before Governor Clement publicly announced his appointment of Walters to succeed the late Senator Kefauver. Kennedy expressed his pleasure with Walters’ appointment and Clement put his own father, Robert, on the phone with the President, who exclaimed he understood the elder Clement to be “the power behind the throne,” just as his own father was for the Kennedy clan. President Kennedy told Senator Walters he would likely see him “the first of the week.”

Walters went off to Washington to serve alongside Tennessee’s other senator, Albert Gore. Walters, having supported Lyndon B. Johnson for president over John F. Kennedy in 1960, was still grieved by the young president’s assassination. Johnson became president just months after Walters had been appointed to the U. S. Senate and Hub Walters lent his support to Johnson’s administration, although Senator Walters refused to vote for LBJ’s civil rights legislation.

Few thought Walters would run to succeed himself in the Senate in 1964 and he supported Governor Clement’s bid to become Tennessee’s next senator. Clement lost to Congressman Ross Bass and Walters’ term in the Senate expired after Bass was certified as the winner. Walters grumbled a bit that Bass seemed to be in a big hurry to occupy his Senate seat, but he returned home to Morristown and his business and philanthropic interests.

Walters assumed the status of one of Tennessee’s elder statesmen while giving generously of the fortune he had accumulated throughout his life. He again supported Frank Clement in the governor’s last political race in 1966. Clement managed to defeat Senator Bass in the Democratic primary, but lost the general election to Republican Howard Baker.

It was a sign of the times and Walters realized Tennessee politics was changing. Many Tennessee Democrats were either leaving the party or supporting Republican candidates. Walters supported Senator Albert Gore in 1970, but Gore lost to Chattanooga Congressman Bill Brock and Tennessee had for the first time ever, two elected Republican senators.

Senator Walters, although not at all enthused about the gubernatorial candidacy of John Jay Hooker, had at least given lip service to Hooker’s bid, but Hooker lost to Republican Winfield Dunn.

Tennessee’s politics had changed considerably during Hub Walters’ lifetime. Once a one-party state, Tennessee Republicans had made their way back to being competitive. Walters was used to dealing with Republicans having lived his entire life in the First Congressional district and Walters had been close to long-time Republican Congressman Carroll Reece.

Senator Walters lived to see Howard Baker reelected to the Senate in 1972 and President Richard Nixon carried the Volunteer State in a landslide over George McGovern. It was the last campaign for Mr. Hub who passed away August 17, 1973.

Herbert S. Walters left a rich legacy for East Tennessee, being instrumental in convincing state officials to locate what ultimately became Walters State Community College in Morristown. Walters gave generously of his own money and a scholarship still exists today in his name for deserving East Tennessee students.

Hub Walters exhibited many qualities found lacking in today’s political environment; steadfast, loyal to the core, and a man of integrity, Walters was a true Tennessean.