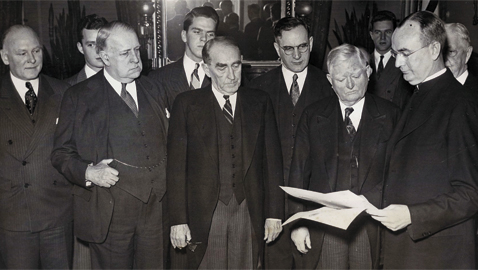 From the author’s personal collection.
(Left to right) Senator David I. Walsh of Massachusetts (with watch fob across his vest), Speaker of the House William B. Bankhead of Alabama, Congressman John W. McCormack, and Vice President John Nance Garner of Texas, 1939.

“I have no hesitancy in insisting that Government in an emergency do everything that can reasonably be done to relieve human suffering and distress.”

That was the philosophy of John William McCormack throughout his long political career and he lived by it.

John W. McCormack of Boston was an old-fashioned politico.  The first Catholic ever to be elected Speaker of the House, McCormack was a very religious man and a kindly one.  In fact, John McCormack never seemed to hold any animosity toward any political foe, much less a grudge.  McCormack watched helplessly when his favorite nephew, Edward, waged an uphill battle for a seat in the United States Senate against a thirty-year old newcomer, Edward Moore Kennedy.  The younger McCormack, who had been Attorney General of Massachusetts, had growled during a debate that Ted Kennedy’s candidacy would be “a joke” were his last name Moore.

McCormack was also devoted to his wife, Harriett, who was ten years his senior,  Without fail, the two dined together every night.  If Congressman McCormack was kept on Capitol Hill into the evening, Harriett would come to have supper with him, otherwise the Speaker would hurry home to their apartment in a Washington Hotel.  Legend has it the two never spent a night apart after having been married and when Harriett fell ill, McCormack moved into the hospital to be near his beloved wife.  When Harriett died in 1971 at age eighty-seven, the Speaker was devastated.  McCormack would live nine more years, alone.

John McCormack was a tall, rather gaunt man, but he had an engaging smile and could easily make a rip-roaring partisan speech when the need arose.  McCormack was deathly afraid of airplanes and never flew until he was forced to do so in 1961 and it was only then because he wanted to attend the funeral of his dear friend Sam Rayburn.

John William McCormack was one of twelve children born to Joseph and Ellen McCormack, both Irish immigrants who had come to America after the Great Famine in Ireland, looking for a better life.  If it was better, it was also quite hard.  Only three of the McCormack children lived to reach adulthood.  Joseph McCormack either abandoned his family or left to find work in Maine and died.  He was laid to rest in a pauper’s grave.

Young John McCormack found it necessary to leave school and work to help support his family.  He worked for $3.50 per week and attended night school to earn a law degree.  Although he never attended a single class of high school, John McCormack earned a law degree by the time he was twenty-one and passed the Bar exam.

McCormack became interested in politics at an early age.  As a teenager, he had attended rallies advocating suffrage for women with his mother.  In 1917, McCormack won his first election.  Massachusetts had called a Constitutional Convention and McCormack was elected as a delegate.  That same year, McCormack joined the Army when the United States entered World War I.  Returning home to Massachusetts in 1918, McCormack became an accomplished trial lawyer.  In 1920, he was elected to the Massachusetts House of Representatives.  Two years later, McCormack was elected to the State Senate where he remained until 1928.  It was in 1928 that Congressman James A. Gallavan died and John McCormack won the special election to succeed him.  McCormack would remain in Congress until his retirement in 1971.

John McCormack was quickly identified as both a loyal Democrat and a talented legislator.  Throughout his career as Speaker, he would help usher through the House of Representatives some of the most significant legislation ever to be approved by the Congress.  Speaker McCormack helped to pass legislation affecting Civil Rights, the G. I. Bill, Social Security and Medicare.  McCormack was a stalwart during both Franklin D. Roosevelt’s New Deal and Lyndon B. Johnson’s Great Society.  Yet, John McCormack was neither a publicity-seeker nor a flamboyant congressman.  Quite the contrary.  McCormack kept a remarkably low profile.

John McCormack had not been in Congress long before he was tapped by Speaker John Nance Garner of Texas to serve on the powerful Ways and Means Committee, a much sought after assignment in the House of Representatives.  McCormack was only in his second term and the Boston Congressman was picked to chair a special committee with investigating Nazi propaganda in the United States.  Semdley Butler, a retired general, had made the allegation that a cabal of millionaires was plotting the overthrow of the government through a military coup.  McCormack’s committee looked into the charges despite the fact much of the news media considered it little more than a hoax.  McCormack shared the responsibility for the committee along with New York Congressman Samuel Dickstein.

Dickstein is an interesting historical figure in his own right.  Very liberal, Jewish, utterly corrupt and apparently a traitor to his country, Sam Dickstein had trafficked in illegal visas for some years and was reputedly a paid spy for the SGB and the Soviet Union.  Appropriately code named “Crook” by his Soviet handler, Dickstein was the son of a rabbi and ha d a reputation in Congress for being unpredictable and a maverick.  McCormack was the polar opposite of Dickstein, calm and prudent.  Dickstein would go on to serve on the New York State Supreme Court and still sat on the high court when he died in 1965.

In 1936, a contest for Speaker of the House erupted between several contenders, including William B. Bankhead of Alabama and Sam Rayburn of Texas.  Speaker Joseph W. Byrns of Tennessee had died and John McCormack had backed Rayburn.  Sam Rayburn did not win that contest but four years later, he succeeded Bankhead.  Rayburn did not forget his friend from Massachusetts and selected McCormack to become Majority Leader of the House.

McCormack was an effective Majority Leader, which called for a partisan.  The cigar-smoking Bostonian frequently taunted Republicans for not supporting President Dwight D. Eisenhower as they should, chiding them that without help from the Democrats, the Eisenhower program would go nowhere.

William “Fishbait” Miller, who had been Doorkeeper of the U. S. House of Representatives for twenty-eight years, was forced out of office and wrote a lively “tell all” memoir, which became a best-seller when it was published.  Miller detailed many of the kindnesses of Speaker John McCormack.  Miller routinely sought donations for Baptist churches and charities from the Catholic Speaker, who always gave generously.  McCormack’s genuine kindness would be as much a hindrance to his Speakership as it was a help.

Speaker Sam Rayburn died of cancer in 1961 and John McCormack was elected to succeed him.  The previous year, McCormack had made one of the nominating speeches for John F. Kennedy at the Democratic National Convention.  It was not one of McCormack’s better efforts and there was supposedly some rivalry between the Kennedy and McCormack families, which came to a head in the 1962 Democratic primary for the U. S. Senate.  Yet McCormack gave a moving eulogy for Kennedy when the president was assassinated.

The decade of the 1960s was a time of change in the United States and John McCormack faced a host of difficulties for the House of Representatives was changing as well.  The assassination of President John F. Kennedy, the Great Society of Lyndon Johnson, the Vietnam War, and the assassination of Dr. Martin Luther King divided the country and the Congress.  Unlike Sam Rayburn, John McCormack found it exceedingly difficult to ride herd over a growing group of young Democratic congressmen who chaffed under the seniority system.  McCormack also had difficulty with many of the committee chairmen, mostly conservative Southerners, who ruled their own turf like despots.  Even Rayburn had been having trouble with many of those same committee chairmen before he died and Speaker McCormack was not the forceful and decisive personality his predecessor had been.  Still, John McCormack was a warm and friendly man and his kindly nature made it hard to oppose him.

The 1963 session of Congress was especially grueling and the House remained in session throughout the entire year.  The House finally completed its work after remaining in session all night long.

The younger Democrats in the House of Representatives kept clamoring for change throughout the tenure of John McCormack as Speaker.  Congressman Morris Udall of Arizona finally led an insurrection against the Speaker, challenging him for the Speakership when the new Congress opened in 1969.  Udall was unsuccessful and one unhappy congressman urged the members of the Democratic Caucus to embarrass McCormack with a vote of no confidence.  McCormack had had enough.

Harriett McCormack was dying and the Speaker was mentally and physically exhausted.  He surprised most everyone when he announced in 1970 that not only would he not run for Speaker again, he would retire from Congress at the end of his term.

McCormack left behind not only his own legacy from his decades in Congress, but another in a young Congressman he had helped to tutor: Thomas “Tip” O’Neill, also of Boston.  O’Neill learned much of what he knew from Speaker John McCormack.  Massachusetts had three Speakers of the House from 1947 until Tip O’Neill retired.  John McCormack and Top O’Neill were Boston Democrats, while Joseph W. Martin was a Republican.  Martin had helped to move both the Truman Doctrine and the Marshall Plan through the House, despite the fact there was significant opposition to both inside his own party.

John McCormack, while serving as Majority Leader, had helped install William Dawson, the only black Member of Congress, as chairman of a House committee.  McCormack served on that particular committee, but he used his personal powers of persuasion to keep racist Southern members from refusing to serve on the committee.  McCormack, while Speaker, had to duel with Congressman Howard W. Smith of Virginia.  “Judge” Smith chaired the House Rules Committee and as a deeply conservative congressman, had been a thorn in the side of President John F. Kennedy and LBJ.  When the historic Civil Rights Bill came to Congress, Judge Smith did all he could to delay the legislation and Speaker McCormack finally threatened to get the bill out of committee through a discharge petition, finally forcing Smith to retreat.  Speaker McCormack stood beside President Johnson when LBJ signed the bill into law; Dr. Martin Luther King stood near the Speaker as Johnson penned his name to the bill.

During his long Congressional career, there was no whiff of scandal to touch John W. McCormack, although there was a noxious stink over one of his top aides, Dr. Martin Sweig.  Sweig was indicted and tried for misuse of the Speaker’s office and impersonating McCormack on the telephone.  Sweig was acquitted of every charge, save one: perjury.  Sweig was sentenced to thirty months in prison and fined $2,000.  An apologetic Sweig served nine months of his sentence before being paroled.  Sweig had first come to McCormack’s office as a young file clerk while he attended Georgetown University.  The son of a Polish immigrant, Sweig rose to become quite powerful as the Speaker’s top aide.

After the passing of his wife and retirement from Congress, McCormack remained for a while in Washington, D. C., but finally he went home to Boston.  The former Speaker became increasing infirm and frail.  Childless, John McCormack entered a nursing home to live out the last years of his long life.  He died quietly on November 22, 1980.