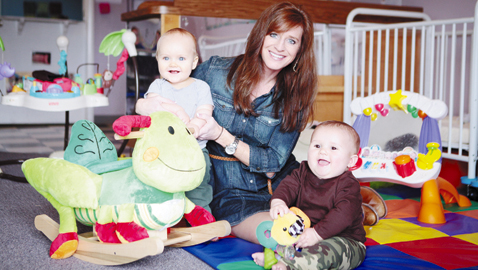 You would be really surprised at Mud Pies and Music on Clinton Highway in Powell.

The daycare is much more than just a daycare. Founded in 1994 by Kara McKamey, the building was once medical offices owned by the Oak Ridge Hospital. It now has six classrooms and cares for children from six weeks old and up and provides after school care for older children. There is one room for infants, two for toddlers, two for pre-school, and one for after school.

From 6:30 a.m. until 6 p.m., Mrs. McKamey and her staff of more than 15 employees care for 65 full enrollment children. She said many of her employees have been students at Crown College and “that’s been a very good coop for us.”  She added, “Lots of moms work here also.”

On January 4, Mud Pies and Music celebrated 20 years at the 7600 Clinton Highway location.

“We offer really good, quality care. We’re not in the business for the money; we truly care for the children. My gift is to work with children and I’ll always put the children first,” she told The Focus.

Why “Mud Pies and Music” as the name? Mrs. McKamey explains that while a childcare major at the University of Tennessee, she read a book called “Mud Pies and Magnets” and the phrasing caught her imagination.

“This is a pretty secure career, as opposed to retail. There will always be children who need quality care,” she said.

“When we got started I didn’t expect all the state regulations, and those got stricter. That’s good for children but hard for a private daycare. Some daycares went out of business but we’ve learned to adjust around it,” she said. “We’re a 3 Star facility and, under state regulations, 3 Stars is the highest score,” she said.

Special programs at the daycare include a weekly visit by a Gym Bus, a specially equipped exercise bus and “Music in Motion. “The daycare hopes to extend its afterschool and summer care this year with a camping-type event outside behind the building.  Pick ups for children after school are available from  Karns, Grace Christian, and Powell schools.

“Parents are our clients but their children are our first priority,” Mrs. McKamey said. She added that her nine-year-old daughter is showing a special interest in the daycare and hopes that someday maybe her daughter might want to take over after college.