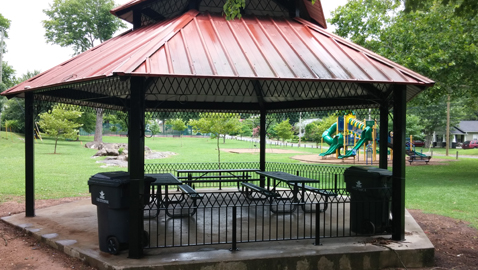 Photo by Mike Steely
The gazebo at Edgewood Park will be the site of free music, watermelon, and a neighborhood celebration Thursday. It’s free to attend.

“This is just a concept, just a review, to see if we can get some excitement,” she told the general meeting of the Parkridge Neighborhood Organizations. One of the ideas at the Abby Fields parking lot is to possibly develop a “business incubator” consisting of shipping containers to allow startup businesses to open there.

“That would be really neat for the neighborhood,” she said.

Another idea is to build a wall around the KUB substation and Fawaz said KUB has agreed to foot half the cost of the wall. She also said that developing and promoting parking behind businesses and off the streets would help the area.

The meeting, at the Cansler YMCA, also heard briefly from Patrick King of Henry and Wallace, about the future of the Standard Knitting Mills building.

Lynn Sullivan updated the neighborhood about use of a city grant to create three entrance signs and historic neighborhood signs and the organization voted to hire Per-Ole Lind, creator of the murals at the underpass on 6th Avenue, to create a sign design and possibly use the design on tee shirts for members.

Dawn Michelle Foster, Deputy Director of Redevelopment, told the group that a $496,000 contract is underway to design a concept for the Magnolia Avenue Streetscape plan for four block there, adding that the city hopes to start construction next year.

The organization voted to name Jennifer Montgomery to serve as President for the remainder of the year, replacing Jerry Caldwell who has resigned.

Calvin Chappelle is coordinating a Halloween Themed  Neighborhood Home Tour for October, and is asking for volunteers.

The Edgewood Park Neighborhood Association is inviting you to attend its third “Music in the Park” Thursday, July 16th, from 7 until 8:30 p.m. The Edgewood neighborhood is located between Central Avenue, Fairmount Boulevard, Washington Pike and Whittle Springs Road.

The event will be held at Edgewood Park, located just off North Broadway at 3109 Ocoee Trail, next to the North Knoxville Library and the Larry Cox Senior Citizens Center. The park’s two acres has picnic tables, paved trails, swings, a playground, and two tennis courts. The music will be at the gazebo there and will feature Linda Hill, one of Knoxville’s beloved singers and storytellers.

The event is free and there’s free watermelon and free face painting. You can bring the family and you might want to take a blanket or chairs.

The Edgewood neighborhood group does the event each year and the association works on things such as traffic calming, beautification, and has a neighborhood watch. The area is made up of moderately priced homes and apartments and is friendly and highly walkable with many sidewalks and mature trees. The association meets every third Tuesday at the Larry Cox Center at 7 p.m.

The Association has also been working on improvements at the Roseanne Wolf Picnic area on Fairmont.