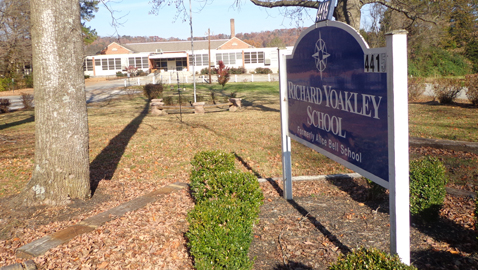 Photo by mike steely
The Richard Yoakley School in the Alice Bell neighborhood stills carries the “Formerly Alice Bell School” inscription. Many places, including the neighborhood park and Baptist Church, carry the name of the woman who contributed so much to her community.

She was a remarkable woman, years ahead of her time, and her memory lasts through the many places and things named for her in Knoxville.

Alice Bell was the daughter of Samuel Newton Bell and his wife Margery Legg. Samuel built the old Bell Home on Washington Pike in 1858. Alice was said to be a spirited young lady and attended Walnut Grover Academy where she met her future husband, John Robert Shipe.

John Shipe was a surveyor and superintendent of the Knox County Schools. Alice became involved with the community, the Red Cross, and many church activities. She donated the land for the Alice Bell School, which was named for her in 1948. The Alice Bell neighborhood, a community park at the school and the Baptist Church there carry her name yet today.

The school is now named the Richard Yoakley School and specializes in students with behavioral or other problems. The school maintains a strict dress code. Provides regular and special educational programs, vocational classes, and behavior modification for children in grades 6 through 12.  The ultimate goal of the school is to return students to schools in their zoned areas.

An active group, the Alice Bell-Springhill Neighborhood Association, is headed by Ronnie Collins.  A cell tower near Washington Pike and I-640 is a visible reminder of the impact this organization has had on the community. Thousands of drivers each day no longer see a cell tower. Instead, they view a huge flag pole.

They have also worked with Clayton Bank and are currently active with plans to improve Washington Pike and Millertown Pike. The group also has been active in the renaming of Valley View extension as “Charlie Haun Drive.”

The association meets monthly at Alice Bell Baptist Church. You can reach Collins at 637-9630.