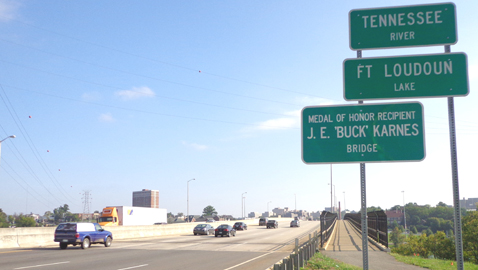 We drive over them every day, seldom really thinking about crossing a stream, river, or lake. We don’t really notice bridges until one of them is being rebuilt or repaired and we have to find another way to get to where we’re going.

When the Henley Street Bridge (more properly just the “Henley Bridge”) was being rebuilt everyone noticed, especially those businesses on the south side. The same goes with smaller spans that are being repaired or, sadly, being declared unsafe for use.

We name neighborhoods, streets, and cities. We also name bridges, usually for the community they serve and occasionally for noted people. Often the names may be a bit obscure to us but, if you notice, most major or larger bridges have been named or dedicated to someone.

Three of the bridges in our community are named for Medal of Honor winners.

James Ernest “Buck” Karnes was a Medal of Honor winner in World War I. He is one of only two so honored with that medal from Knox County, the other being Alexander “Sandy” Bonnyman, Jr.

Karnes and another soldier are credited with taking out a German machine gun site in France and capturing the enemy. By the end of the war Karnes had one more medal than Tennessee’s famed Sgt. Alvin York.

The Buck Karnes Bridge is located over the Tennessee River and was once known as the UT Farm Bridge. Most of us think of the span as the “Alcoa Highway Bridge” but, more properly and more fitting, it is the “Buck Karnes Bridge.” The bridge sign was recently updated to also read “Medal of Honor.”

This Pellissippi Parkway bridge spans the waters between Knox and Blount County. Built in 1989, the 1,700 foot bridge is named in honor of Alexander (Sonny) Bonnyman, a U.S. Marine who was killed on Tarawa Island in World War II. He received the Medal of Honor posthumously for his leadership in capturing a Japanese bunker, an assault which led to his death. Although there is a memorial marker for the soldier in Highland Memorial Gardens in Knoxville the hero is buried somewhere on the Pacific Ocean Island he helped capture.

The Interstate 75 Bridge that crosses the Tennessee River (Watts Bar Lake) in Loudon County is named in honor of Mitchell W. Stout, a Lenoir City soldier killed in 1970 in Vietnam. Stout shielded an enemy grenade with his body to protect his fellow soldiers. He’s buried in the Virtue Cemetery near Farragut.

Other bridges in Knox County are named for outstanding local citizens from the beginning of our statehood through the present day.

The Henley Bridge is named for Colonel David Henley, a Revolutionary War soldier and early settler in Knox County. He was an agent of the War Department and served both the Southwest Territory and the new state of Tennessee. Henley was born in Massachusetts and served in the Continental Army as Gen. George Washington’s intelligence officer.

He was appointed by President Washington to head up the military in what was to become Tennessee and also served as Superintendent of Indian Affairs. Tennessee’s Constitutional Convention was held at Henley’s office, which was on the corner of Gay and Church Streets in the new town of Knoxville.

Henley died while in Washington, D. C., in 1823 and is buried in the Bacon-Henley Cemetery in Monroe County.

You probably know this span as the James White Parkway bridge, but officially it is the James C. Ford Memorial Bridge. James Ford was a school teacher, superintendent of schools, and postmaster. He also served as Knox County Attorney, Chancery Court Clerk, and Knox County Election Commissioner.

Ford, while serving as school board superintendent, was instrumental in the building of Belle Morris Elementary School and died in 1923 while delivering an address at an anniversary celebration there. His grave is in the Woodlawn Cemetery. Some of his family’s land was taken for the construction of the bridge.

Built in 1983, the James C. Ford Memorial Bridge spans the Tennessee River and saw a huge increase in traffic during the Henley Bridge closure. The bridge is also known as the “South Knoxville Bridge” and crosses the river carrying the James White Parkway.

John Henry Gammon was born in Anderson County and became one of the most influential people in Knox County. He had a medical and a law degree, was physician to local coal mines and the L&N Railroad, and was assistant superintendent of Eastern State Hospital.

Dr. Gammon taught school for 13 years in surrounding counties, served for 20 years on the Knox County Board of Education, and represented Knox County in the state house and senate.

He died in 1960 and is buried in the Woodlawn Cemetery.

The bridge spans the Tennessee River along Highway 168, or Governor John Sevier Highway, and was named for Dr. Gammon in a State Senate resolution in 1996 by Senator Ben Atchley.

The J. Will Taylor Bridge

James Willis Taylor was born in Union County and taught school for several years. He became an attorney in 1902 and was elected to Congress in 1919, serving ten terms until his death in 1939. J. Will Taylor also served as Tennessee Insurance Commissioner and Chairman of the Republican Party.

He died in LaFollette and is buried in the Woodlawn Cemetery.

The J. Will Taylor Bridge goes across the Holston River on Asheville Highway just east of the I-40 interchange. This bridge is also known as the James Edward Burke Bridge.

Named for Representative Ralph K. Adcock of Strawberry Plains, the bridge crosses the river between Asheville Highway and the Strawberry Plains exit on Interstate 40. Adcock was a Republican, a farmer, and a Mason.

The McBee Bridge spans the Holston River between Mascot and Strawberry Plans. In 1930, the bridge replaced the historic McBee Ferry there, originally owned and operated by Gammon C. McBee and his family. The ferry began in 1836 and operated for almost 100 years.

The McBee Bridge may be one of the most beautiful bridges in our area; its three-arch concrete design is attractive and functional.

In 2013 Tennessee State Trooper died after his car slide off Longmire Road near Emory Road. The 25-year veteran of the state police was honored later that year by the renaming of the Longmire Bridge as the Trooper Mike Slagle Bridge. The naming and sign dedication ceremony was attended by Knox County Mayor Tim Burchett, family members, friends, and state Troopers.

Who exactly is Boyd’s Bridge named for? This bridge crosses the Holston River in east Knoxville just north of Boyd’s Island, so it is obviously named for the Boyd Family.

The Boyd family, including Steven Boyd, helped settle the area.

Dr. John Boyd was a noted family physician who lived, prior to the Civil War, in the Blount Mansion. He left that dwelling and joined the Confederate Army. Boyd returned to Knoxville after the conflict and served as secretary, treasure and president of the Knox County Medical Society and on the Board of Health. There’s a large monument to him in front of the Old Knoxville Court House.

It may not cross a river but the Max Friedman Bridge in Knoxville crosses one of the most important parts of our community, where Cumberland Avenue becomes Kingston Pike. Max Friedman was a jewelry store founder, a member of city council, school board member and a politician. Friedman emigrated from Poland in 1912 and passed away in 1966. It is said by some that Friedman came up with the term “New Deal” and gave it to President Franklyn Roosevelt.

Friedman Jewelers has several locations yet today in the Knoxville area. Max Friedman is buried in the New Jewish Cemetery (Heska Amuna Cemetery) in Knoxville.