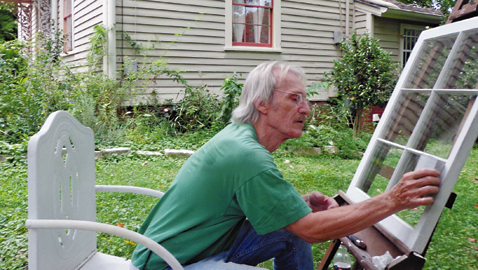 Knoxville and Knox County have been commemorating 150 years of Civil War history this year.  The Civil War spared most of the structures in Knoxville, but time and progress has covered over or destroyed important sites in our neighborhoods. Knox County, unlike many Southern cites, was spared from the war’s devastation for the most part because of strong Union sentiment among most citizens and the fact that after 1863 the area remained in Union control.

This fall the UT Archeology Research Laboratory will consult on a survey of earthen entrenchments and forts around Knoxville in an attempt to unearth some known and unknown sites. UT will use old period maps, photos, and current maps in an attempt to find the sites. Together, with ground penetrating radar, they hope to locate breastworks (trenches), cannon sites, battlefields, and possibly even unknown graves.

Unmarked graves of soldiers of both sides are still being discovered. In 1882, the remains of a tall Confederate soldier were found on a hill south of the river by men who were digging a trench. The remains were recovered and reburied in the Confederate (Bethel) Cemetery. The old Winstead House there was reportedly built atop some of Civil War graves.

More recently, ground penetrating radar indicated there may be Civil War graves on the grounds of Dr. Walter Hardy Park near Vine Middle School on Western Avenue. If so, the graves could mark the site of an early Confederate camp, Camp Van Dorn.

After capturing Knoxville, Union General Ambrose Burnside ordered many of the Union dead be buried, or reburied, in what is now the National Cemetery next to the Old Gray Cemetery.

Graves and forts are not the only notable sites from that time period; a few of the dwellings and buildings stand today and are still in use.

The Pickle House was built about 25 years after the war atop some of the breastwork that surrounded Fort Sanders.

The LMU Law School, once the School for the Deaf, was built in 1848 and served as a hospital for both sides during the war. It is located at 601 West Summit Hill Drive.

Many of our neighborhoods, like Fort Sanders, Sequoyah Hills, Farragut, South Knoxville, Downtown, Chilhowee Park and Holston Hills had Civil War camps, forts, artillery sites, and the like.

Just west of the University of Tennessee two houses stand only a few blocks apart. Both the historic old homes played a part in the Battle of Knoxville.

The Bleak House, now commonly called Confederate Memorial Hall, was built prior to the war for Robert Houston Armstrong and his wife as a wedding gift from Robert’s father. The name comes from a Dickens novel and the bricks for the house were made on site by slave labor.

During the attempt by rebels to retake Knoxville in 1863, General James Longstreet stayed there. Three sharpshooters in the tower there were killed by Union cannon fire and two of those cannon balls remain embedded in the walls. A sketch of the three slain Confederates is displayed on the walls of the tower.

The home is now owned and operated by the United Daughters of the Confederacy.

Crescent Bend, or the Armstrong-Lockett House (also known as Longview and Logueval), was built by another Armstrong family member, Drury Paine Armstrong, about 1834. It once was the center of a huge 600-acre farm. Armstrong’s granddaughter, Adelia Armstrong Lutz built Westwood, also along Kingston Pike.

Crescent Bend housed Confederate General Joseph B Kershaw during the siege of Knoxville.

The house and gardens are open to the public.