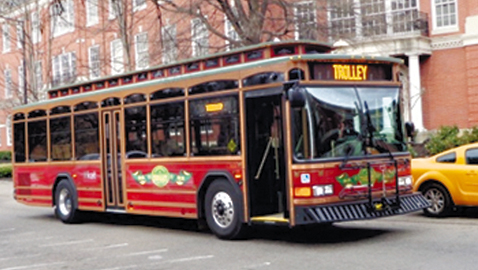 Photo by Mike Steely.
Knoxville’s downtown Trolleys are FREE and there’s one along most of the streets every few minutes. You can hop on and hop off as you wish.

If you live downtown, you probably already know the advantages of the Knoxville Trolleys. If you don’t live downtown, here’s the secret: the trolleys serve most of downtown, the Cumberland Avenue Strip, and up beyond I-40 on Gay Street at no cost to the rider. Yes, that means FREE.

Most of the trolleys come by about every 10 minutes and operate from  7 a.m. until 6 p.m. during the week

If you’re headed downtown it would be wise to find a place to park, hop aboard a Trolley and zip around for free. As an additional bonus, on the weekends all of the city garages are free, except for event days. Likewise, the trolleys do not run on holidays or UT game days. You can get a map of trolley routes at the KAT Station on Church Street or go online and print out a route map at www.katbus.com.

Three different routes are offered by the Knoxville Trolley: The Downtown Loop, the Gay Street Line, and the Vol Line.

The red Downtown Loop has hop on points at the Civil Coliseum, the East Tennessee Historic Center, Knoxville Convention Center, Krutch Park and Market Square, Regal Riviera Theater and the Tennessee Theater. It does a loop that includes the KAT Station, which might be a good place to get information about Downtown and other trolleys.

The purple Gay Street Line serves West Fifth Street north of Magnolia south to Crown Plaza Hotel, Mast General Store, Krutch Park, the Bijou Theater and the Andrew Johnson Building. It then runs along North Hill Avenue to Blount Mansion and on to the Marriott Hotel. The Old City is served by an extension of the Gay Street Trolley along Jackson Avenue.

The Vol Line services the University of Tennessee Strip on Cumberland Avenue and along Eleventh Street to Clinch Street and up Clinch to Gay, then down Gay one block and turns on West Church past the Civic Coliseum and loops back to the KAT Station.

The city is making plans to extend the Vol Line to the new shopping center being built at University Commons and it is expected to be a popular route, linking downtown residents with the new Walmart and Publix stores there. The addition to the route would use current Vol Line routes through downtown, serving the Transit Station, Krutch Park and the Convention Center. The trolley will turn from Cumberland Avenue and travel through the UT campus along Volunteer Boulevard and will provide direct service to the shopping center using the new bridge from Joe Johnson Drive.

The Knoxville Area Transit approved the additional route in their June 26 meeting and the new route is to begin July 28.

The Knoxville Trolley began in 1876 and the first trolleys were pulled by horses and mules. By 1890 electricity became the energy for new trolleys.

By 1910 there was some 42 miles of trolley (or street car) lines in Knoxville and some 11 million passengers each year. By 1947 the street cars gave way to gasoline powered trolleys and, in 2003, the system was converted to propane power.

Remains of the old electric trolley system area are still  being discovered beneath the streets downtown because, with progress, some tracks were simply paved over rather than removed.