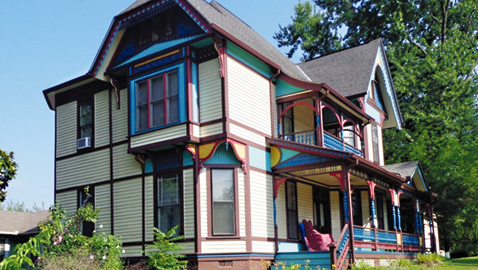 Photos by Mike Steely
The George Barber home at 1635 Washington Avenue is just one of more than 35 of his designs still standing in Knoxville. Barber’s catalogs of homes made him successful and today there are Barber homes across the nation and in at least five foreign countries.

Parkridge is a historic neighborhood roughly bounded by Hall of Fame Drive, I-40, Cherry Street and Magnolia Avenue. It’s a large, multiracial area of older homes and includes the largest number of George Barber designed homes anywhere. Barber was an early Knoxville architect who had the ingenious idea of developing a catalog featuring home designs and selling those blueprints to people who ordered them.

The neighborhood has that “city” or urban feel about it as it is so close to downtown. The lots are small and many built of the homes there were built in the 1920s. The design of the homes is diverse including some 17 Barber houses of an estimated 35 Barber homes throughout Knoxville.

The neighborhood has about 3,500 residents and is represented by the Parkridge Community Organization (PCO) which meets the first Tuesday of each month at 6:30 at Cansler Family YMCA. The group’s next meeting is August 4th and they will look at updating their bylaws. The bylaw proposals are being updated by Zachary J. Smith.

Jerry Caldwell, President of the Parkridge Community Organization, lives at 1702 Washington Avenue in a Barber home.

“It’s affordable, near the city. We have all incomes of people in our mixed neighborhood,” he told The Focus. “We’re really happy with the community and the folks that are here.”

Caldwell and the neighborhood are interested in gardening and beautification, planting trees and looking forward to the maturing of those trees, many of them fruit bearing, over the next years. He points to projects like the Magnolia Corridor to boost the area over the next 20 years.

“I’d like to attract international residents along Magnolia, with businesses like microbreweries. He said the closeness to downtown is a plus and would like to see a connection between Parkridge and Old Town.

“We’re trying to reduce blight in the neighborhood,” he said, and added that he’s pleased with the city and the police department’s attention to Parkridge but would like to see the Parks and Recreation Department show more interest.

Caldwell said he’s interested in the First Creek Greenway project and how it will serve Parkridge. He mentioned the theme of this year’s  “Home Tours” will be “The 1920’s and Prohibition.”

One of the projects Parkridge took part in last year, along with the Community Design Center, was creating the mural beneath the Interstate 40 overpass. The effort also included murals for Knoxville, Old North and the Fourth and Gill neighborhoods.

Caldwell and can be reached at 329-9943 or pirate99@gmail.com for more information about the Parkridge Community Organization.

FROM PARK CITY TO PARK RIDGE

Parkridge was developed as a streetcar-served community for professionals working downtown. The neighborhood was once part of a large farm owned by the son of Knoxville founder James White. Joseph Mabry bought the farm and in the 1850s it was developed by John Shields.

Fernando Beaman bought more than 1,000 acres, including what is now Chilhowee Park, and created a lake and dance pavilion. Park Avenue was built to connect the town with the park and later became Magnolia Avenue.

The Edgewood Land Company began developing Parkridge in the 1890s. One of the partners in the company was George Barber. Much of Parkridge was part of “Park City” which was incorporated twice as a city before being annexed by Knoxville.

The thriving neighborhood, designed for professional business people, became a working class area as the earlier home owners moved to the suburbs. Recent years have seen many of the older homes renovated and modernized inside while the exteriors have been saved and preserved.

The Parkridge Neighborhood is home to the Knoxville Municipal Stadium (formerly Bill Meyer Stadium), Caswell Park, Cansler Family YMCA, and the John T. O’Conner Senior Center. Parkridge residents are proud of their historic community and strive to keep it clean and progressing, while preserving the historic homes and buildings.

The Knoxville area has more than its share of smart and inventive men and women, with people like George Dempster, Peter Kern, Patricia Neal, Mary Costa and many others. One of the people to find a new way to survive and thrive has got to be George Barber and the Barber family.

The DeKalb, Illinois native predates Wright and moved to Knoxville in 1888 presumably for a better climate and his health. The self-taught genius not only designed homes, but published a catalog of blueprints one could buy to have their own house built. Homes were built from Barber’s blueprints around our nation and beyond.

Barber was one of the first in the nation to publish a catalog of his home designs;  his first catalog was called the “Cottage Souvenir” and featured more than 59 home designs plus tips to home builders. While Barber’s company didn’t supply the materials to build the homes, local suppliers and builders were sometimes recommended.

In 1895 Barber teamed up with Thomas Kluttz and published a magazine, American Homes, which featured the firm’s latest homes and history of architecture. The next year Barber moved to the former French and Roberts Building on Gay Street, which Barber had designed, and the growing company occupied an entire floor. The magazine moved to New York but Barber continued to contribute to it.

Other buildings based on Barber’s designs include Bartlett Hall at Maryville College, the Mechanics National Bank Building at 612 Gay Street, Tyson Alumni House at UT, the former Park City High School, and the Raper building on Court Square in Lexington, Ky. You can get an idea of the scope of his designs on line at http://en.wikipedia.org/wiki/List_of_George_Franklin_Barber_works.

Many of the homes he designed in Knoxville stand yet today, including the first home he designed for himself at 1635 Washington Avenue. Today the stately home is owned and occupied by Ray and Georgia Phillippi.

Barber stopped his catalog business in 1908 after having sold more than 20,000 home plans.  His growing firm concentrated on projects in the Knoxville area. He died in 1915 and is buried in the Greenwood Cemetery on Tazewell Pike. Many of his catalogs and plans are housed on the third floor in the McClung Collection of the East Tennessee History Center.

The Barber family continued his legacy in architecture with the efforts of his son Charles Irving Barber, who teamed with college friend Benjamin McMurry to form Barber & McMurry. The pair designed many churches, schools and buildings in our area. Many of those buildings are also on the National Register.

Charles Barber lived until 1962 and designed many homes, especially in West Knoxville, along with the Great Smoky Mountains National Park headquarters. He also designed the Candoro Marble building in Vestal, which is a good example of Charles’ training in the Beaux Arts style.

The firm, which is known today as BarberMcMurry, has also designed the East Tennessee History Center, the John Duncan Federal Building, LeConte Medical Center and the UT Music Center.

Kelly L. Headden, senior vice-president of BarbarMcMurry told The Focus that Charles Barber gained a lot of architectural knowledge while traveling on his father’s business.

“We’re growing, have some 30 employees, and moved back downtown about a year ago to the Arnstein Building on Market. Mostly we do commercial and a few residential,” he said, adding that they build many types of buildings including hospitals and churches.

Of George Barber, Headen said, “We have a great deal in our archives related to his works. I understand that at one time there was a (Barber) home in each of the 50 states,” he said.