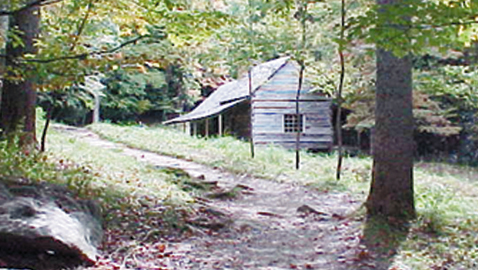 It is rare that any structure from the early settlement of Knox County still stands today. A few have, such as the Blount Mansion and the Nicholas Gibbs home, but many of the original homes have disappeared with the passage of time. Sometimes an effort is made by individuals or organizations to save and maintain the original structures and the James White home is a prime example.

Knoxville founder James White was a Revolutionary War veteran who came to the area from North Carolina when what is now East Tennessee was still part of that state. He obtained a land grant of 1,000 acres and built a 2-story log home that was located on what is now the corner of State and Clinch Avenues. White built a few outbuildings at the corners of his home site and enclosed it all with an 8-foot high stockade. History notes that it was to keep his farm animals inside the walls but, in 1780, the Chickamauga Cherokee War was still raging and the walls may have been for protection.

As the area grew he divided his land into homesites and, in 1791, established a town named for George Washington’s Secretary of War, Henry Knox. Sixty-four lots were created within a 16-block area. That year the governor of the Southwest Territory, William Blount, selected Knoxville as territorial capitol.

Two years later he moved from Fort White to another residence and, years later, the original log home was owned by James Kennedy, Jr. In 1906 that home was about to be demolished when a local citizen, Isaiah Ford, bought it, carefully marked each log, disassembled it, and rebuilt it on Woodlawn Pike.

The City Association of Women’s Clubs started a campaign in 1959 to save the home and established the James White Fort Association. They found the current Hill Avenue site and, in 1973, the home and a reconstruction of the palisades and other structures, was opened to the public. The City Association of Women’s Clubs led the way in preserving important structures and the effort continues yet today.

This year James White Fort was named by USA Today as one of Knoxville’s Top Ten Attractions and last year the fort received the Pauly Award from the Greater Knoxville Hospitality Association as Knoxville’s top Attraction or Museum.

Sam Maynard is the director at White’s Fort. You can reach the fort by calling 525-6514 or find it on the internet at www.jameswhitesfort.org.

The old Knox Courthouse that you see today at the corner of Main and Gay Streets is actually the 4th courthouse built in Knoxville. It sits atop a knoll that originally housed the Federal Barracks, a fort completed before statehood to protect the area. The current building, constructed in 1885, served as the courthouse until 1979 when the City-County Building was built. The building has been undergoing renovation recently and is 2.5-stories high with a large clock tower. Much of the interior of the old building has been changed. Wings were added to the east and west in 1919.

The historic courthouse still contains county offices, including the office of the County Clerk, and is administered by the Public Building Authority. In 1979 there were plans to demolish it but efforts led by then Knox County executive Dwight Kessel saved the structure.

Knox Heritage, established in 1974, works to preserve important structures and sites and annually announced its “Fragile 15 List” of endangered historic places. The heritage group is now housed in the historic Westwood Mansion, built in 1890, at 3425 Kingston Pike.

The East Tennessee Preservation Alliance is a union of Knox and all the surrounding counties to preserve historic sites. Staff and technical support is from Knox Heritage and funding is from a large grant. The group prepares its own “Fragile 15 List” that includes places like the former Tennessee Military Institute in Sweetwater and the Roper Tavern in Dandridge.

The Aslan Foundation is active in preserving historic lands and property and last year opened the historic Fort Higley Civil War Site. The foundation is located at 4800 Kingston Pike.

Legacy Parks Foundation was founded in 2005 to preserve open spaces and provide recreational activities and natural beauty. It is active in connecting the area greenways, securing and protecting our historic sites, and maintaining and cleaning up our waterways. Legacy Parks has also been active in locating and preserving our Civil War Sites and working to establish a trail between three of the forts.

Among historic structures currently being renovated and preserved are the Old Knoxville High School, which is becoming Senior Living Apartments; and the Moses School in Mechanicsville which will also become Senior Apartments. The former Star Sales building on Broadway is being renovated to become the headquarters for J. H. Daniels Clothing. The storefronts along the “Happy Holler” section of Broadway have also been restored and various buildings downtown have and are becoming urban apartments.

The Christenberry Home on Kingston Pike has apparently been saved through the efforts of the nearby neighborhood associations.

Minvilla Manor, now apartments for the city’s homeless, was originally row houses and later a motel. Condemned by the city in 2002 the restored project is operated by the Volunteer Ministry Center.

Fire Hall # 5, on Arthur Street in Mechanicsville, was built in 1909 for house horse-drawn fire equipment and has been preserved and continues to serve as an active fire station.

The Nicholas Gibbs House, on Emory Road, survived the years and is a noted landmark in North Knox County.

The old Knoxville City Hall, used until 1980 by the city, has also been the home of the Tennessee School for the Deaf and now houses Lincoln Memorial University School of Law.

Other structures that have been saved and re-purposed include the Miller Building, the Birdwell and Sterchi Building, The Greystone Mansion, and many others.