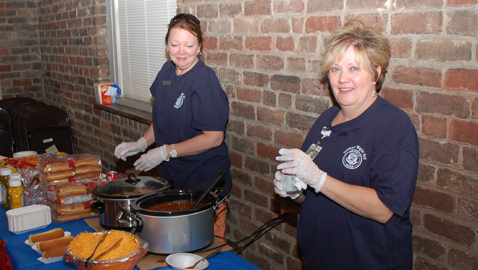 Tomorrow the Inskip area joins many other Knox County neighborhoods to celebrate Knoxville’s Night Out. The community will meet and greet its neighbors at the Inskip Baptist Church on Rowan Road with the hopes of not only deterring crime but also with the idea of getting people involved with preserving, cleaning and promoting the north Knoxville area.

Betty Jo Mahan, president of the Inskip Community Association, met with other members last week and began planning their event. The association will set up tables and chairs in the front lawn of the church and offer a chili potluck meal with the hopes of visiting with other residents.

The Knoxville Police Department is promoting the Night Out around the city as a message to everyone that neighborhoods are organized and fighting crime. Originally held the first week of August, the annual event was moved to October because of its cooler weather and so that more people can participate.

All across America, the Night Out takes many forms. Some neighborhoods encourage simply leaving your porch light on, while others hold block parties, community events, cookouts, parades, visiting police and emergency personally, marches, exhibits, etc.

Lonsdale celebrates the night with a one-mile community walk around the Lonsdale Loop. The celebration runs from 5 until 7 p.m. and will be held at the Lonsdale Community Center at 2700 Stonewall Street and is sponsored by Habitat for Humanity. There will be hot dogs, snacks and door prizes.

Greenwood Heights will have a cookout.

Mechanicsville will have hot dogs from 6 until 8 p.m. at the Danny Mayfield Park.

Moss Creek Villas will serve pizza at the Common Ground on Boones Creek Lane at 6 p.m.

OMNI and the United Way will have a hot dog supper at 1301 Hanna Avenue at 6 p.m.

Wesley Neighbors will have a gathering with snacks at the corner of Sheffield Drive and Hastings Road from 6 until 8 p.m.

Norwood Neighborhood and New Hope Presbyterian Church will have a pot luck dinner from 5 until 8 p.m. at the church at 1710 Merchants Drive.

Westavia Woods will have a block party from 6 until 9 p.m. at the corner of Westavia and Stagecoach Trail.

Eyes on the Meadows and Adair Gardens invites their residents to turn porch lights on during the evening.

Green Hills North West will have a cookout, games and music from 5:30 until 7 p.m. at 1930 Natchez Avenue in front of the learning center.

Old North Knoxville will have a Hot Dog and Chili gathering at the park on Oklahoma Avenue from 5 until 8 p.m.

Silver Leaf Homeowners will have a pot luck dinner from 6 until 7 p.m. at 931 Anniversary Lane.

South Haven and Sevier Heights will have a chili cook out from 5:30 until 7:30.

Spring Hill Villa Home Owners Association will have pizza, deserts and drinks from 6:30 until 9 p.m. at Spring Park Road near the mailbox area.

Silver Leaf Home Owners Association will have a pot luck dinner at 931 Anniversary Lane from 6 until 8 p.m.

Laurel Place Condos will have Chili with Hot Dogs from 5:30 until 8 p.m. at the cul-de-sac.

Tatewood will gather from 6 p.m. until 9 p.m. at the corner of Ridgewood and Oak.

Edgewood Park Neighborhood Association will have cookies, snacks, tea and lemonade from 6 until 7 p.m. at the gazebo at Edgewood Park on the corner of Edgewood and Acker.