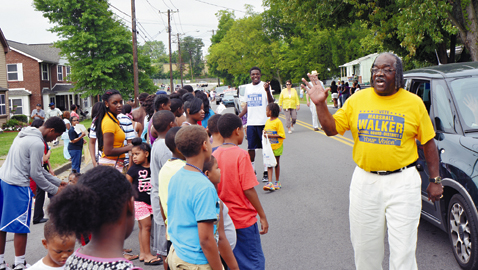 The neighborhood of Lonsdale has been hopping recently. A prime example of the hustle and bustle would be Saturday, July 27, when the neighborhood was alive with activity.

On this day, First Calvary Baptist Church celebrated its 111 years of history with a homecoming, the Lonsdale Park hosted a Community Market featuring Hispanic foods and crafts, and the Lonsdale Loop was officially opened.

My stroll through Lonsdale this day began at a playground across from First Calvary Baptist Church, where a future movie star was enjoying the inflatable slide.

Albert Harris, III, is the 3-year-old son of Albert Harris and Quiyana Nelson. His grandmother, Erica Kyle, was watching the child play and described her grandson’s appearance in the TVONE drama “Fatal Attraction” which aired recently . Albert, an active and bright child, played the son of an NBA Basketball Player and  Albert’s character was witness to a murder.

Albert was having a great time playing as members of the First Calvary Baptist Church gathered for their celebration.

A sign at the playfield proclaimed the new Lonsdale Loop in English on one side and Spanish on the other. The Loop is a one-mile path that connects Lonsdale Elementary, Lonsdale Park, and Sam E. Hill School as well as several playgrounds which were full that sunny day. The walk is intermittently marked with “L-Loop” logos which were painted by community members and elementary school children. The Lonsdale Loop is the product of a joint effort of the Knox County Health Department and the neighborhood organizations.

Just down the Loop at the Lonsdale Park, hundreds of people were gathered for the official Loop Opening, as well as the first Community Market. The four-hour celebration included children’s activities and lots of fellowship in addition to the Hispanic food and crafts.

Steve Ritter heads Lonsdale United For Change. “The Lonsdale Community Center was renovated about a year ago and provides a community room for our meetings,” Ritter said of his United For Change group.  He mentioned that the market was organized as a way of getting people of all different cultures in the neighborhood acquainted with one another.

“Lonsdale may be the most diverse community in Knoxville,” he said. Ritter said he moved to Lonsdale 23 years ago and loves living in the diverse area. He said the diversity may have guided his children into social work and health care.

“We have all kinds of people in Lonsdale,” he said, “including some new African (families) who were fleeing violence in their country.”

Rosie Noriega is Chairperson of the Latino Task Force, a group of volunteers who meet monthly in Lonsdale and co-organizers of the Market. Noriega is active in the Hispanic Chamber of Commerce and the Centro Hispano de East Tennessee, works with city officials, including the police, health department, and the labor board.

“We are slowly getting the Hispanic community to participate. When the Lonsdale United for Change talked about having a festival and opening the Loop we wanted to get the Hispanic community involved,” she said.  Noriega said they hope to have the Lonsdale Market at the park every month and are looking into offering a food safety class for those that want to take part.

Reverend Todd Stewart, Pastor of Missions at Grace Baptist Church, said Lonsdale was a mission for the church. Stewart said the neighborhood is unlike a foreign mission as, “We don’t have to go to them, they come to us.”

“We do mentoring in Lonsdale Elementary and are involved with Food For Kids in Knox County, not only in Lonsdale, but also at Amherst and Inskip.”

“We’ve been here five years and take part in ‘Adopt A Block’ with 20-30 homes we visit on each block. When we find things that need fixing we do it. The volunteers in blue shirts help renovate homes, mow grass, and we’re trying to help people find affordable, clean housing,” he said.

He said they help people without question, knowing that some residents are leery. “If you’re undocumented and need help, who are you going to tell?” he asked.

The 28th Annual Lonsdale Homecoming was held recently on the grounds of the Sam E. Hill School.

The Lonsdale Homecoming Committee, a group of current and former residents, organized the event. Highlights included live entertainment and an open mic along with a parade, opening ceremonies, and games, music, food vendors, crafts and clothing. An Old-timers Luncheon followed with an afternoon of gospel music.

Lonsdale was incorporated as its own city in 1907, only to be annexed by Knoxville ten years later. Developed in the late 1800s, the neighborhood is roughly bordered by Sharp’s Ridge to the north, Second Creek to the east and Mechanicsville to the south. If you think of the area between I-75 and Western Avenue, you’re thinking of Lonsdale.

The neighborhood was originally part of a large farm owned by William Ragsdale. The name came about as a combination of his mother’s maiden name and part of his father’s name (Lonas and Ragsdale).

Many of the streets in Lonsdale are named for Civil War commanders.

The depression era hurt Lonsdale badly and for a while bootlegging and crime was a problem that lasted several years in the area.

In the late 1990s, the efforts of several organizations began focusing on restoration of plighted properties, restoring public parks and improving the public housing there. Today many companies have located in the neighborhood, including SYSCO’s Food Service Distribution Center.

Lonsdale Park and Lonsdale Recreation Center are located on Stonewall Street and Connecticut Avenue, a few blocks off Western Avenue. Renovated in 2007 the large park has three playgrounds, a public shelter (where the Lonsdale Market is held), the new Lonsdale Loop, and basketball courts.

The Sam E. Hill Park, at 1725 Delaware Avenue, has a softball and baseball field, open space and a gazebo. The two-acre park also has a playground and the Sam E. Hill Pre-School.