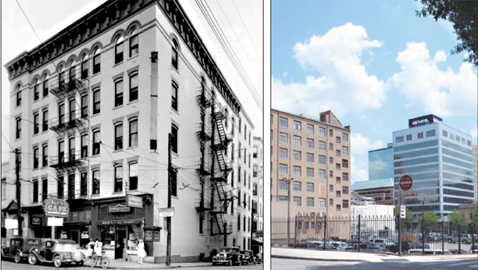 The Sprankle building at the corner of Walnut and Union in downtown Knoxville, before and after. (Photos courtesy of Whitney Manahan)

What’s missing from this picture?

So many of our landmarks have disappeared over the years. There’s a Joni Mitchell song that says “pave paradise, put up a parking lot” and that is what has happened to many of the iconic buildings in Knoxville.

Two University of Tennessee graduate students have created an interesting and useful presentation that focuses on what used to be and what is now in downtown Knoxville. They went around the city taking photos of parking lots and then researched to see what occupied the sites in past years.

“Lost Knoxville” is the result: a presentation and internet site (lostknox.tumblr.com) that pictures the buildings that had graced modern day parking lots. The students, Jared Wilkins of Knoxville and Whitney Manahan of Bristol, shared the photos and lots of information on the former buildings with the Historic Zoning Commission recently.

The reaction by the historic preservationist was immediate, telling the students the presentation needs to be made to the city council and county commission.

“Every parking lot downtown was once a building,” Manahan said.

The students have created an app for telephones that allows a walking tour of the former building sites.

“There’s not really a parking problem downtown, “she said, noting the number of parking lots on a couple maps they included in the presentation, asking “Why have we not built anything to fill the gaps?”

“We started LostKnox as part of a seminar class with a visiting professor from LA, Larry Scarpa. He proposed an interactive, design-built project in which we would create a visual installation in downtown Knoxville that would provide some sort of service for the community,” Manahan told The Focus.

“Jared and I decided to work within the realm of educating the public on Knoxville’s history. This was based on previous research I had done for work (Dewhirst Properties) utilizing the Calvin M. McClung Collection at the East Tennessee Historic Society, “she said.

She had seen photos of many buildings that no longer existed downtown.

“We were required to pick a site but as we continued to research we realized that every parking lot in downtown was once a building. We knew the project would be bigger than one installation at one site, so we created a blog with an interactive map to cover a greater amount of information,” she said.

The two students also created plexi-glass info plaques and installed those on city street signs next to the surface parking lots, showing passers by an image of the historic building that once stood where the lot is now located. The plaques carry the ironic tagline “You Are Here.”

“We finished the project for class in May and were asked to present the project to Pecha Kucha Knoxville in August,” she said. Pecha Kucha Night is a presentation of 20 slides for 20 seconds each with a live narration. The works are Japanese for “chit chat” and the public presentations have caught on and are held at various places around town. Ashley Pace with PKN Knoxville told The Focus that the next event will be at the Relix Variety Theater in Happy Hollow on November 11.

The presentations have been giving some attention to presenters..

“We were immediately contacted by various groups asking us to present again including Knoxville’s Historic Rezoning Commission and the Knox Heritage Board. There has been continuing interest by many parties and we hope LostKnox will continue to help the preservation efforts,” she said.

The students also created density diagrams comparing 1935 to 2014. She said that even knowing the number of lost buildings they had seen during the project the density diagrams were “still quite shocking to us.”

The Historic Zoning Commission discussed the possibility of having the presentation made to both the county commission and the city council.