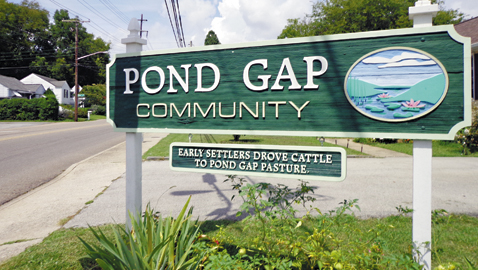 Each week The Focus has been looking at various neighborhoods in Knoxville and Knox County or the organizations, structures, or people who have made our community what it is today. If you have an idea for a neighborhood story you can email me.

Wedged between the Marble City, Bearden and Middlebrook neighborhoods, Pond Gap sometimes get neglected but not for being silent.

David Williams, President of the Pond Gap Area Neighborhood Association, has won some battles with the city and lost some. Williams lives just behind the Coop Café at the corner of Sutherland and Hollywood. His grandfather’s house is next door to the café and the Williams family has lived there for many generations. He’s a Pond Gap resident who hasn’t left his neighborhood and seems devoted to the preservation and history of his community.

The neighborhood association is working to preserve what they can and is working to put signs up for those places that have been lost to change or neglect.

Pond Gap is named for a natural pond just across the hill on Hollywood, formerly known as Pond Gap Road. The once larger pond can hardly be seen from the busy street because of overgrowing trees, bushes and weeds. Williams has been trying to get the owner to deed the pond to the association.

At one time the pond was the only nearby water source for cattle and farmers in the area would drive their stock there to water.

Just north of the pond is Pond Gap Elementary, which has been promised improvements year after year and is again on the Knox County School System’s long range plans. The school is much like Inskip Elementary with overcrowded trailer classrooms to house the growing number of students.

County Commissioner Jeff Ownby said the school is on the 2016 Capital Plan, for the second time, awaiting an addition, “unless it is pulled off.”

“They were promised two years ago and funds approved, but after approval it was pulled away from Pond Gap and diverted for a wish list project at Pellissippi State in Strawberry Plains,” Ownby said. The commissioner launched an inquiry into the misuse of physical plant funds by the school board and that report is due to be release later in September.

A week ago David Williams spoke at some length with The Focus as we traveled around the neighborhood to take a look at some of the signage developed and positioned by the association.

He said the association has several goals: Preserve history, control growth, and stop any further apartments on Sutherland.

“When Haslam was mayor he had four or five neighborhoods members for lunch with him,” he said, adding that some officials he’s talked with have no idea where Pond Gap is located.

Williams said that they are talking about applying the neighborhood for the National Registry of Historic Places, much like Happy Holler was designated recently.

The University of Tennessee RecSports Complex was built in 1994 in Pond Gap and features Aquatics, intramural sports, outdoor recreation, a sports complex and much more. Members must have an affiliation with UT to join and that includes retirees.

The huge complex replaced the UT married housing apartments there, some 50 buildings, and now also offers multi-purpose fields, softball fields, a pavilion, administration buildings, restrooms and a maintenance building. The complex and other buildings such as the National Guard Armory, sit atop what was once the Knoxville Airport, renamed McGhee-Tyson, and moved to the current Blount County location. Williams has a large collection of memorabilia of the airport and other events there including the Barnum-Bailey Circus.

The entrance to the Third Creek Greenway is at the western end of the UT complex, a popular walking trail that connects to the Bearden and Sequoyah Hills Greenway. Pond Gap residents have complained about automobiles and UT service trucks using the greenway to reach the sports complex, putting walkers and biker riders at risk.