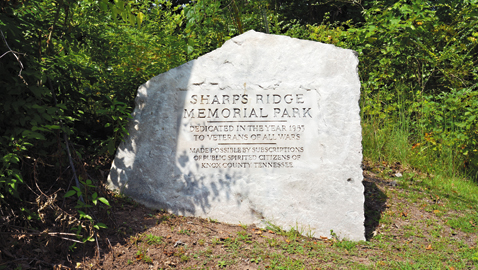 Bet you didn’t know that probably the best view of Knoxville and the Smoky Mountains is from an often forgotten city park high above the city.

Almost anywhere you live in central Knox County you can look north or south and see part of Sharp’s Ridge. It’s actually about 7 miles long, cut twice by First and Second Creek. Sharp’s Ridge extends from Western Avenue (Oak Ridge Highway) to Mill Road between Washington Pike and Millertown Pike. McAnnaly Ridge is more or less an extension of Sharp’s Ridge and runs from the end of Sharp’s to the Grainger County line.

The 111-acre park has several unpaved walking trails and is maintained by the city. It is quite the popular place for bird watchers, especially the Knoxville Ornithological Society. The park offers a couple of covered picnic areas at the summit and several places to pull off the narrow road.

The entry to the park is just off Broadway (south of I-640), onto Ludlow Avenue and then right onto the Sharp’s Ridge Memorial Road. The park is on both sides and eventually you’ll come to the end of the road at the Comcast tower.

All along you road you’ll see signs about using the park and about police observation there. There are rules prohibiting alcohol, firearms, open fires, motorized vehicles off the roads, horseback riding, etc. One of the oddest is “No hitting golf balls anywhere in the park.” Also, animals must be on a leash and “you must be respectful of others.” The park is open dawn until dusk, unless otherwise posted.

The Appalachian Mountain Bike Club is currently building trails on the south side of Sharp’s Ridge in connection with Legacy Parks. Luke Grieve is a member of the club and says there has always been old trails there that are open to hikers and mountain bikers, but “We are adding to that.”

“Currently there is about 3 miles of trail on the south side with more to come and we have permission to build on the north side of the ridge as well,” Grieve told The Focus.

“Having 8 to 10 miles of trails on the ridge will help to change the park’s usage and perception and make it an outdoor destination,” he said.

Immediately south of Sharp’s Ridge is the large neighborhood of Oakwood-Lincoln Park. The neighborhood stretches from the ridge down to Woodland Avenue and is bounded on the east by Broadway and to the west by I-275. It is an older but active neighborhood, and the neighborhood association was formed in 1979 to deal with traffic, lack of city services and crime.

The developing neighborhood became a street-car community and was annexed into Knoxville in 1917. Trolleys served the many homes that developed there. The streets have sidewalks and its location near downtown made it an ideal place for workers to live. The neighborhood is the location of several churches, the Christenberry School, Fulton High School, Steven’s Mortuary, Fountain Lanes, Physicians Regional Medical Center and AYSO Soccer Region 275.

A recent boost to Oakwood and Lincoln Park was the sale of the old Oakwood Elementary School to Family Pride Corporation. Today the large school, which closed in 1995, is being renovated to become an assisted living facility. Located at 916 Shamrock Avenue, the large building will add new residents to the historic neighborhood as it becomes the Oakwood Senior Living facility, which will focus on assisted living and memory care.

Family Pride has renovated many old schools and other buildings to repurpose them. The corporation is also working to do the same to the Old Knoxville High School further downtown.

The Oakwood facility should house up to 62 senior citizens and employ about 30 health care workers.

The Oakwood-Lincoln Park Neighborhood Association is headed by Bill Hutton and meets the third Thursday every month in the Neighborhood Club House behind the Christenberry Elementary School at 916 Shamrock. The Club House was built in 1939, and Hutton said says the association is looking for ways to use it more for the benefit of the neighborhood

The association is active in protecting and preserving the area and annually promotes its Neighbors Night Out at the Christenberry Ball Field.

New and younger board members are joining the association and bringing more to the table for discussion at meetings.

Hutton said they are in talks with Emerald Youth Foundation about projects and may possibly partner on some house rehab projects as the number of vacant houses in the neighborhood has increased over the years.

Another project for the future might include painting a mural where the back of a building is exposed after an old business was demolished at the corner of Woodland and Central.

You can reach the Oakwood-Lincoln Park Association at 219-3584 or at olp_clubhouse@yahoo.com.