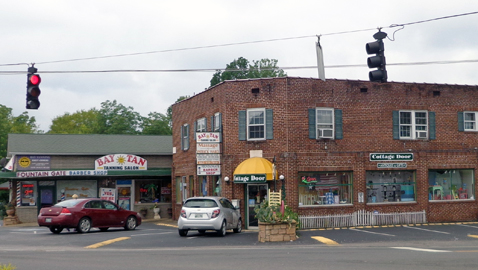 Photos by Mike Steely
The corner of Tazewell Pike and Jacksboro Pike is home to several businesses.

Sometimes the combination of chance and family connections bring about the creation of homes and commerce in a particular area.

Smithwood is one such place.

Don’t know where Smithwood is?

If you know Fountain City, then you know Smithwood. Basically that early community began at the intersection of Old Tazewell Pike and Jacksboro Pike around 1829 with the Phillip Smith cabin.

In 1839 John Smith built the first brick home in the area near old Fort Adair, near where Adair Street now meets Broadway.

But the history of the Smith family there goes back much earlier.

About 1780 John Adair, an Irish immigrant, was appointed by the governor of North Carolina to build a fort to supply and equip militia forces against the Chickamauga Cherokee and to escort travelers heading west. Adair had located to what is now Fountain City from Sullivan County and, repairing for the Battle of Kings Mountain, supplied John Sevier’s forces with funds, arms and ammunition.

Adair was probably the first settler in Fountain City. He and his wife had children and one of their grandchildren was John Smith. His two-story brick home, the first in brick home in the area, was demolished in 1960.

In 1845 Smith donated some of his land and the Smithwood Baptist Church was established. In the 1880s an outbreak of Yellow Fever added graves to the growing Smithwood Cemetery at the church.

A community grew at the intersection of Jacksboro Pike and Tazewell Pike and became known as Smithwood. Also in the 1880s, the first general store was built there. In 1915 the Smithwood School was built. The school eventually was divided into two sections and, in the 1980s the single floor section of the school was sold to the Tennessee Institute of Electronics, which became Fountainhead College.

In the 1800s Tazewell and Jacksboro Pike were toll roads. Today, the two Knoxville streets have become a busy crossroads, with businesses like convenience stores, restaurants, gyms, a barber shop and such.

Pratt’s Country Store may be the best known business in the area nowadays, located on the corner of the intersection. While Fountain City may be the address, many people continue to refer to Smithwood as more than just a crossroads or neighborhood.

The citizens of Beverly Acres take care to keep their neighborhood clean and beautiful. Beverly Acres is located between Tazewell Pike and the top of Black Oak Ridge, near the far end of Shannondale Road. The main entrance is at Malibu Drive where a neatly kept traffic island and neighborhood sign greets residents and visitors.

Last week the grassy island was being mowed and kept up by resident Ben Jaco, who said the city donated the flowers but he and others maintain it.

Once a part of the Truan Dairy Farm, the subdivision’s land was originally owned by a Swiss-French family that settled there. Beverly Acres was developed beginning in 1964 by Ralph Brooks and originally only had a dozen or so houses. Today there are about 120 homes and very few undeveloped lots.

Lined by well-kept lawns and lots of trees Beverly Acres is beautiful and has a “homey” atmosphere that welcomes everyone and is included as part of the Dogwood Trails. Many of the residents are original homeowners and the rolling hills are ideal for runners and walkers.

Almost all of the homeowners in this subdivision are members of the Beverly Acres Citizens Association, which meets quarterly at the home of the president, John Gregory. The Association holds annual dinner meetings, a summer ice cream social, and a Christmas Open House.