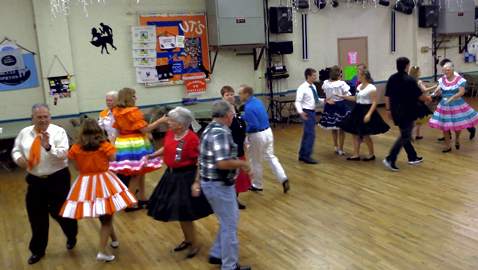 Our Neighborhoods is a weekly feature that focuses on Knox County’s communities — not only physical locations but its various residents and their varied interests. Clubs and organizations in our area suit just about every interest, even square dancing.

If you ever experienced square dancing in school or 4-H as a youth, you’d be surprised at square dancing today. The traditional calls are still there, with some added, and the four couples in each group still square off. Beyond that, the advanced dance clubs are radically different than what you remember.

The popularity of square and round dancing is on an upswing in Knox County and East Tennessee. The recent 40th State Square Dancing Convention in Gatlinburg drew clubs from across the state.

What’s the difference in square dancing and round dancing? In round dancing, the caller is called the “cuer” and calls the steps the dancers take as they move counter-clockwise in a circle. Round dancing can include the waltz, rumba, etc.

Square dancing, in most forms, has four couples forming a square, facing each other, as the caller provides direction. Even within these constraints, square dancing has found a way to evolve, as The Focus found last Monday.

The Grand Squares danced to 45-rpm records of traditional country music on the ground level of the Knoxville Square Dance Center. Caller Bill Fox sat on the low stage and led the crowd in the standard “do-si-do” and “promenade” cadence while his wife, Janice, had members check in and circulated in the crowd.

“I don’t dance anymore,” Fox said, adding that he had a hip replaced. He calls the dances for the Grand Squares and the Volunteer Travelers square dance clubs.

“Square dancing is not just for old fogeys. Anyone ages 8 to 85 are welcome, including singles, teenagers, couples and families,” Janice Fox told The Focus. She describes traditional square dancing as “friendship set to music.”

The Grand Squares dress in what you might expect for square dancing: western-style shirts and frilly skirts and petticoats. Upstairs it’s totally different, but that’s later in this story.

Among the middle-aged and older adults were eight teenagers from Carter High School. They are regular members of the club and sported the traditional clothing along with some awards they have received.

Adam Young, Bradley Walker and Zoe Emert from Carter took a break between dances and chatted about their dancing.

“At first I thought I would hate it,” Young said. The Carter High junior said his grandmother, Margaret Carpenter, encouraged him attend the dance.

“Just try it one time,” Mrs. Carpenter had told him.

“I thought it would be boring but I tried it and liked it and you get to know nice people and interact with people of all ages,” Young said.

Young soon encouraged his fellow schoolmates to try it and now the eight high school students are hooked.

“How would you do upstairs?” he was asked.

“We could probably handle it,” he said.

What separated the Grand Squares downstairs and the Double K Squares upstairs was more than a flight of stairs. You immediately hear the difference on the climb up the stairs.

Steve Kopman selected a track from his computer and the Double K Squares, in jeans, tee shirts, slacks and shorts, began following his calls to the tune of “Moves Like Jagger.” The calls followed the aggressive beat of the song and Kopman moved the dancers through quick turns, swings and moves. The club, made up of dancers with several years of experience, is classified as “advanced.”

As the first dance began Ray and Sinda Daugherty sat it out and talked with The Focus.

Ray and Sinda Daugherty said that there are seven Square Dance divisions across the state and that both clubs, upstairs and down, are members of the Area 3 Council of East Tennessee (CET). The association publishes a newsletter to its many members with club information, where and when dances will be held, contact information and details on each club. There are some 16 area dance clubs that meet in Knoxville, Lenoir City, Oak Ridge, Maryville, Greenback, Clinton, Morristown, and Harriman which belong to CET.

The beat picks up on the second floor and Ray Daugherty explains that the “advanced” dancers are dancing to what is now called “Modern Western Square Dancing.” He said he and Sinda started square dancing in 2003 when they became bored with “regular” dancing and are now members of the Little Squares group out of Lenoir City and often dance up to five nights a week.

“Little Squares has about 125 members, the rest of the clubs have 20 to 75 members,” Sinda said. She said that the state convention in Gatlinburg recently hosted more than 900 dancers and callers and included dances Thursday through Saturday during the event.

“We can dance across the state, we have friends in Memphis, Chattanooga, etc.” she told The Focus.

Traveling for the dance is nothing new for square dancers; dancing with the Double K Squares that night was a couple that drives from Corbin, Kentucky every Monday and even a couple from Florida who came up for the Gatlinburg event and stayed over to dance with the Knoxville club. One lady said she had “square danced last week in Denmark” and has done so also in Germany, New Zealand and Hawaii.

Sinda talked about the different types of square dancing from Appalachian to Western Styles and added that the “advanced” clubs have even danced to songs by Lady GaGa. Sinda joked that some call the advanced club dances “music mission impossible.”

Steve Kopman had certainly led his dancers through this “music mission impossible” with a set list of various pop and rock songs. Kopman has been calling since he was 6 or 7 years old. His father was a square dance caller and Kopman still uses many of his father’s traditional calls with the modern music.

Downstairs caller Bill Fox told The Focus he would be sticking with the traditional country music.

According to information supplied by Janice Fox, square dancing in America has its roots in England, France, Scotland and Ireland.  As pioneer families moved into Appalachia and further west, they took their dances with them. The Appalachian Mountain region dance was unique to the Scots-Irish settlers and the dance was often called a “Barn Dance.”

It was Henry Ford who popularized the traditional Square Dance after visiting an inn in Massachusetts. Ford became so interested, he bought the inn, hired the caller and established a program teaching squares and rounds. He built a dancehall in his Greenfield Village and he and the caller wrote a book on the dance.

In the 1950s, square dancing caught on and people began to write more and more dances and eventually vinyl records took the place of live music. As the popularity spread, especially into youth organizations like the 4-H Clubs, various clubs began forming throughout the nation.

The Knoxville Squares may be one of the oldest clubs in Tennessee. The club began in the 1950s and eventually divided into four groups, collectively known as the Knoxville Square Dance Association. The club danced 42 years in the Jassamine Street Center until the city‘s renovation claimed the building.

The club moved to its current location at 828 Tulip Avenue. They rebuilt the second floor and named it the “Jeanette Morrison Pratt Floor” in honor of a Knoxville Square member. The Knoxville Squares meet each Tuesday at 7 p.m. and will be starting classes Tuesday, August 26. R.G. Pratt is president. A free dance party is planned for August 19 for students 10 to 25 years of age to learn Western Square Dance at the Tulip Avenue Dance Center. You can reach Mr. Pratt at 947-3238

The Volunteer Squares are already underway with classes and, on August 22, will have an Ice Cream Social with Bill Fox calling. Guests are urged to bring their own ice cream topping.  The club dances every Thursday at 7 p.m. The contact for information is Tammy Berry at 679-2603

The Grand Squares will have their annual Labor Day Barbeque on September 1. They meet at the Tulip Avenue building every Monday night with lessons from 7 until 8 p.m., followed by the dance. The contact for the club is Barbara Benson at 406-5442.

The Double K Squares meet every Monday at the Tulip Avenue building and feature some of the most advanced and challenging dancing. The contacts are Dave and Bobbie Sponsel at 988-6847.

The Coffey Grinders meet on the first and third Wednesday each month at the Tulip Avenue building and the caller is Charlie Coffey. The contact is Jon Fortune at 691-7737.

The Tip Toppers meet every Thursday at the Tulip Avenue facility and the contact is Kathy Kelly at 719-5500. The caller is Allen Tipton.

The Country Squares meet in the Claxton Community Center and the caller is Bob Tonkin. The contact is Jean Hiser at 272-3077.

Other square dance clubs in the Knoxville area include The Three Rivers Ramblers in Harriman, The Secret City Squares in Oak Ridge, The Wagon Wheelers of Alcoa, The Denim and Diamonds in Clinton, The Lakeway Twirlers in Morristown, The Grandview Twirlers in Grandview, and The Little T Squares in Lenoir City.

Round Dance Clubs in the area include The Grand Rounds and Roundelays of Knoxville, both of which meet at the Tulip Avenue building.