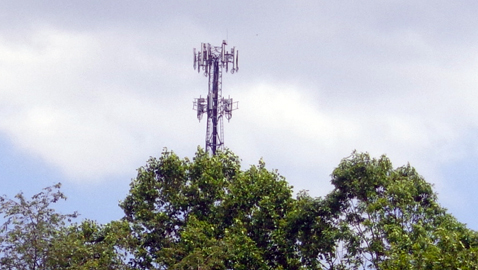 Photo by Mike Steely
Can you go anywhere in Knox County without seeing a cell tower in the distance? This one is located in the Corryton area, rising high above the Clapp’s Chapel Cemetery.

Suppose you live in a nice neighborhood and you learn a cell tower is being planned there, right smack in the middle of homes and on a high point where it would be very visible. What would you do?

Such is the dilemma now facing two Knox County neighborhoods. Although they are across town from each other, both share concerns about how a cell phone tower would affect property values, traffic and the general appearance of their neighborhoods.

The neighborhoods of Lakemoor Hills and, across town, Martha Berry are both facing proposed cell towers in the midst of homes there.

A third neighborhood, Sequoyah Hills, is concerned about the proposed Lakemoor tower because it would be directly across the lake from their homes and very visible.

Lakemoor Hills has been called “Sequoyah South” because the upscale neighborhood faces Sequoyah Hills and the Cherokee Country Club just across the lake. The neighborhood sits on a peninsula that you reach from Alcoa Highway by either Mont Lake Drive or Maloney Road and residents there like the location. Part of that area is in the city and part is in the county.

“We call it the quiet side of the river,” said John Haynes, secretary of the Lakemoor Home Owners Association. He’s one of the founders of the association and one of the opponents to a cell tower proposed there. The association’s president is Dick Graf, vice-president is Rosanne Wilkerson, and Bill Stoess is treasurer.

Support is growing against the 190-foot T-Mobile tower and recently members of the Lakemoor and Sequoyah Hills neighborhoods met with an attorney for the cell tower company. The tower would be unlit and the company is proposing a “balloon test” there so residents can see the height of the tower.

Lakemoor Hills residents love the scenery and lake frontage there and sacrifice convenient shopping and eating locations to live there. They don’t mind the drive out of the neighborhood onto Alcoa Highway and often dine at restaurants at the airport or head downtown or to West Knoxville.

“It is obvious the overwhelming sentiment of the neighbors is against the tower,” Haynes.

The neighborhood association meets at the Lake Hills Presbyterian Church and the area is on the Dogwood Trail. You can contact the neighborhood at “Lakemoorhillshoa.org” or “No Cell Tower in Lakemoor Hills” on Facebook.

Across town the residents of the Martha Berry and Ridgecrest neighborhoods are facing the placement of a 150-foot monopole telecommunications tower at 2119 Ridgecrest Drive, south of Martha Berry Drive and east of Hollyhock Lane, in close proximity of many homes there.

Also on the Dogwood Trail the neighborhood is located atop the ridge northwest of Gresham Middle School. In the valley to the north are Rifle Range Road and Dry Gap Road. Carrera Romanini has a petition against the tower and Ron Gordon is involved in the opposition to the structure.

“We live in a beautiful and established area,” the online petition reads “A cell phone tower will mar the beauty and character of the neighborhood and decrease its desirability for residents and homebuyers alike.”

Many elder residents in the neighborhood live on fixed incomes and opponents of the towers are concerned about a decrease in property values. Homes to the north of Martha Berry are among the highest elevation in the city and have fantastic views. The proposed tower is only 168 feet from the nearest property.

Opponents say the tower would increase commercial traffic there on what now only carries light residential traffic and would be a threat to wildlife through the destruction of trees and ground disturbance. Gordon recently posted lots of information on the internet about possible explosion of towers, the health hazards, and information about what other jurisdictions and neighborhoods have done to stop the construction of towers.

The question may go before the Metropolitan Planning Commission on June 11  after being postponed once and residents are being urged to voice their opposition by attending the meeting or by contacting the planning commission.

The builder, Branch Towers, proposes an 8-foot security fence on the 5.7-acre site and the tower would initially have four telecommunication antennas. A 16-foot wide paved road would be built to access the tower. If approved by the planning commission for the R-1 (Residential) neighborhood the matter would then go before City Council for approval or denial.

The Top of the Ridge Neighborhood Watch is involved with the effort to stop the tower. Suzanne Matheny of 1710 Ridgecrest is the contact for the group. You can also find the neighborhood on Facebook and sign the petition.