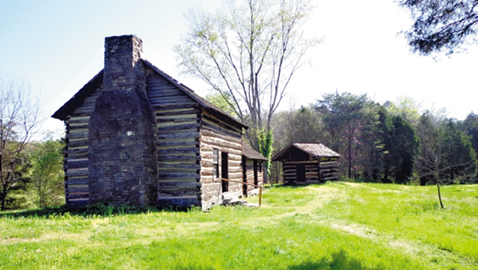 Why are Knox County and East Tennessee so “Sevier?”

You’d think the person that these Sevier places are named for must have signed the Declaration of Independence or something.

History buffs and native East Tennesseans know it is the “or something” that generates so many inclusions in place, street, and neighborhood names. Much like George Washington was “the father of our country,” John Sevier was, with some debate, the father of Tennessee.

Like many early patriots and settlers, Sevier wasn’t born here; he was born in the Shenandoah Valley of Virginia and arrived in what is now East Tennessee as a young man. He and his first wife, Sara Hawkins, married in Virginia and eventually settled at Marble Springs, the historic site located just off Gov. John Sevier Highway in South Knoxville. While it is commonly believed that  Sevier received the property as part of a land grant there are recent indications that the home cabin located there was built by a later landowner.

John Sevier served in just about every capacity that was available at the time: Military commander, governor of the short-lived State of Franklin, representative of the Southwest Territory in North Carolina, four times Governor of the new state of Tennessee, to name a few.

You’d think that a man as popular as John Sevier might one day aspire to be president of the United States but his eventual clash with his one-time friend, Andrew Jackson, prevented him politically from anything higher than election to Congress, where he served four terms.

The Sevier family was large as John Sevier was married twice and he had many brothers and sisters. The Sevier descendants stretch from Tennessee to Oklahoma (one of his sons married a Cherokee woman and moved west with the tribe) and across the nation.

You’ll find “Sevier” neighborhoods and communities in Utah and Arkansas, but the Sevier River in Utah is actually named for a miss use of the Spanish word for “Severe.”

Marble Springs, just off Governor John Sevier Highway near Chapman Highway, is more properly the last surviving home of Sevier. Named for the two springs on the 350-acre farm, Sevier and his family lived there from 1801 until 1815.

The Marble Springs State Historic Site is funded under an agreement with the Tennessee Department of Environment and Conservation, the Tennessee Historic commission and funds raised by the Governor John Sevier Memorial Association. It is also supported by Knox County and the Arts and Heritage Fund.

Several historic structures are located there, one thought as possibly being the Sevier family’s two-story home. These include a Loom House, Smoke House, Spring House, Tavern, and the John Sevier Cabin and attached kitchen. There may be some doubt that the “John Sevier Cabin” was actually built or occupied by Sevier, but to most people it will always represent his home.

How could John Sevier possibly be connected to a modern, successful Knoxville company that recently announced plans to hire 200? How could our area’s founding father, who had nothing to do with the company that builds “green” locomotive parts, be linked with it today?

At the headquarters is the “foundation” of their connection with John Sevier.

The home, on the National Registration of Historic Places, was begun in about 1790 and was completed about 1812. The beautiful house has been owned by many people over the years including its namesake John Park, an Irish immigrant who was twice Knoxville’s mayor

Back in 1790 John Sevier owned the property and built the foundation to a home but stopped construction when he ran out of money. He moved on to the Marble Springs farm and sold the lot to his son, George Washington Sevier, who turned around and sold it to a South Carolina merchant. A few years later John Park bought the property.

So, today, the headquarters of KLM sits atop a foundation built by John Sevier. The basement section is now called the John Sevier Room.

While the historic Blount Mansion may claim to be the oldest existing house in Knoxville, it’s possible that the James Park home has the oldest foundation.