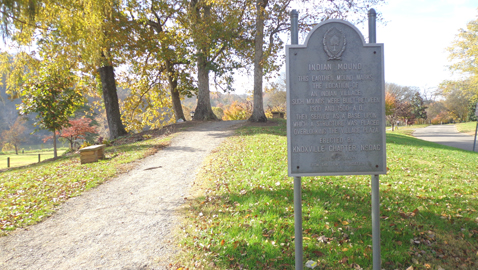 Photo by Mike Steely.
The “Indian” mound along Cherokee Drive pre-dates the Cherokee and once overlooked a village. Today the street passes on both sides of the mound and joggers run over the top of the old earthen structure.

Over the past several months The Focus has looked at current and past neighborhoods around Knox County, those early settlers who helped build our area, and the names of bridges, highways, streets, and other things that contributed to our past, present and future.

This week we look at what was here before or during early settlement. Native Americans inhabited our county for thousands of years before white settlement. By the time of early European and Colonial visitors most of the Native Americans had abandoned the Knox County and upper East Tennessee and were residing in the Overhill Villages along the Little Tennessee (Tellico Lake) or further south in the Chattanooga area and Northern Georgia.

But, before that, the Cherokee and Shawnee fought over control of our region with the Cherokee prevailing and claiming large portions of East Tennessee and the surrounding states. By the mid 1700’s our area, along with the Cumberland Plateau, were basically hunting grounds that saw some seasonal occupation by the tribe.

But the Cherokee were apparently not native to this section of our nation and were preceded by earlier Native Americans who lived throughout East Tennessee in villages. Many of the sites included what we now call “Indian Mounds” which then had council houses atop and burials below. Today, while some estimates suggest more than 200 mounds were in Knox County, less than a dozen remain.

There are other Native American sites within our county borders, including Cherokee Caverns on Oak Ridge Highway (Western Avenue) where remains have been found. There are also known Cherokee War sites, like Cavett Station where the Chickamauga Cherokee attacked and massacred the settlers there. Dr. James Faulkner has written a book about Cavett (or Cavitt) Station that details the attack and also attempts to locate the actual site of the pioneer fortified cabin.

The Cherokee often visited Knoxville for treaty talks with the territorial and state governor either at the Blount Mansion or the Federal Barracks, where the old courthouse now sits. To that tribe what is now Knoxville was “Mulberry Place.”

But the mounds are the last earthen structures that the pre-Cherokee left us to see and wonder about who built them.

If you’ve walked or run the crushed gravel greenway through the Sequoyah Hills neighborhood you probably passed right over the Indian Mound there. The historic and scenic section of Knoxville is on a Dogwood Trail and the mound there is notable.

It is a bit unusual to see a pre-historic burial and ceremonial mound in the median of a street but Cherokee Drive passes on both sides. The walking, riding and running trail runs along the center of the grassy divide and then across the mound. There’s a historic marker there to remind people where they are but it still seems odd to cross over a Native American Mound like that.

Today there are fine homes on the hill to the north and a community park to the south. Long before settlement and probably long before the Cherokee other Native Americans resided there in a large village between the mound and the Tennessee River.

If you’ve taken a ride on the River Rambler you’ve seen the Brakebill Mound, but probably didn’t know it was there. A large house sits atop the mound where, in early settlement days, a pioneer fort was located.

Gilliam Station was an outpost at the forks of the French Broad and Holston River, where the two rivers join to become the Tennessee. Some of the Gilliam family men were killed during the Cherokee wars. A blockhouse or fort was built by Devereaus Gilliam about 1787 atop the mound near the site of a pioneer ferry. Today the site holds a private home.

The large mound had been the center of a village and, by some accounts, a rusty metal sword was found in the mound in the 1800s, leaving historians to consider that Spanish explorers may have visited there in the 1500s. The mound was also investigated in 1979.

Near the corner of Joe Johnson and Chapman Drive on the University of Tennessee campus is a burial mound that was built as early as 644 AD by Native American of the Woodland Period. The site is on the Agricultural Campus and was the site earlier this year of a special dedication.

On the “National Register of Historic Places” the mound was visited by various UT officials and Principal Cherokee Chief Michelle Hicks. While the mound was not built by the Cherokee, the tribe has taken responsibility for many Native American sites in the southeast, their former homeland.

The mound is a landmark on campus and is surrounded by green space within the UT Agricultural Campus and part of UT Gardens. Within the garden are plants native to Tennessee.

The Indian Mound Park is a long-term project to encourage educational opportunities and contains the “Cherokee” names of plants as well as the seal of the Eastern Band of Cherokee.