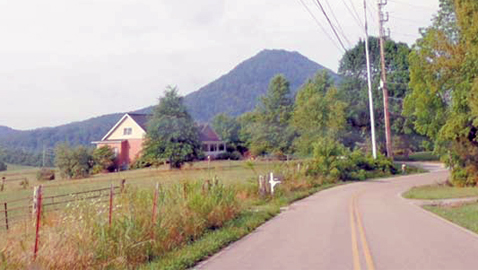 Two routes are main arteries to the North Knox County region: one a main highway and one a local byway with a connection to history.

One is Rutledge Pike, which shoots off of Magnolia and runs as Highway 11W through upper East Tennessee all the way to Bristol.

The other, Washington Pike, was once a main route and today serves Knoxville from where it starts at Broadway and until it disappears just north of Blaine.

Why “Washington” Pike? You might guess it once lead to Washington, D. C., but actually it ran to old Washington County, Virginia. Built or began about 1777, Washington Pike was one of the early roads in our region.

The road, or pike, has two separate personalities.

In Knoxville, at Broadway, the pike runs north through neighborhoods of mixed housing and passes Belle Morris Elementary and Richard Yoakley School. Just off to the left going north is Whittle Springs Golf Course and various neighborhoods. The road takes a sharp left at Millertown Pike and goes north under I-640 near Knoxville Center Mall to the new Target Shopping Center.

The pike turns right at the traffic light and, just about a quarter-mile on the left is the New Harvest Farmer’s Market, which offers fresh produce and crafts every Thursday afternoon. The market building there also serves as a voting precinct and the playground and splash-pad is always full of children playing during the summer.

In that section of the road German and Swiss immigrants once settled. The Babelay family operated a large greenhouse there in the early days and in 1887 a railroad was built and parallels Washington Pike for several miles.

A crossroads community developed at Washington Pike and Mill Road after the Civil War and was mostly settled by African-Americans. The Oak Grove AME Zion Church there was founded about 1868 and the current church building was completed in 1926. Like many early churches it has a churchyard cemetery behind the building.

Beyond Oak Grove AME, Washington Pike changes to become a rural route, speckled here and there with large and small homes, large farms, and several other churches. The roads leading off of the pike have street signs with the names of people who live, or lived along the routes, such as Jones Road, Bud McMillan Road, Bozeman Lane, Acuff Lane and Homer Smith Lane.

Ritta Elementary School is on the right side of the road and this Knox County facility has about 630 students and 40 teachers. Just beyond the school is the Northeast Knox Utility District, which serves homes in the area.

Continuing on up the road you come to Maloneyville Road, the location of two important places: the Knox County Sheriff’s Detention Facility and Three Ridges Golf Course. Both are just about ½ mile between Washington Pike and Tazewell Pike, with the golf course surrounding the jail property on three sides. From there on you’re basically in the Corryton community which is just east off Washington Pike.

One of the surprises along the north section of the pike is at 8650 Washington Pike. The House Mountain Farm is a boarding and training facility near the base of House Mountain. The farm has spring-fed ponds, miles of trails, and great views. Liz Green owns the farm and is active in all aspects of its operation, including caring for the farm’s horses and boarding horses for owners.

The farm offers lessons in riding and jumping not only for adults but for children as well. Day camps for children are in May, June and July. The facility offers folks a chance to learn about horses and horse ownership before buying a horse. You can contact the House Mountain Farm at 687-8159 or email them at hmfeventing@gmail.com to schedule a lesson or take a tour.

You are in the immediate neighborhood of House Mountain after passing House Mountain Farm. House Mountain was named when settlers or explorers saw it and thought that it looked like the roof of a house from a certain angle. It stretches for about three miles and was once the site of television towers.

Some eight miles from Knoxville House Mountain is a State Natural Area that boasts 525 acres of area, unique boulders, lots of wildlife, and two peaks. It’s an offshoot of Clinch Mountain, just to the north, and from atop you can see the Smoky Mountains and several other far-away mountains including the Cumberland range.

The Knox County Parks and Recreation and the Tennessee Department of Environmental and Conservation jointly manage this park. There are several hiking trials on the mountain, from moderate to difficult, and the Crest Trail runs the entire length. Two of the 5.8 miles of trails lead to the summit.

The easiest way to House Mountain from Washington Pike is by turning right on Bud Hawkins Road and following it to the park’s parking lot. There you can read information about the mountain and the trails there.

Just a bit further up the pike you’ll cross the historic Emory Road and the pike ends at Highway 61, just north of Blaine. You can turn right on 61 and right again at Blain and return to Knoxville by way of Rutledge Pike.